BRING ON THE BASS

Last week Sharon and myself took the dogs for a walk along another estuary river close to where we live. The weather was sunny with a nice wind which kept you cool as the temperature started to go up. The tide was just starting to come in as we reached the top of the sea wall which meant I could see where the deeper water was.

We walked for about a mile until we came to a sharp bend in the sea wall and where the deeper water looked to be closer in. As i walked round a bush saying to myself how this area looked ideal for a spot of fishing in front of me were 2 old boys waiting for the tide to come in some more. After a good chat with them some good local information was given and greatly received. Apparently this is a good area for bass, with some good size fish being caught too, as well as mullet. Throw in some flatties and eels and alls good.

Well that made my mind up to give it a go here in the next couple of weeks when the tides right, as not only is it barely fished, its also pretty, quite and not too far a walk. Also i can bring the dogs along too which is a bonus. As Sharon and I sat on a bench near to the corner we could see a couple of seals popping their heads out of the water on the opposite side of the river. As Harry splashed about in the margins in front of us the seals got more and more curious and slowly made their way closer to us, popping there heads up every 10 yards or so. It was great to watch and was Sharons first glimpse of wild seals.

This morning i was up at 4.30am and drinking a cup of tea whilst making my sausage sandwiches in anticipation of a good days tenching at a local club water. It was misty outside which added to the excitement as i started the truck engine and set of to my destination. Upon arrival, a little later than i hoped for, the sun was rising but shrouded by low mist and the water had a lovely whisp floating above it. A classic tench fishers morning.

I spent the next 45minutes watching the water for signs of tench activity but unfortunately all that was showing was a few silver fish, not even a carp was seen to bosh out. Pretty odd really as this is quite a visual lake as you always see fish of one sort or another moving around in the upper layers. A decision was made and i was loaded up and making my way around to the opposite side of the lake where there was a large gap between the slumbering carpers. It amazes me how most carp anglers sleep in late while they are fishing. Early morning is the best time to watch for carp activity, and shortly after setting up i could see a few milling around in front of one dozing carpers swim.

Two rods were set up after a little cast about with the marker float. One was going to be a method with a whittled down white amber strawberry boilie, fished over a large bed of hemp, pellet and some broken up matching boilies fished no more than 15ft from the bank in 8ft of water. The other was maggot fished helicopter style above a maggot feeder cast over a light spread of hemp, pellets and maggots. This was cast 50ft out in roughly 10ft of water. Both rods were to my left in a small kind of bay area. 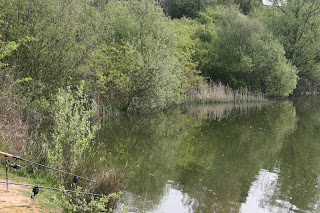 It was a nice comfortable swim so after casting out the rods on went the kettle and i sat there contently all at peace with the world. What a load of cobblers, i sat there with a sore finger because i burnt it lighting the stove, a wet hand as i,d spilt my tea, and deafened by the constant roar of the traffic as they thundered up the road behind me. But at least i was fishing!!!!!!! 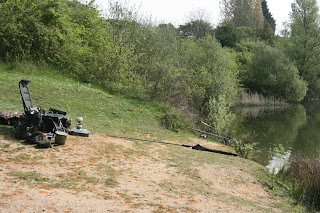 Well i fished until 2pm and only had the one full blooded run which unfortunately amounted to nothing. I had a few knocks on the method though which is always a good sign. I did see a very large tench roll 10ft from the bank in front of the swim which means i was roughly in the right place. On walking back to the car i saw quite a few carp cruising the margins just below the surface which i reckon means its about time to crack out the floaters.It was an enjoyable mornings fishing which taught me a few more things about the water, now all i need is to actually catch something................................. 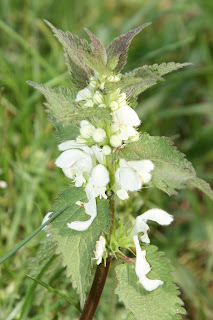 Nettle flower
Posted by BRYANS ANGLE at 17.4.11 No comments:

I,ve come to the tough decision that i have to sell one of my fishing boats as i barely use it any more and i need the space. The boat is a Shetland 535 Fast fisher 17ft glassfibre jobbie with a tuned 40hp yamaha outboard on the back. The boat itself is ready to go fishing with all steering and morse controls working fine. The gelcoat is a bit flat but sound, theres no holes or osmosis and just needs water. 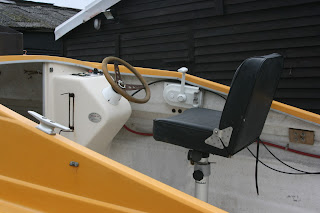 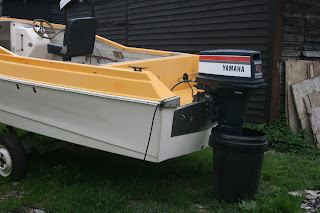 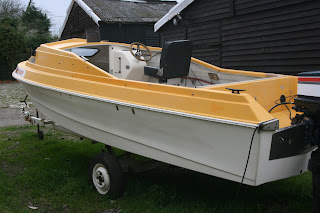 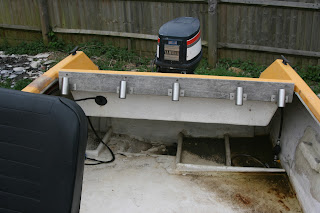 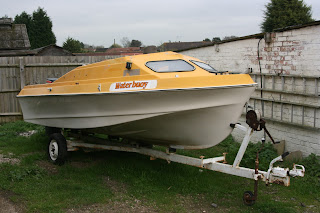 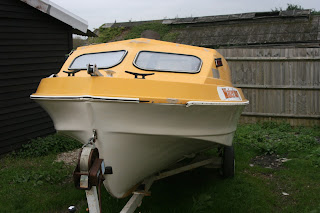 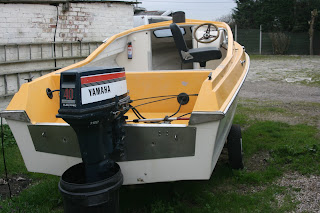 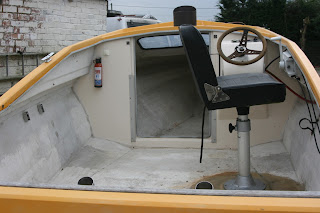 The outboard is a Yamaha 40hp and was rebuilt a few years ago and has only been used for a few hours and is in immaculate condition and runs fine. Its electric start and needs an external fuel tank. As the pictures will show its immaculate. 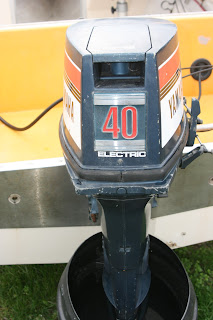 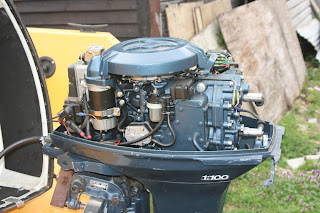 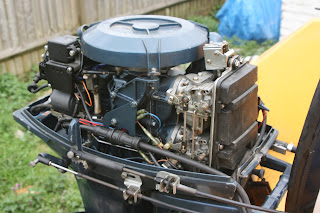 The trailer needs a little bit of work, new wheel bearings and possibly a little welding here and there.
All in all its ready to go and is ideal either for sea fishing or pike fishing.

I,m after £1200 which is a good price considering what i,ve seen them going for on ebay. The boat is stored near to Basildon in Essex and you can email me to arrange a viewing or ask any questions: waterbouys@hotmail.co.uk.

I had a spare morning this sunday gone so i,d planned to have a few hours after the tench at a local club lake. I,d cooked up some hemp and giant maize the night before  in preparation for laying a good bed of bait out. I,d already soaked the hemp in water, hemp oil, salt crystals and some liquid betaine to add a wee bit of sweetness, then boiled the life out of it for an hour until it split. My plan was to bait up a margin spot liberally with the hemp and then find a nice clear spot further out and give it a good carpet of the little seed. Then i was going to fish a nice hempy, oily method mix with lots of molasses over the top of both, probably with sweetcorn as hookbait.

Well i arrived at the lake just after sun up and found a nice corner swim with lots of over hanging bushes in the margins and i also spotted a couple of bream rolls about 30yds out so they made a good bet for one area. I set about spodding out my bait and had two rods fishing within 45 minutes of arriving. 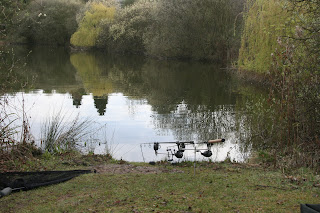 With one rod just to the right in front of a nice big willow, in a depth of roughly five foot i was confident that this would be irresistable to any passing tincas. The other rod was fishing in open water just past some weed roughly where i had seen the bream roll earlier. With the traps set i settled down with a nice cuppa and a fresh coissant in anticipation. 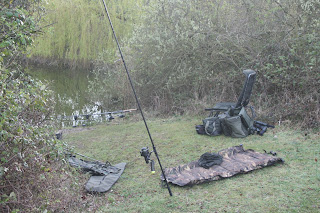 After half hour or so i started to get a couple of little knocks and bleeps on the alarm, here we go i thought any minute now. Unfortunately nowt happened. Over the course of the morning i continued to have single bleeps on the alarm but nothing actually took the bait. I was recasting every 30 minutes to freshen up the method but still nothing materialised. 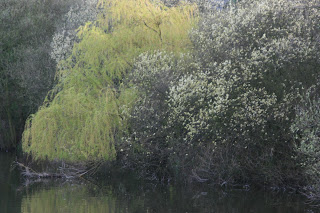 With cover like this i couldn,t beleive that i didn,t manage to catch anything. Maybe the fish were further up the lake in the deeper water still. Never mind as i,ll definately be back to give it another try. I thing that this corner is going to produce well during the early summer, i have a feeling in my water.

Well i didn,t blank in the end as i,d packed my light lure gear and managed to winkle out a small jack of roughly 2lbs in the next swim on a small rubber shad. Good fun and most enjoyable for a couple of hours of a sunday morning.
Posted by BRYANS ANGLE at 7.4.11 No comments: