I,,ve been fishing a few times this year but to be quite honest the fishing has been a load of crap. I,ve blanked for pike on two venues, both stillwater and rivers. I,ve also blanked once for perch in my banker areas. Whats going on??? 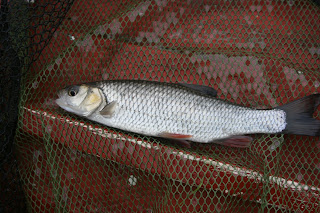 I have managed a couple of fish but nothing to jump and shout about.

A nice chub of around a pound or so on my floatfished lobworm. 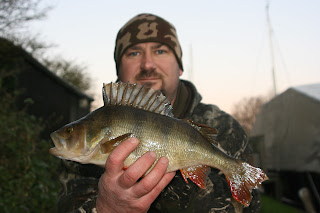 Had this lovely 2lb perch as well.

A few weeks ago Ryan and myself fished the Fens for a weekend with our expectations high with the thoughts of big pike and glass eyed zander rolling through our heads. We opted to fish a drain that we havn,t ventured upon before to see how it fairs compared to our usual haunts. After a bit of driving around we found a nice looking stretch and set about roving along its length. After a couple of moves I had a run on my livebait but totally missed it as I was day dreaming. We moved along to the start or a reeded area and swung out our baits, my two being a free roaming livie and a deadbait and Ryans being two deads. Within 5mins I had the shout from Ryan to signal he was into a fish, as I got closer to him the shout turned into a more urgent "hurry the fook up its a goodun" tone. And she was a goodun too, after a couple of runs I deftly, I,m getting good at netting other peoples fish, scooped up the pike and proceeded to carry her up the bank. She was a big girl for sure but still quite thin and on the scales she went 22lb exactly, his third Fenland 20lber, two from the Ouse and this one. To say we were both well chuffed would of been an understatement.......................... 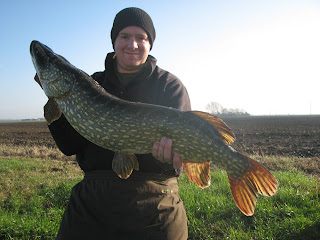 The rest of the weekend resulted in a couple of jacks to me and a 5lb zander to Ryan. But the sight of that beautiful big pike made it all worthwhile, and as the picture shows it actually put a smile on The Miserable Ones face :)
Posted by BRYANS ANGLE at 31.12.11 No comments:

After waiting for ages I,ve finally managed to get my custom fishing dinghy afloat. My Dad has made this from scratch in glassfibre to my specifications, its only a small easily manageble 8ft 6in glassfibre dinghy which has been built to take two big blokes and a bit of tackle. The idea being that I can use it on a couple of local rivers as well as take it up the Fens and use it on a few of the drains and smaller rivers there. 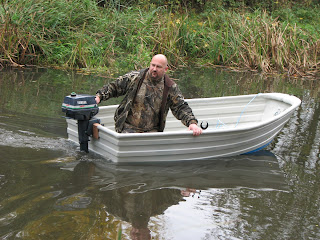 It may look small but its perfectly formed. Its got a flat floor which has glassfibre sealed epu foam beneath it which gives it exceptionally bouyancy so this baby isn,t going to sink. With the moulded ribs its also really stable. And thats a 4hp yamaha on the back which pushes it along lovely. 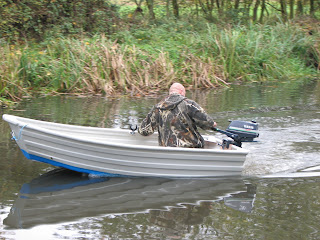 We used it on a local river and poodled of to fish behind some boats at a near by marina christened her in style with Ryan managing 2 perch over 2lb to just under 3lb. I had 2 pike of 3lb and 8lb on my livies as well as a lovely perch of 2lb 10oz. Oddly I caught these three fish on small live perch I,d caught earlier, a bait I,ve not used before as I,d heard that it wasn,t much good. Well I,ve decided that I,ll be using them in the future thats for sure 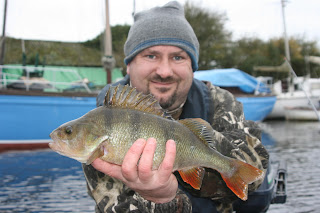 I,m looking forward to giving this little fish catching machine a good try out over the next few months. Also I,ve just bought a 12ft open kayak which is manageable by one person so that will be good fun for me as well.............
Posted by BRYANS ANGLE at 1.12.11 No comments: