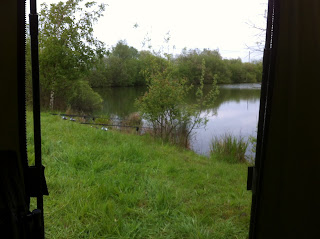 How can you not feel relaxed just by looking at this picture?????

I finally managed to grab a couple of hours fishing yesterday evening as the better half is away on hols for the weekend. Surface fishing for carp was the order of the day, and with my tackle all loaded up of I set for the gruelling journey of half a mile up the road. Its quite handy living in the back of beyond as within 5 miles I have at least 5 different fisheries i can tackle.

Well I arrived and was shocked by what I saw. The club water I was planning on fishing has 8 small pits all old and heavily planted with bushes, trees, lilies, reeds etc and all attractive in their own right. One of the pits I fish is/was heavily planted with bulrush and reeds and has numerous hidden swims where you can easily tuck yourself away and catch numerous species of fish. Well look at what they have done to the place. I cannot understand why they have raped this pit like this, there was absolutely no need. 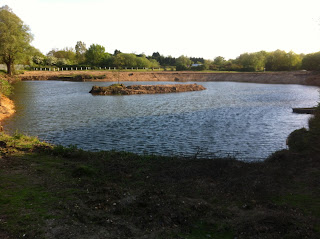 Well after seeing this disgrace I set off to fish one of the other pits on this complex. After flipping a few mixers into a couple of likely areas I sat back and waited for the carp to show. By the way I flavour my mixers with fish oil to enhance their attractiveness to the carp. They give of a nice little oil slick around each bait. In next to no time I spotted a few dark shapes drifting below the freebies and then a pair of lips sucked down a mixer and the others followed suite. I,ve noticed this over the years, that the carp quite often just swim beneath the mixers until one of them is brave enough to take one then they all join in. After giving them a few more mixers and letting them get a bit more confident I dropped in my bait. I only fish close when surface fishing as part of the fun to me is actually watching the carp slurp down my bait. The fish weren,t particularly big but I knew they wouldn,t be, but I don,t care as this is just for thrills fishing like this. Over the course of 30 minutes I managed to back 3 hard scrapping commons upto 6lb before I moved of to a new swim. 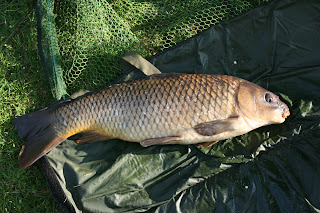 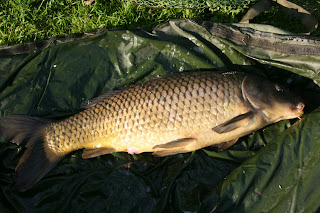 After moving around the pit I found a nice secluded swim with some reeds in front and a nice overhanging bush to the right. I,ve had fish from this swim before so knew where the carp would be holding out. A few mixers were flicked beneath the bush and I sat and waited to see if any fish were at home. After a few minutes a nice pair of lips rose to the surface and gently sipped down a mixer. Over a couple of minutes the carp repeated the process. I lowered my bait down to him but unfortunately I must of spooked him as he didn,t come back up. I did notice a few cruising literally at my feet so dapped my mixer in his path and he took it straight away. After a nice tussle a small mirror of around 4lb was on my unhooking mat.

A move to another pit didn,t produce until after an hour as I was about to go home I spotted a fish beneath an overhanging bush. A few freebies flicked out followed by my hookbait and straight away I was in. After a good scrap I banked a lovely common off about 10lb. 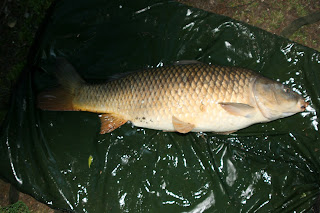 That was it for evening, a nice beef stew I hand in the slow cooker was calling. An enjoyable couple of hours was spent chasing pasties, its just a shame about the pit BDAC have destroyed, they should be ashamed.

I,ve been sitting in my office all day catching up on paperwork and all I can hear outside is bloody rain. I know we need as much as possible as the reservoirs are low and the rivers need a good flush through, but i,m getting bored with it now. My job is 100% dependant on weather so as you can guess I havn,t been able to do much over the past few weeks as we keep getting rained off. Having a bit of spare time is fine with me but unless I want to get soaked I can,t even go fishing, so i,ve been stuck in the office catching up on paperwork or in my warehouse building shelves and tidying up. Nevermind i,ll live I suppose.......

As mentioned i,ve barely been fishing since catching my pb bream. Ryan and i did manage a weekend on our new water, where I blanked but he had a cracking mirror carp of 28lb 6oz which made it all worthwhile. I know it sounds like a cop out but as long as one of us catch I deem it to be a success, even if the captor is not  me..

Guess what, it rained there as well.... 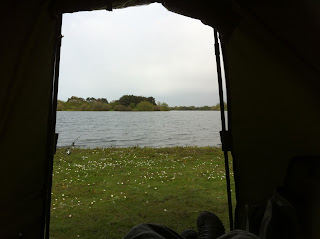 I,m off caravaning to Sussex this coming bank holiday weekend and do you know what the forecast is for?? Yes you guessed it, rain all weekend. Nevermind, we won,t let it dampen our spirits as i,ve got some juicy local sirloin steaks on order ready to be slapped on the bbq, and a big brollie to cover said bbq. I,m also taking my sea fishing gear and will have a dangle come rain or shine....

One thing I have been doing, due to not being able to work, is start to kit out my new fishing room. Its not finished yet but as you can see its coming along quite nicely. 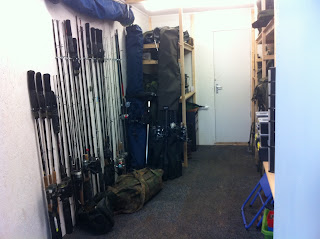 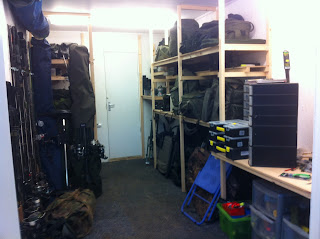