A few days ago i managed to skip work a little early and decided to grab a pike rod and go fishing on a local river for the last couple hours of the evening. The weather was clear skies and actually quite warm, not ideal conditions but to be honest i didn,t really care as i had an itch which needed to be scratched and only a spot of fishing could reach it.

Soon as i arrived i set about catching some bait as i,d only brought one pike rod and wanted to walk up the river using a free roving livebait as bait to see if anything would grab hold, as i,d not fished this stretch for pike much i thought this technique would be the way to go to try and help me get a grasp of the river. After half an hour i had 6 nice size baits in the bucket so i stashed the bait catching rod back in the truck and set off up the river. Theres a lot of boats on this stretch and i like to fish a float close to these when i target the perch here, so i did the same with my pike rod thinking that they would be in similar areas hiding in the shade out of the sun. 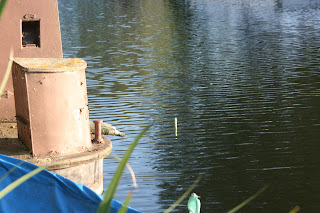 I like watching a float as it trots in and out of the margins as the livie tows it behind as it does what it does. After a few minutes in my first spot the float shot under so quick it actually made me jump, a quick strike and a nice thump thump on the rod tip showed i had a fish on. After a few more thumps the biggest perch i,ve seen rolled on the surface and at the same time threw my livie and hook back at me in disgust. Now that was a BIG perch, thers been reports of 4lbers caught from a little further up this area and i,ve had them to 3lb 2oz, but this beastie was definately a lot bigger than my pb. I stayed in this area for a while but nothing more happened so i trotted of a couple boats away. After dropping the float back in it shot under again within a couple of minutes and i could see i was attached to another big perch, which again spat back my tackle. I reckon that the baits i were using were a bit too big for the perch to get in their mouth properly, small enough for them to have a go at but not small enough for them to fully engulf before i made my strike, and i won,t leave them to swallow the bait as that would only result in a deep hooked fish which is no good. 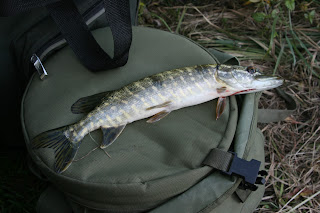 Every time i moved i would get a take on my livie, most of which i am certain where from perch as when i reeled in the bait it had no teeth marks. I did make contact with this tiny pike which kept throwing itself around as i brought him in, which is always good to watch. I also bumped of a bigger pike of around 6lb which came of at the net.

All in all i had a really enjoyable couple of hours fishing and its really got me thinking about big perch now .
Posted by BRYANS ANGLE at 20.10.12 No comments:

My sites going from strength to strength, i,m getting in more stock weekly from various manufacturers and have recently unpacked the full  PIKE RANGE  from 30 PLUS.

Tackle brands i have in the shop are:

As well as lesser known brands. Pop in and have a look as i,m sure you will be impressed with our stocks and pricing. Keep popping in too as i,ll be running some big discount promos soon.
Posted by BRYANS ANGLE at 1.10.12 No comments:

Heres another nice easier recipe for cooking on the bank whilst waiting for a screaming run.

RUMP STEAK AND MUSHROOMS IN BRANDY AND PEPPERCORN SAUCE 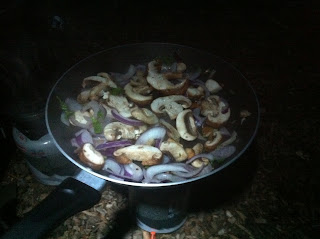 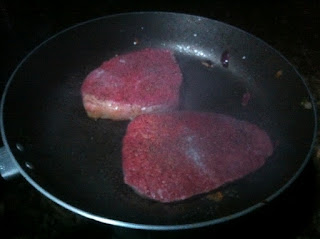 Next season your steak on both sides with salt and black pepper and chuck in the pan. Have your heat turned high to get a good colour. Cook until its done how you like it, rare medium etc. I like my medium well done so it took about 10 minutes or so. 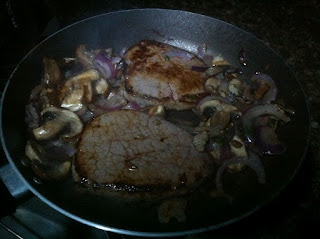 Then tip your onions and mushrooms back in the pan with the steak and let all the flavours mix for a minute. 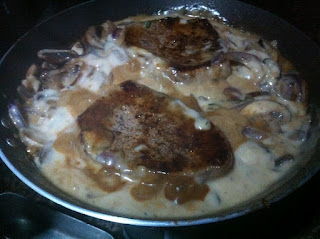 Next pour a packet of the Brandy and peppercorn sauce around the edge of the steak and heat for a few minutes until its bubbling, then stir it all about with the onions and mushrooms. I,ve cheated by using this ready made sauce from asda, but can asure you i won,t do it again as it wasn,t really to my taste. I,ll make my home made cracked black peppercorn sauce next time as its really easy and much tastier. 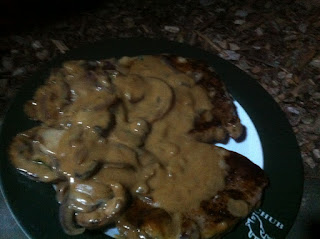 Place your steaks on your plate and then pour on the sauce, onions and mushrooms. Lovely.

Easily cooked and only took just over 15 mins from start to chomping.

Weekend before last i managed to blag a nights fishing on my syndicate lake as i,d been a good boy and the missus gave me the green light to go. Before she could change her mind i had my gear in the truck and was rumbling my way along the back roads towards the lake on the saturday afternoon, with plans to fish the night and best part of sunday. Weather was bright with patchy clouds and forecast to turn windy and unsettled. Just the way i like it.

Eventually after a walk round the lake and a chat with a couple of members i opted to fish a nice comfortable point swim which looks across a lot of water as well as a nice bay area to my right. Up with the carbon compact, gear arranged inside, kettle on, and i was ready to start a nice gentle, methodical set up of the rods. I,d already spent a bit of time locating areas in this swim and had spombed some boilies out on one spot, particles on another, and my third rod was going to be just using an oily stick mix. Stick mix was the first to be cast out 80 yds or so to a clear area near some reeds. Then the rod over the particles was flipped out 10yds up the margin on a lovely gravel area amongst some weed. Finally a balanced boilie was cast out over my spombed bed of boilies around 50yds out in a deep gulley type area. Being satisfied with the rods i plonked myself down and awaited the action. 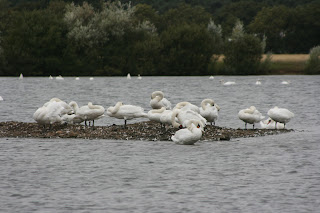 Well it didn,t come...The only time the delkim sounded was when a bloody swan swam through my line, theres dozens of them here. I suppose the fact that the other lads didn,t catch either is a bit of a consolation i guess. I don,t know what it is but carp are my bogey fish. They,re meant to be easy to catch but i don,t seem to have much luck. Mind you i,m not actually that bothered as catching them doesn,t exactly light my fire, i only really fish for them to get my fishing fix during the summer while i wait for the winter pike fishing to come around again. Which is really really soon.............................

I suppose the best thing about this trip was that i cut it short and left for home about mid day as the weather reports were for rain. I drove 5 minutes away from the lake and it absolutely heaved it down with rain for the rest of the afternoon and through out the evening. Missed it, resuulltt !!!!!!!!!!!!!!!
Posted by BRYANS ANGLE at 1.10.12 No comments: