A COUPLE HOURS WITH THE LURES

On saturday whilst sitting in  t he office working on my website i got the urge to have a go with some soft lures on a local river and try and catch a perch or two. I dug out my lightweight kit, picked some soft shads and set off to fish the River Chelmer for an hour or so before going home for some scran. When i got there the river was as expected, a milky tea colour and pushing through a bit. I walked for a mile or so tossing 3 inch kopyto,s into every likely looking spot but not even a nibble. I kind of expected this as the sun was high and strong and there was a stiff breeze blowing. After about an hour i admitted defeat and trudged back to the van, but before setting off for home i crossed the bridge and spoke to a guy fishing for chub on the opposite side of the lock to where i had been fishing. While i was chatting with him i noticed a lot of dace topping in the slower water so decided on 5 mins fishing there before going. Because of the water colour i decided to try a bright golden orange soft four play and flipped it across the river. After 5 casts or so i had a thump and pulled into a spirited pike of about 4lb which scrapped all the way to the bank. Unfortunately i forgot to take a picture as i was that surprised at catching. I slipped him back, grabbed my gear and set of for home most happy with my 1.5 hours lure fishing. I must do it more often.
Posted by BRYANS ANGLE at 24.2.14 No comments:

A couple of weekends ago i had the urge to have a bash for the flounder that supposedly run up Benfleet Creek at this time of year. Parking up by the boat club creek on Two Tree Island i loaded myself up with all the necessaries and grabbed Oscars lead and off we set for the long walk to the spot that i wanted to try. Now when i,ve walked to this spot with just the dogs it doesn,t seem that far, but now that i had all my fishing gear, bait, food, water for me and also for Oscar it seemed that the spot was in fact the other end of Essex. I was bloody knackered by the time i got there a good 2.5 hours before high water and it took me a good 5 minutes recuperation before i could even think of setting up my stall. Boy do i need to loose some more weight and get fitter, especially as during the spring i want to take a walk from South Fambridge along the river to Creeksea. I don,t know how far this is but its got to be at least 5 miles along the top of the wall, not that far i know but bear in mind i,m 6ft 16 and three quarter stone with a dodgy ankle and bad lower back, its going to get me huffing and puffing for sure. 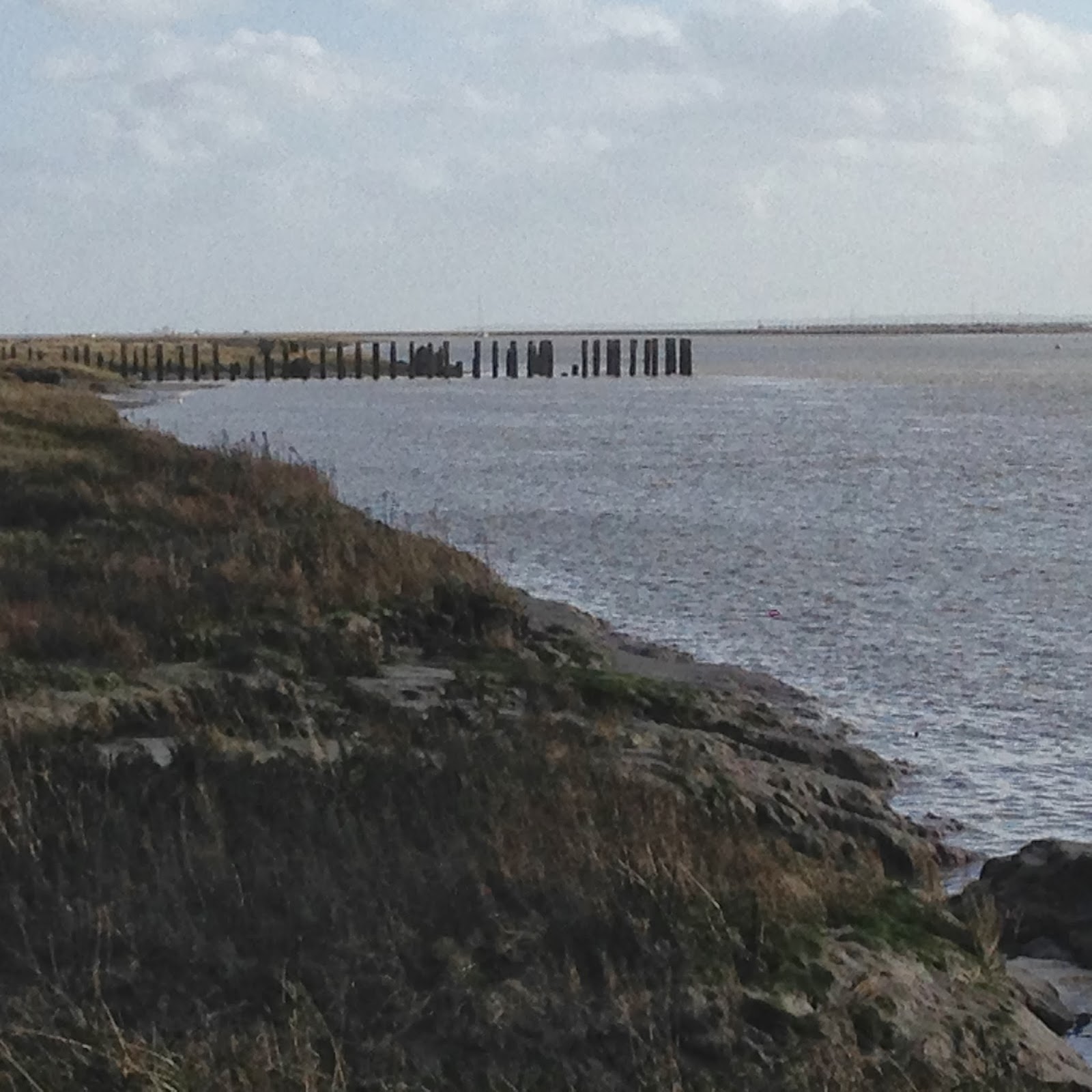 Eventually i got my breath back and started to set up my rods and tie my rigs. I was using 2 hook flappers on one rod and 1 up 1 down rig on the other. The gully was only a gentle 30 yard lob so i thought i,d only need a 2 ounce lead to reach the distance and then gently roll round until it settled in a dip or something. How wrong i was as the tide was thundering through so i ended up using 3 ounce breakaways which even pulled out themselves sometimes. Bait was fresh lugworm tipped with a small cube of mackerel which i hoped would add an extra degree of attraction. Every 15 minutes i,d reel in and re-fresh my bait but it wasn,t getting a touch. 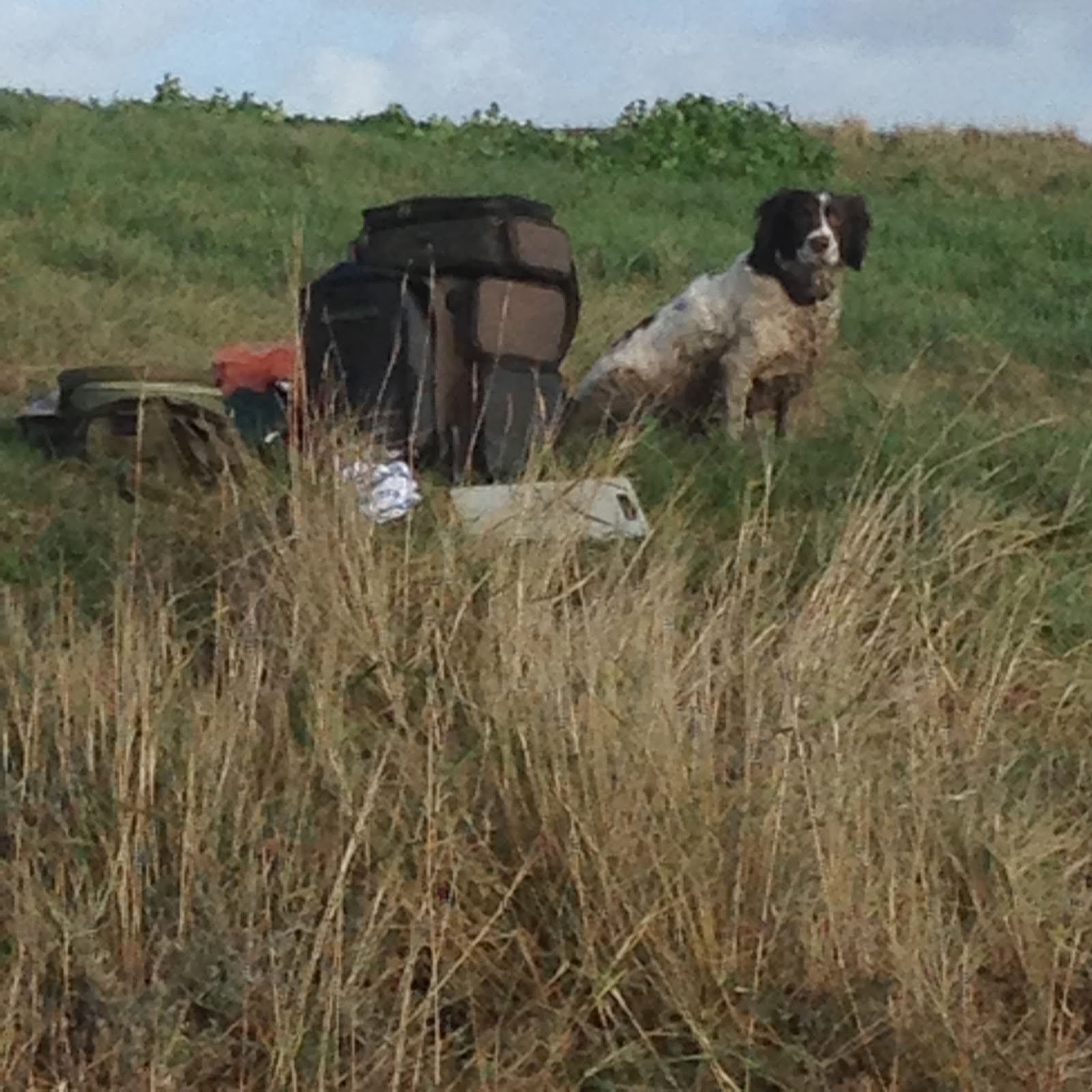 After high water i had a couple of tugs and rattles on the rod tips which i thought might be the start of something good but unfortunately nothing happened. It was nice and sunny but really windy and pretty cold as i was exposed sitting on the bank there so i didn,t last too long after high tide and packed up my tackle and dog and trudged back to the van a little dejected. It won,t stop me trying again though, i might of blanked and got chilled through but i still enjoyed the afternoon, especially as it got near dusk as the thousands of wildfowl that had been sitting on the opposite bank and had been serenading me with their whistles, quacks and honks started to lift and drift around the sky in huge flocks. 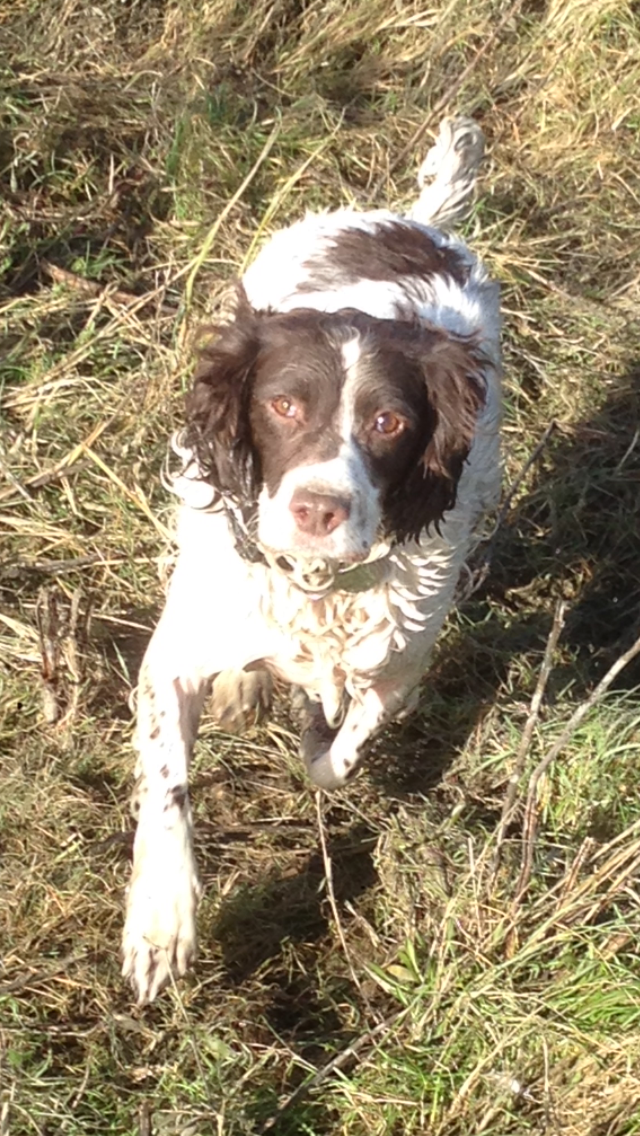 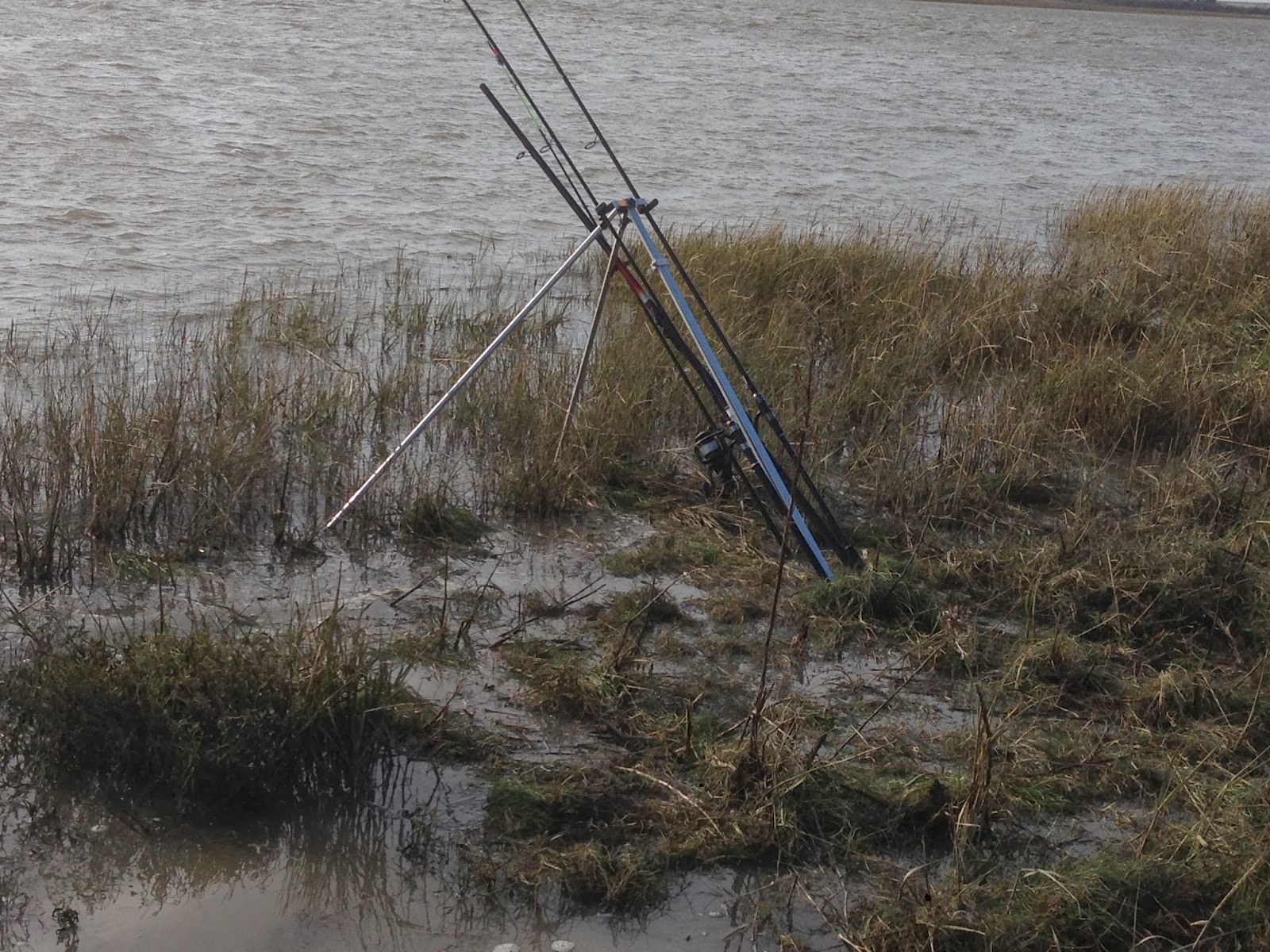 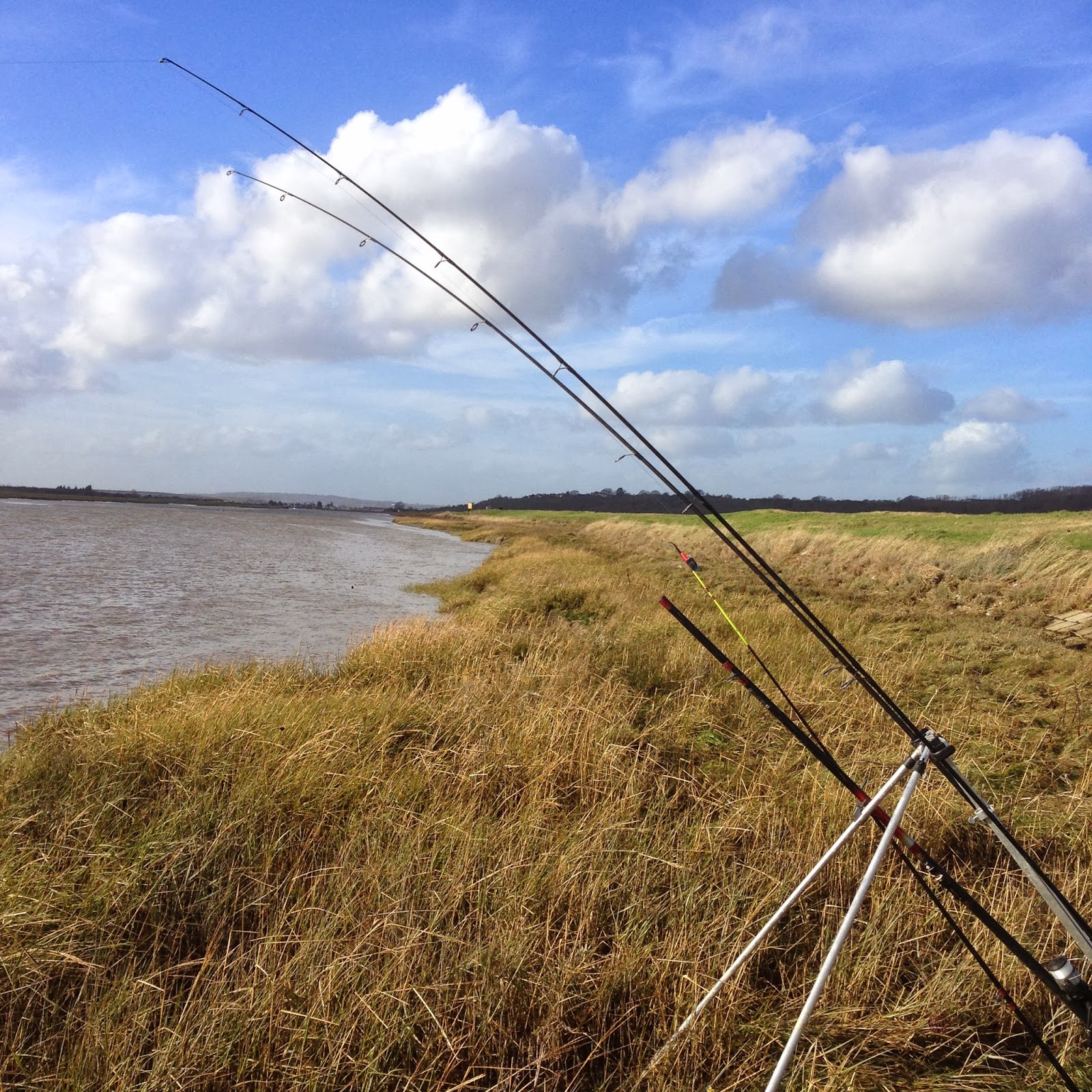 Another thing i noticed was how high the tide actually came . As you can see from the 2 pictures here it actually chased me up the bank, i really didn,t expect that. It didn,t stop me and Oscar The Wonder Dog though as we both love splashing around in the water.

WEEKEND ON THE THURNE

At the beginning of the year I dug deep in my pockets and treated myself to a nice secondhand aluminium dinghy so that I could use it on my own for some pike fishing on The Broads and The Fens. After collecting the dinghy from Norwich I towed back to the workshop where I gave it a clean and checked the trailer for fit for towing, as well as fixed a light board I had lying around. More importantly I fit a towbar to my van so I could actually tow the thing.

After a coupe of weeks fiddling around and waiting for my river license to come through I was all set to go on her maiden voyage. Destination was the River Thurne in Norfolk at a location I had found when we holidayed near Cromer last year. Everything loaded I set off to Norfolk at 5am on a horrible wet and windy Friday morning. Weather forecast was for heavy rain all weekend in Essex but windy and clear in Norfolk so I was hopeful of not getting a soaking. At first light I pulled upto my chosen slipway and proceeded to set up the boat and get her in the water. 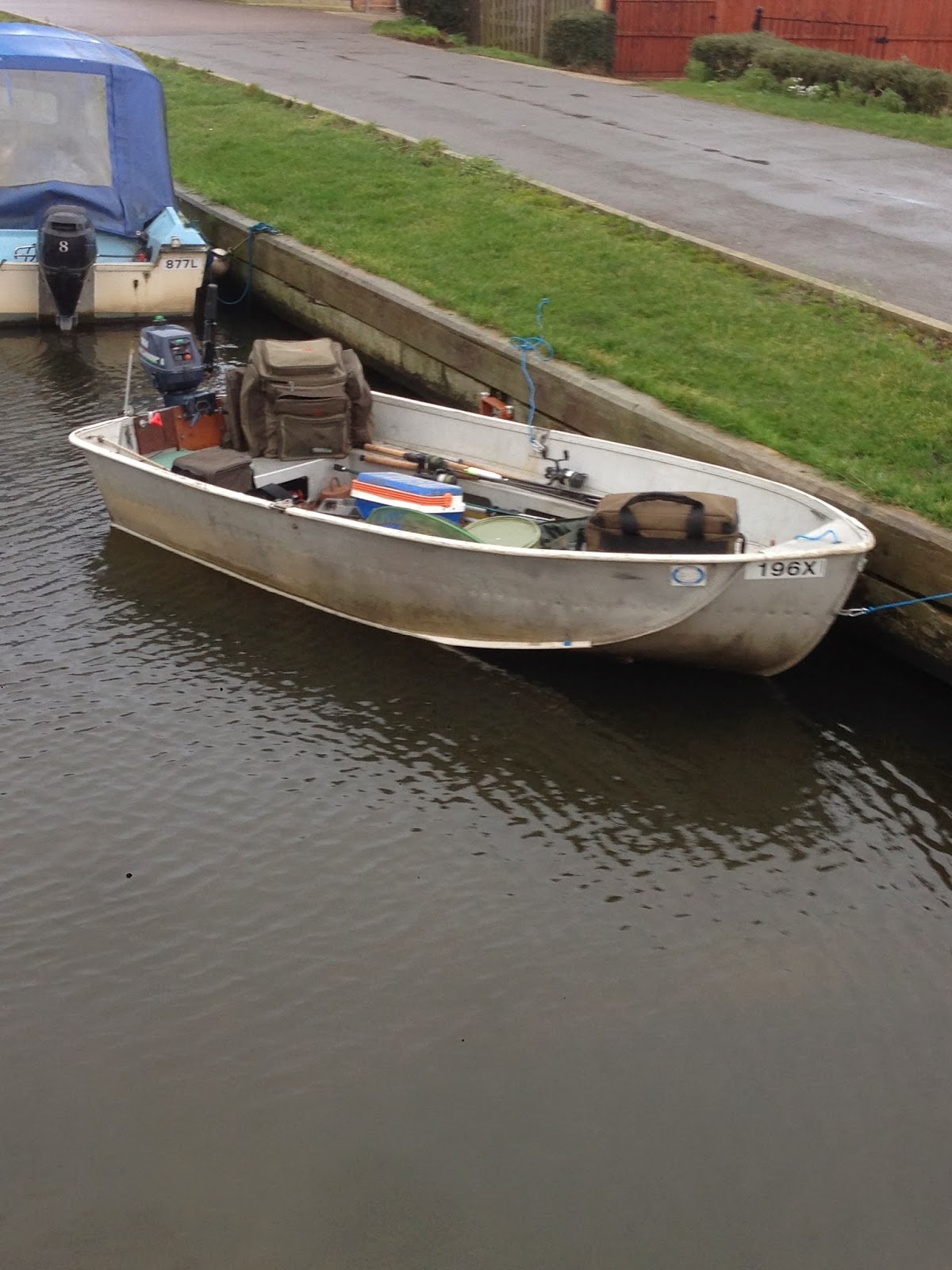 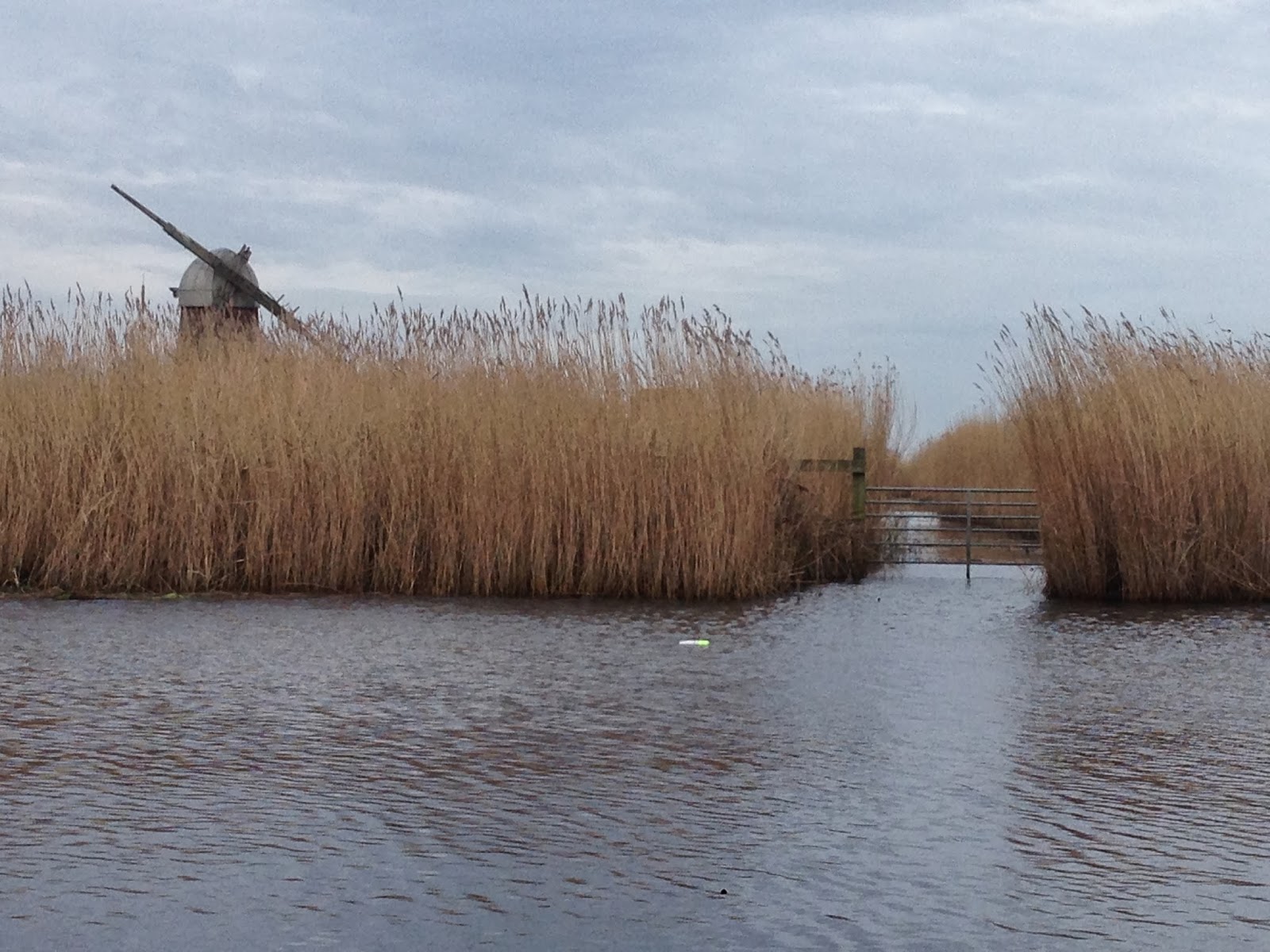 The launch went smoothly and in 20 minutes I was slowly motoring out of the staithe and onto the main river. The engine and boat handled perfectly as I chugged along the river taking in all the sights of the beautiful Broadlands.

I explored the area for a couple of hours getting used to the handling of the dinghy before anchoring up at a junction in the river and casting out my deadbaits into a nice deeper area that I had found.

Well I,m going to get straight to the point regards the fishing that I had over this weekend, I blanked. Nothing on either lures or deadbaits, even though I tried 2 different areas on the 2 different days but all I had to show for my fishing efforts were a couple of teeth marks in one of my herrings. But to be honest I really didn,t care if I caught anything or not as this trip was about getting used to the boat and exploring the waterways of the Broads. 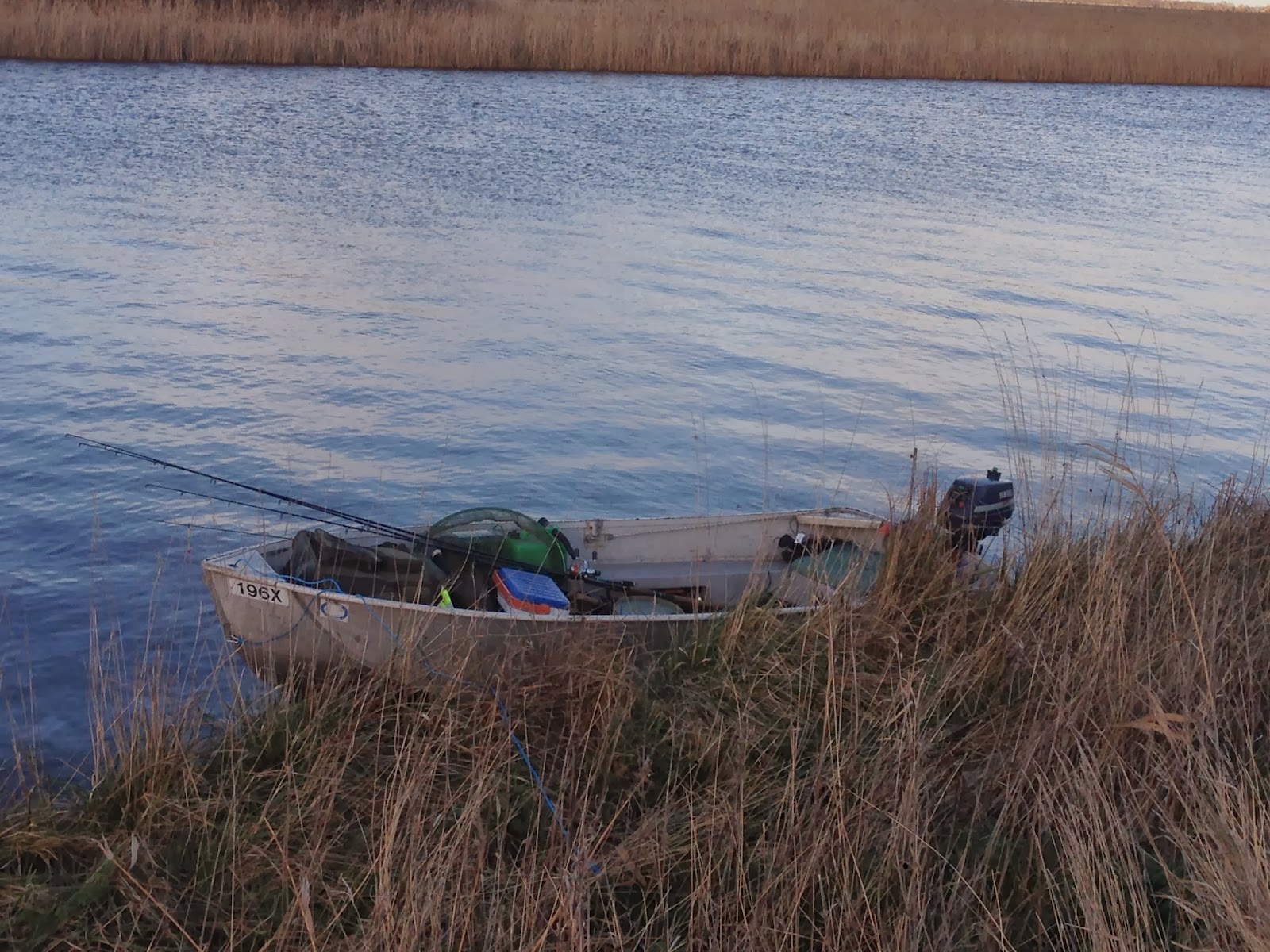 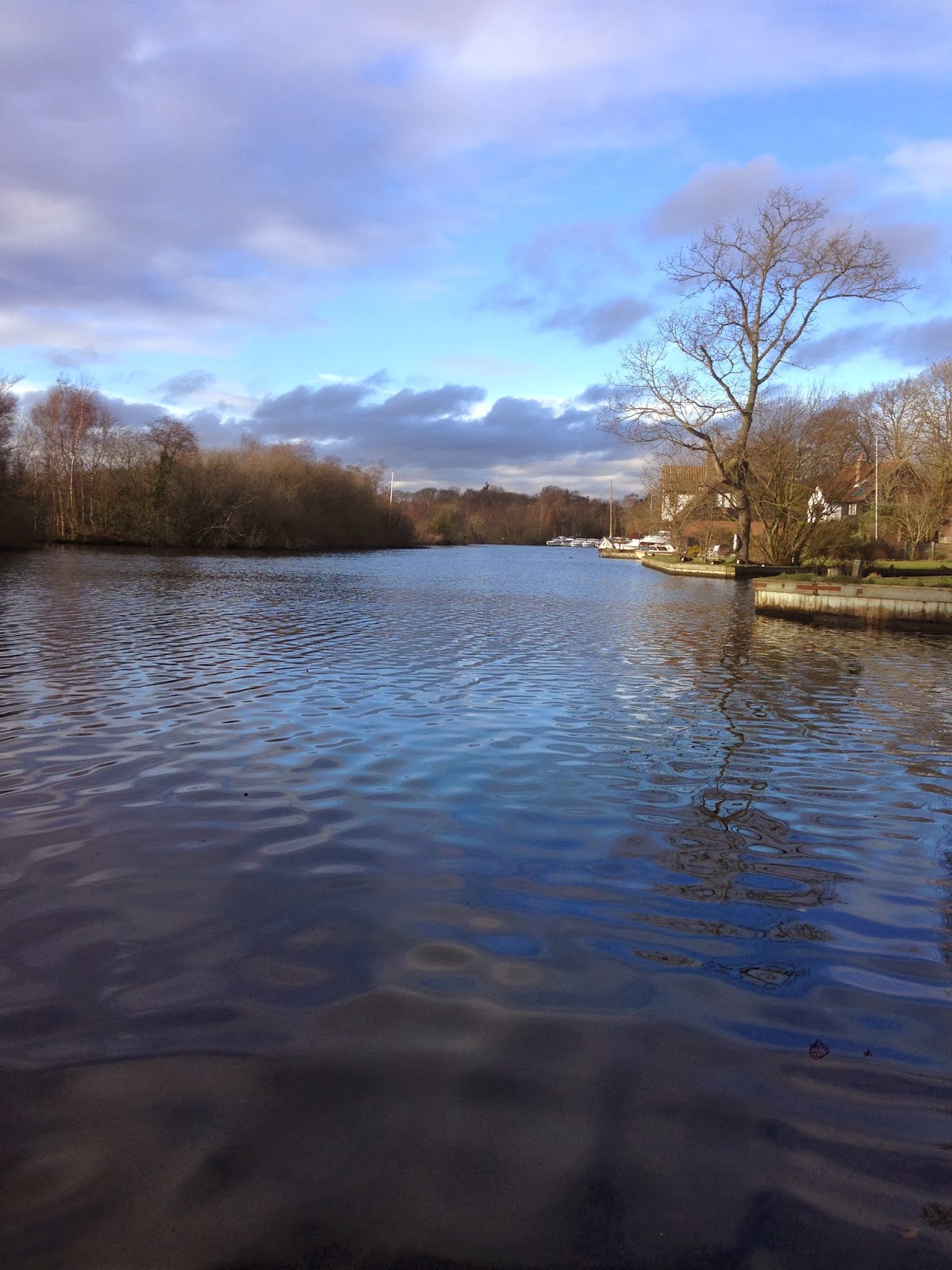 With beautiful surroundings like these fishing was actually second place to just motoring around exploring what the waterways have to offer. The wildlife I saw was amazing with barn owls, ducks, geese and I even witnessed a stunning marsh harrier drifting on the wind over a famous Broad. I will definitely be back for more but unfortunately it will have to wait until the new river season starts.

The boat handled really well but I have a few modifications that I want to do to give it my personal touch. The main thing I want to do is increase the size of the openings to the storage areas it has as they are too small to fit anything of any size in. Once done I,ll be able to fit the fuel cans underneath the front seat area and put my water bottles in the side storage areas. This will free up a lot of clutter that gets under your feet as you move from front to back in the boat. Also I will have to scale down the amount of tackle I take as well, but fortunately by working on the storage I,ll be able to take it out of my bags and put it under the rear seat which again will eliminate more clutter. I,ll post more when I do the work. 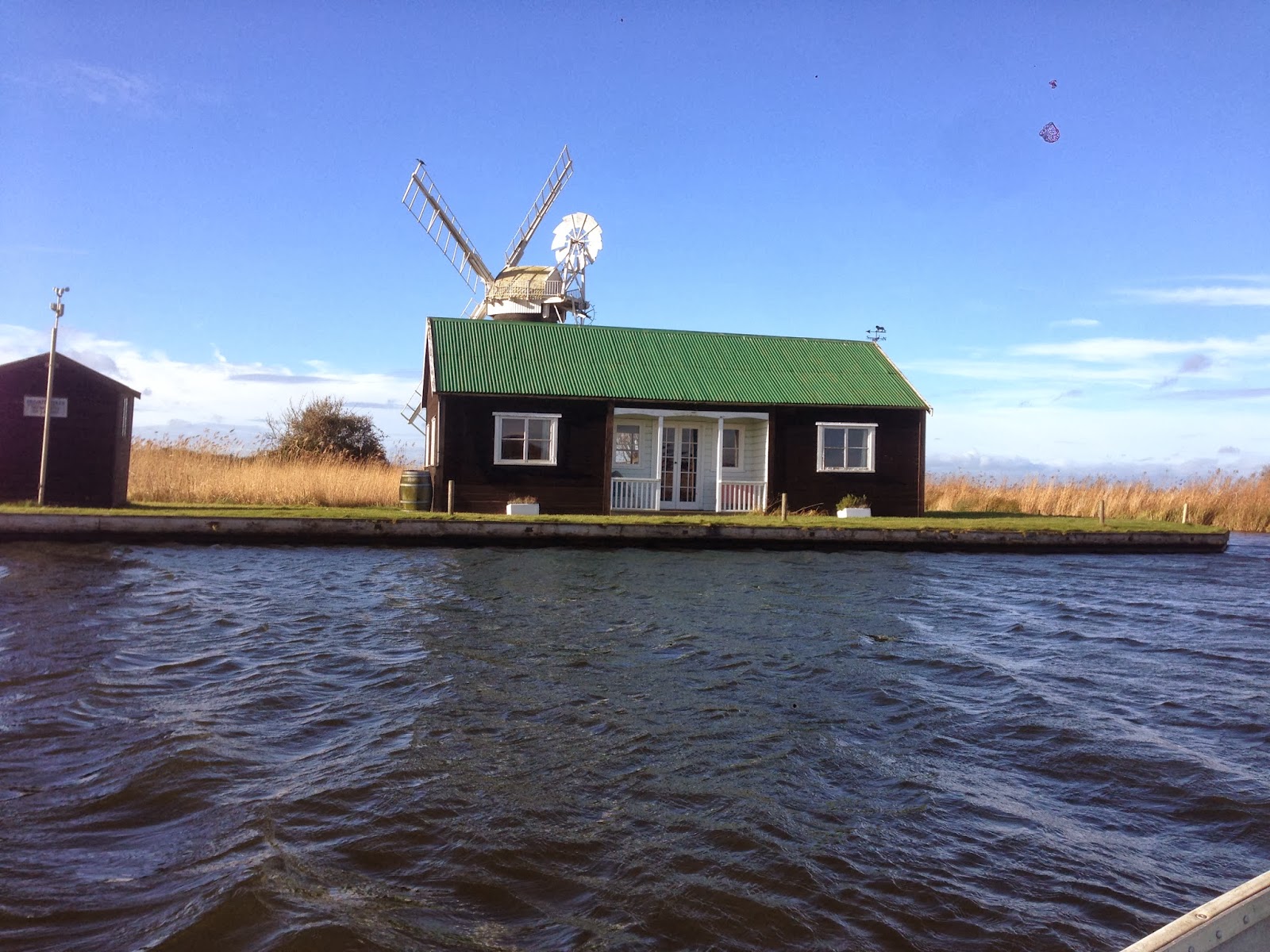