A few weeks back i decided to fish the local park water, me getting down with the kids urban angling hahaaaaa,  for a few hours early one morning as after my trip to the syndicate i thought it would be nice to catch a carp so i,d remember what they were like. 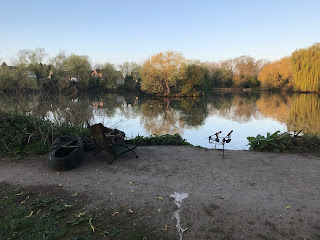 I,m really not a lover of fishing this type of water as there is just too many people around for my liking, but having walked the lake quite a bit with the dogs over the years i thought i,d give it a go. It is a pretty little lake and well kept, just up the road from where i live and has a good head of carp so was an ideal venue to brush off the cobwebs. Also i wanted to try zig fishing and this seemed an ideal place for this technique as i,ve seen carp swimming sub surface on most of my visits.

Having arrived at first light i set up in a swim with easy access to fish a small island in front. One rod to the near margins with a small stick and bottom bait and the other rod out to the margins of the island. Nothing happened for an hour or so until i had a missed run on the margin rod followed by a screaming run on the zig rod. This resulted in a beautifully scaled, although gammy mouthed, mirror carp of around 12lb which initially got tangled in someones snapped off tackle which was still connected to a tree on the island. Eventually after a lot of commotion i landed the fish, quite chuffed i was too as it was the first time i,d used the zig method and i,d caught on it. 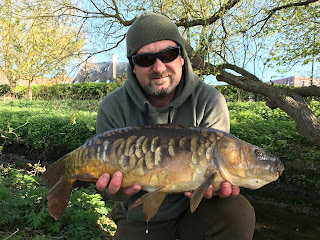 I stayed for another hour but the swim was dead, probably due to the commotion of the mirror i,d just caught. I,d enjoyed my few hours fishing and learnt a bit about fishing a new, to me anyway,  method for carp. I left just as the sun was getting warmer and  the lake was getting busier with more anglers arriving and families out for an early sunday morning walk. 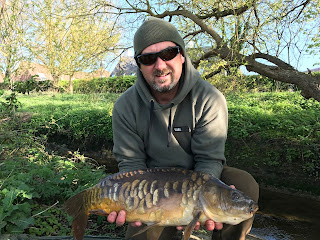 Croissants and coffee picked up on the way home for brekkie, my fishing itch scratched and the rest of the day ahead of me.

Well finally i was given a pass by the better half to have a couple days out from working on the extension and without any hesitation plans were made and bags packed for a 2 night trip to my new syndicate water. The weather was bloody cold when i arrived at first light but after a couple of hours walking part of the banks i opted for a nice tree lined section of bank which was sheltered from the cold wind and considerably warmer than the rest of the 100 acres. Even the sun came out to greet me. 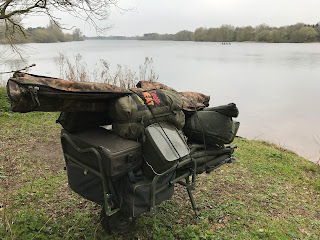 It wasn,t just because it was warmer here, i had also seen quite a lot of small fish activity here when i first walked through the trees. They were only silver fish but seeing as though i had not seen any activity at all anywhere else on the lake i thought this would be as good a place as any. The swim also gave me plenty of water to fish and even more water to scan in case any carp showed themselves anywhere else.

By mid afternoon i had everything set up and three rods fishing in what seemed like a rather featureless expanse of water. I,d markered around as far as i could cast both left, right and central and the bottom seemed to gradually sloped out to 26ft with patches of gravel dotted in between the light weed at varying distances. No areas jumped out 'fish me' so i opted for a near, medium and far approach. Near being a small stick and bottom bait cast 30-50 yards to my left on a gravelly seam i found in 12ft of water. Medium rod was a ronnie rig fished pop-up over a good bed of boilies, whole 10mm and 15mm as well as some chopped, and hemp with a little groundbait mixed in as an additional attractor. And the far rod was a choddie fished pink pop-up launched as far as i could cast, and i moved this rod every few hours in an attempt to locate any fish. All the baits were the ever stinky Virus, boy do these baits stink and the liquids are even worse, in a hope the strong odour would draw any passing fish in. 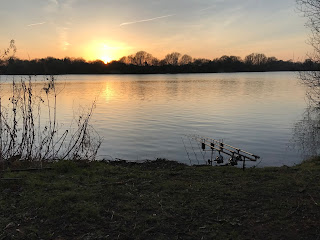 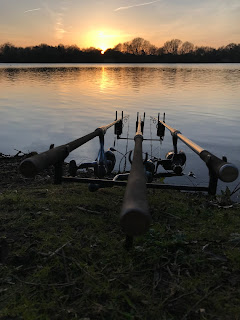 Soon enough the sun started to set with no indication of any carp being in the local vicinity but the water was alive with silver fish and pike thrashing at them. Although i hadn,t caught anything, i did have a few aborted takes but i reckon they were just bream as this water holds a massive head of them, i had still enjoyed my first day there and had learnt a lot about this part of the water. Expectations were high for the night as i settled down to cook a nice fillet steak and mushrooms dinner. 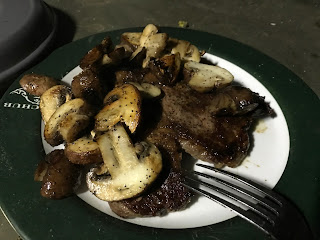 Morning came carpless but i did have a couple bream during the night to the stick mix rod. Not what i was hoping for but at least the bait and rig was working. 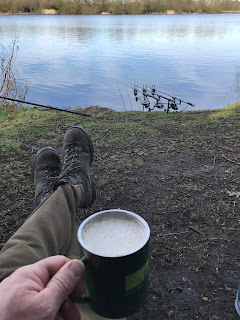 Whilst having my morning latte just after first light i had an erratic take on my medium rod, not a bream type rattle, and before you knew i had rod in hand, ooeerrr missus, and lent into whatever was nibbling at my bait. Unfortunately it wasnt the hoped for carp but a beautiful silver roach glistening in the morning sun as i watched it twisting around in the shallows at my feet. A lovely fish but not what i really wanted and after recasting the same rod was away again but this time a good size 7lb bream was the culprit. In fact the rest of the morning i just got plagued by bream on the medium rod, which on talking to some other anglers the following day, as i walked the banks again, was commonplace if you baited up with particles. Oh well, lesson learned, maybe not a good idea to use particles which is a shame as thats my favourite method really. 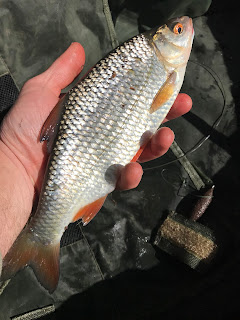 The bream i caught were quite scabby looking things really, with big chunks out of their fins and covered in marks, lumps and scars. Some of them were failed pike attacks i,m sure but i,m not sure about the rest. I would of enjoyed them more if i was using lighter tackle as they were putting up quite a scrap really, and i reckon if i had used a small method feeder approach i would of bagged up on the snotty things, and hopefully some nice tench too as this water holds some crackers as i,ve seen some pictures and actually watched them swim around a a nearby shallow bay a few years ago. In fact this water holds fish of most species to an above average size its just such a big body of water that tracking them down is a bit of a nightmare. I,ve watched match anglers on numerous occasions over the years catch some big old roach upto the magic 3lb mark as well as bream to the upper single figures, with regular reports of mid doubles being caught too. The tench go to low doubles so i,ve been told and i,ve seen them to upper singles swimming the margins. As well as these fish you have good size pike, fair size perch, rumours of biggg eels and abviously the carp that i,m hoping to catch at some point.

The rest of the day was pretty uneventful and the evening and night time didn,t bring any fish at all. The temperature had dropped quite a lot during the later part of the afternoon and the night was a lot colder than the previous. I had considered a move to somewhere else but to be quite honest i was comfortable where i was and had a visit from a regular carper during early evening and he had said i was in as good a place as any. The evening saw me watching the water until well into darkness drinking lots of lattes and eating more jam and cream biscuits than i should off, but i didn,t see anything remotely carpy. 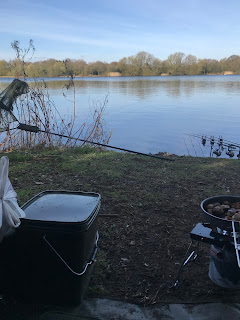 Morning came around and other than a couple of bleeps on the Delks i,d had a good nights kip. I watched the water, drank some lattes, ate a fry up, walked the bank either side of my swim and by midday i was in two minds as whether to stay or go home for a roast dinner with missus. The later got the better of me so i packed up the kit and pushed the barrow back along the track to the truck. A quick stop of at the  waters toilet for a much needed dump and a wash then the local petrol station for a cold drink and then a walk along the bank at the far end before the long drive home. No carp but thoroughly enjoyed myself and  learnt a bit more about this water.

Until next time chaps and chapesses.......