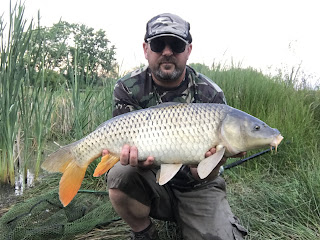 We regularly walk  our dog Paddy over a local country park of a weekend and on our walks there ive noticed theres a lake in the middle of the park. When theres water involved i mhave to explore and upon walking round this small lake i,ve noticed quite a lot of carp activity. On our last visit there it was quite obvious that the carp were very happy to feed on the surface as i saw them bow waving and sipping down insects around the lily pads and marginal reeds. A plan was hatched and later that evening i arrived at the water armed with my stalking rod and a bucket full of mixers and loaf of bread. 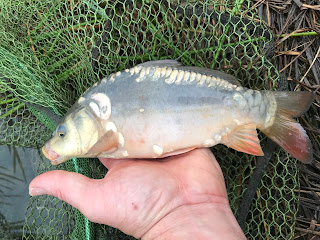 It was a red hot evening with not even a hint of a breeze, perfect for surface fishing but not great for a knackered old fisherman walking the 1.5 mile needed to get to the water. After finally getting my breath back i proceeded to chuck out some mixers and straight away the water erupted with carp of all sizes fighting for the free food. Great thought i, banded mixers on the hook should snag me a shedload, how wrong was i. Although they fed heavily on my free offerings they turned away from my banded baits, so out with the old faithful breadflake and first cast resulted in a lovely common of a couple of pounds, result. Feeding regularly with the mixers and using breadflake on the hook resulted with somewhere in the region of 20-25 carp banked varying in size from a few ounzes to the cracking common at the top of this entry which i reckon went around 18lb, i didn,t have any scales with me. All the carp caught were in cracking condition and the big common put up an immence fight on my 9ft Sonik Stalker road. Not a bad result for a few hours fishing. 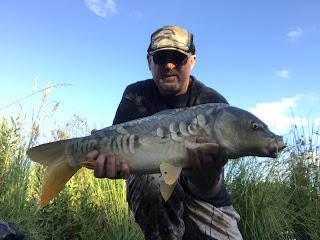 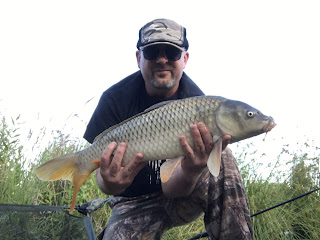 After my previous success the week before i decided to have another go for the carp of the surface. I used to only fish this way when i was a teenager, making my Dad take me to local club waters after work/school to spend the evening stalking carp from various bays, weedy corners and reedbeds. I regularly 'pissed off' the proper carpers by fishing a couple swims up from them and easily catching fish of the top whilst they had been struggling all day with nothing to show for their efforts. More than once i got told to 'fcuk off boy or i,ll chuck you in' as another carp splashed over my net cord. Anyway where was i, oh yes back at the country park lake. Sharon had come with me to walk Paddy so i only had an hour or so to wet a line and as previously the fish were definately interested in my bread. By the time 'Melady' had returned i,d netted over half a dozen carp topped by the two fish shown, both around the 8lb mark i reckon. You can,t complain about fishing like that on a free lake deep in the middle of a beautiful country park. I,ll give the place a proper go with bottom baits in the larger part of the lake at some point as talking to a guy who says he fishes it quite a bit, theres carp just into the twenties living in there. Its got to be worth a go.
Posted by BRYANS ANGLE at 24.6.18 No comments: 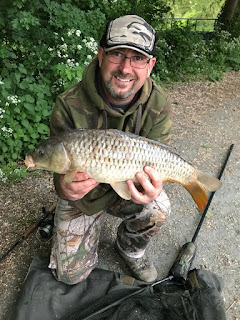 So after coming back from my French trip i havn,t exactly had a lot of spare time to get the rods out, so the thinking cap was donned to see how i could get a couple hours dangling in so that i could scratch that nagging angling itch.

After finishing work a little earlier than planned i couldn't take it anymore and grabbed a little bit of kit and two of my 9ft stalking rods and took a walk to the local park lake. I,ve fished here a couple of times over the past few years but with its location by a main road being noisy and the fact you get some right old 'Roughuns' wandering the banks sometimes, its not exactly my ideal water. Anyway ignoring the negatives and focusing on the positives, lots of hungry carp,  i opted to give it the evening. 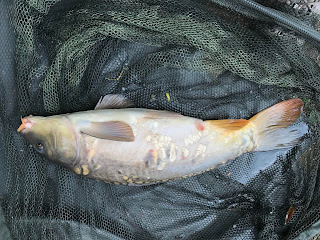 Fishing small pva bags full of pellets or stick mix i cast regularly to the ends of the near margin trees in search of a bite. You could see the carp rolling and patrolling these areas regularly so it made sense to fish in close rather than launch to the island or middle of the lake. As soon as the rods were in the rests the bobbins were twitching as hungry fish fed on the free offerings. This water also holds a good head of tench and apparently some big roach, also some BIG eels if the rumours are true. It didn,t take too long before a full blooded run happened and after a spirited fight, it took me into the trees a couple of times, a nice mirror of about five pounds or so was on the mat.

Because of the previous disturbance i decided to move swims and after half hour, i guess, i was into another mirror of similar size. They don,t half scrap on my 9ft rods, great stuff. Another move and Sharon paid me a visit as she got of the train from work, followed shortly by a fighting fit common of about 4lb. Over the next hour i had another few takes but didn,t connect and managed another small mirror before calling it a night and heading home via the kebab shop.

Its not my favourite kind of water to fish but its worth wetting a line every now and then as its good for a fish or two, all be it small ones. There is fish into twenties apparently but i can guess you have to wade through the smaller ones to get a larger specimen. I will return at some point.
Posted by BRYANS ANGLE at 24.6.18 No comments: