Earlier in the year, Easter weekend to be precise, myself and 'she who must be obeyed' dropped in on a large body of water with the intentions of having a nice leisurely stroll along the banks with our two pooches. I,ve heard of the place on and off over the years but never actually got round to visiting the place. Rumours have it there were some good sized pike swimming around beneath this inland sea and seeing as pike are my favourite species it was on the bucket list but the place kept falling out of the memory banks.

Well after months of research, finding out not a lot about the fishing on this 350 acre beast in the process, i bit the bullet and handed over my hard earned for a years permission to fish this behemoth. My research had pulled up a few details and pictures of average sized carp and pike that have been caught over the years, as well as a few blog posts about the good tench fishing and the large roach to be had. Nothing particularly exciting i will admit but you have to understand that this is a huge body of water to find your quarry in with depths ranging from a couple of feet to nearly 50. As i mentioned the stocks of fish present weren't what was exciting me but the surroundings around where they live. The place is a wildlife paradise, it must be 75 percent tree lined with plenty of small bays and numerous other features dotted around its banks. Theres also plenty of areas designated as wildlife sanctuary which just teem with various flora and fauna. 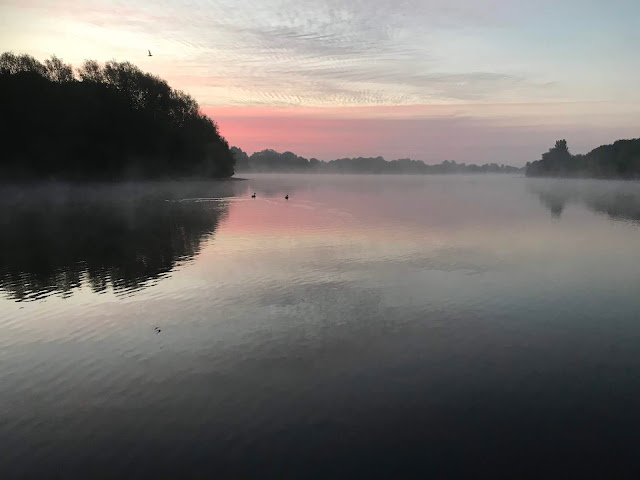 Well at the beginning of october i finally arrived at my chosen swim for a weekends fishing targeting the mythical carp that live there. Overnight temps were down to low single figures but day time temps were in the low twenties, very odd for October. After watching the water for a couple of hours i set about finding three sexy looking spots to place my rigs and hopefully snag me a mudsucker. Over the course of the first day nothing happened except the odd single bleep on the alarm possibly caused by one of the squillions of silver fish that were topping all around me. The sun started to set so after a big boy lump of sirloin steak i settled in for the night hoping that i might be rudely woken by a screaming alarm. Well would you believe that is exactly what happened about 10.30, i was away with the fairies when my left hand bait was snaffled by a carp. i know it was a carp as after i picked up the rod it hooped over and whatever was on the other end started to take line, theres only 2 fish in this water that could run like that and it definitely wasnt a pike. Standing in the dark with my knees knocking and my heart pounding, i could,t believe  that i was attached to a carp on only my first attempt targeting them. Then horrors of horrors, the line went slack. I could,t believe it, from riding up high i was now stumbling all low, my price had spat the hook out.

The next day passed quickly and quietly without anything interesting bar a visit from another member i had previously been speaking too who popped in to say hello. Upset about losing a fish but happy to have hooked one i packed up early afternoon and set off for home.
Posted by BRYANS ANGLE at 12.11.18 2 comments: