Lately there have been a few reports of the thornback rays showing up in the local tidal river in good numbers so I thought i,d set out to catch one. I have caught a few thornies in the past but I,m far from proficient at it, so I,ve set myself a little goal of fishing for them more over the next couple of months so that I can learn as much about them for future fishing trips. They're actually not too difficult a species to catch as they're not really rig shy and as long as a nice fresh bait is placed in front of them then you,re in with a chance. Anyways I arrived at my chosen location, after a 2 mile grueller of a walk, an hour before low water planning to fish the tide up until it was pulling too hard, making the fishing uncomfortable.

As the picture shows the water here is a long way down which makes retrieving your tackle, or fish for that matter, a tricky affair. But its worth sliding down the wall and clambering over the rocks when needed as this spot is straight into deep water. Baited with a chunk of bluey the first rod was launched to the horizon, ok ok maybe more of 75 yard lob if I,m being honest. Before I even had time to bait up the second rod the first showed a classic ray bite, a pull down followed by a little tap and then a big slack line. I quickly wound the slack in until I felt some tension then leant into whatever was on the other end of my line not really expecting to have a fish attached. Low and behold I felt something kick back so proceeded to 'play' what turned out to be a small male thornback to the base of the rocks. I was really happy with this quick capture, even though I got in a right 'mucking fuddle' slipping, tripping and stumbling down the sea defences and across the rocks to land this more than welcome fish. Safely unhooked and returned none the worse for wear the ray swam off strongly and I set about baiting and recasting the rod before doing the same with my second rod.

Just as I sat my arse down the first rod started to nod as another fish took a liking to my bluey chunks. Same as before, pick rod up, wind in slack line, feel resistance and lean into whatever was causing it. Thump thump and another ray was pulling on the other end of my line, actually it was pulling pretty hard considering there was no tide run. A few minutes later and a similar sized ray to the first was unhooked and sent back to its watery home, what a result 2 fish in 2 casts. Another half hour or so passed and the second rod showed signs of something taking an interest in the squid and herring cocktail I had chucked out for them. A few minutes later and another small male thornback was drifting off back to the depths.

After that initial flurry of action it went quiet for an hour or so, which I was actually happy about as it gave me a chance to get my breath back after that long walk and then clambering up and down the rocks. It wasn,t too long before I had another couple knocks on the rod tips but nothing materialised until whilst casting I noticed the remaining rod tip tap a couple of times. By the time I had tightened up the cast rod the other one was bent double and balancing on the rod rest with the butt of the ground. Tightening down I could feel a much heavier weight on the end of the line compared to the previous fish and I proceeded to pump the fish to the shore which was made harder due to the wind had picked up as well as the tide and started to run harder. A couple of minutes later, after a few hair raising moments where the ray got snagged in the rocks, I landed a lovely female thornback or around 6lb. Again I carefully unhooked here and slid her back into the river. Top banana........
Shortly after returning the female I packed up and made the long walk back to the van as I was a happy bunny and didn't feel the need to carry on fishing. I think  I fished for the total of 3.5 - 4 hours and caught 3 small males and 1 female thornback and also had a few other knocks. I will probably have another try for them next week if I get the time.
If you like the countryside and outdoor life take a look HERE at my other blog.......
essex sea fishing river crouch sea fishing skate thornback rays

Popular posts from this blog 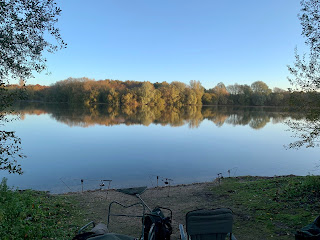 So last Wednesday I finally got my wish and loaded the van and headed to the big water for a day chasing 'Old Esox'. Weather was forecast to be sunny, cold and very little wind, which is not my favourite conditions to be fishing in, but 'sod it' said I, I'm still going. Arriving at first light I could just see that the area of lake I had chosen was teeming with silverfish dimpling all over the place. Especially along a line about 50yds out from the banks, I believe this is probably where the marginal weed thins out, not that there is much around at this time of year. Barrow loaded and off I went to find the first swim along the bank that I had chosen, one which I have not fished before. I've fished the opposite bank a fair bit but haven't done so on this side, all I have done is have a little lead around, a couple of years ago, just to get a feel for the topography of the bottom, it doesn't vary much until you get further up the bank but more of that la
Read more 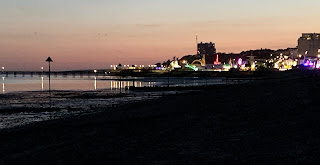 Recently there has been reports of a lot of smoothound being caught from the Thames shores, especially locally to me at Southend on Sea and Canvey Island. This news gained my interest as i used to love catching smoothounds on the monthly boat fishing trips to Hayling Island that i used to take with the guys from a local boat fishing club i was a member of. The power and speed of this members of the shark family was awesome from the boat so catching one from the shore would be fantastic. After doing my homework i opted to fish the closer of the recommended venues, Southend on Sea. I used to fish of the platforms near the casino many years ago and enjoyed some good sport catching winter species and flatfish as Spring arrived, but i,ve not fished the opposite side of the pier before let alone during the summer. I decided to choose a night time time, 1.30am to be precise, as i didn't really fancy being surrounded by the daytrip brigade. I arrived just as it was getting dark and wal
Read more

BRYANS ANGLE
ROCHFORD, United Kingdom
I'm just a guy with a passion for all forms of angling.