CARP OFF THE TOP

Yesterday one off my fishing clubs opened up their gates again after a months closure. Considering it had been a sunny day and i was really in need of a bit of fishing R&R I grabbed some kit and popped over to my local club water no more than a mile from where i live. As was expected it was pretty rammed with anglers, well carpers actually, but i didn,t mind as i was going surface fishing for some of the carp population in some sneeky out of the way swims that never see a boilie, pellet or hair rig. 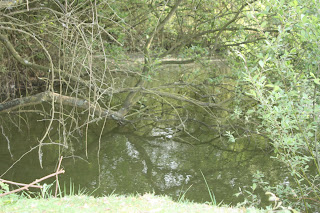 My first couple of swims saw a couple of carp slowly rise to my oiled floating trout pellets but not actually taking them with any gusto. So i set of around the complex taking note of any likely looking areas for future trips. This complex has 8 gravel pits to choose from 3 around 3/4 acres and the remaining 5 are only small, small enough to cast a float across.
By about 6.30pm i had located a swim on pit 5 which had a fair few carp readily taking my pellets so i sat myself down and got ready for some action. 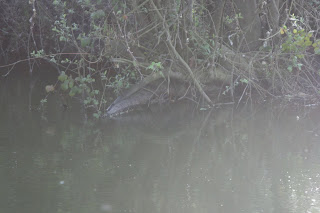 The swim itself had a line of reeds cutting it off from the rest of the pit so no one could really see me and it definately wasn,t favour with the carp boys, who seemed to have the biggest bivvies known man.
After 5 mins of feeding i made my first cast tight to the reeds and within 60 seconds a big pair of lips appeared and slurped down my artificial dog biscuit. A quick strike and i was attached to a turbo charged carp which ran me around the swim. As i was playing this carp there were still more carp taking my free offerings so i flipped out a few more. 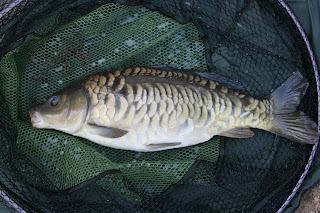 After a couple of minutes i banked my prize of a cracking near fully scaled mirror of roughly 6lb. I then followed him up with a scrapper of a common which went around the 4lb mark. Fish were still taking my floating trout pellets so i carried on fishing for them. Usually I catch one, sometimes two carp from the same area then leave the swim alone for a while, but this time they were still feeding strong so i made hay while the sun shone. After losing a couple of fish due to me being a bit heavy handed i hooked into something a lot stronger which gave me a good tussle 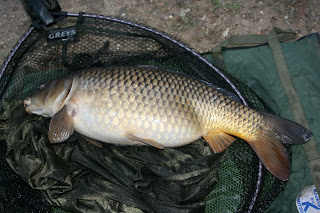 for a few minutes before i slipped a net under a beautiful plump 11lb common carp. Not big I know but great fun none the less.
I moved off to another swim after this and lost another couple of fish due to me having to bully them away from the snags but i don,t mind as they were lost due to hook pulls not snap offs.
For those interested my tackle consisted of my ET Sneaker rod, 10ft 4 piece, a Shimano 6000re loaded with 8lb Korda floater line, a size 8 raptor hook (I think) and a piece of artificial dog biscuit made by Enterprise Tackle. All simple stuff but all i need for this kind of fishing. 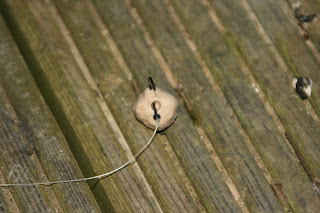 I thoroughly enjoyed my couple of hours fishing, travelling light and walking around is great fun. Also its quite enjoyable watching the carp boys faces when i winkle out a carp from the overgrown swim next to them as they stand their glaring at me.....
Posted by BRYANS ANGLE at 2.5.11 No comments: