Last week i actually had a whole 7 days of off work and took the other half on holiday to Devon. We started of spending the first night in Dartmouth, a favourite place of mine as its absolutely beautiful as you stand on the quayside and look across the river to the opposite bank. 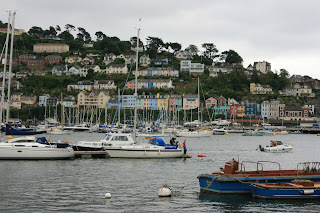 After our night in Dartmouth we went of to spend a few days with my family in Torquay as my sister was getting married there. All went well with the wedding and after a few days with the family we moved on to spend a couple of days staying in Longleat, where we visited the safari park and generally chilled out. 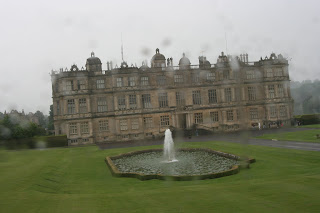 Whilst in Devon i just happened to find a rod, reel and bag of tackle stashed away in the car, so what was i supposed to do other than grab said gear and head down to Brixham breakwater with my Dad and have a wee dabble for the day. It was roasting hot as we set up stall half way along the breakwater, tying feathers to our rods we hoped to bag some mackeral. We both only had lightweight spinning rods so the feathers were cut down to 2 instead of 5 and started top launch them as far as we could. A few mackies were being caught further along from us but we struggled. I did manage to hook one but it fell off just as i was lifting it out of the water, they scrap like demons on light gear.

Having had enough of constant casting after a couple of hours i decided to set up a float rig and try for some wrasse on the inside of the harbour. Tackle was a large float carrying 4 aaa and a size 10 carp hook with a 10lb hook link. Straight away i started to gets tugs on my ragworm but couldn,t connect so i used a smaller piece of worm and finally banked a whopper. 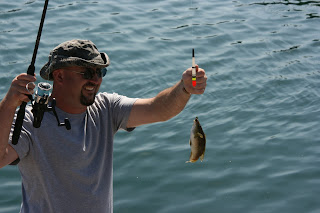 Ok so it wasn,t a monster but it did put up a good fight. After this first wrasse i just kept on catching them, all around the same size except for one slightly larger specimen which really did give me the run around even snagging me under a rock at one stage. 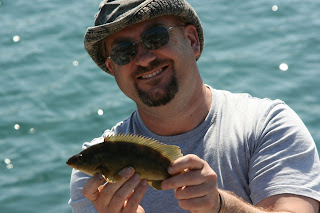 I also managed a right odd looking goby/blenny type thingy which i keep meaning to look up in a book to see what it actually is but keep forgetting. 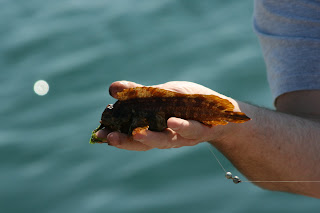 after a few hours of this floatfishing fun i,d lost count of how many wrasse i.d caught and i,d lost double that amount as well. It was great bit of holiday fishing and i,d forgotten how enjoyable it is to catch these min sea fish. Shame you do,nt get them around the shores of Essex.
Posted by BRYANS ANGLE at 2.8.11 No comments: