ATTACK OF THE WHITING...

Suday just gone i ventured out to my local estuary with aims of catching a flatfish or two. I was hoping for a nice plump dab as the area i chose is reputed to throw some nice ones up this time of year, or even a nice flounder would of made my day. Baits were fresh lugworm, mackeral strip and slivers of squid, all cast at varying distances. 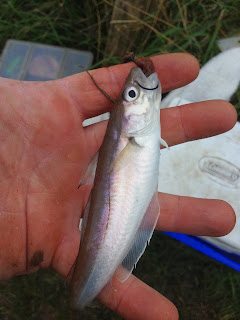 Unfortunately all i managed to catch was 10 of these little blighters which were giving me rod rattles from the off. I,m not going to complain though as i enjoyed my few hours sitting out in the dark watching the tips of my rods silouhetted against the skyline.

The sunday before last saw me whizzing along the A12 racing the rising sun to get to the swim i fancied on my syndicate water. There was other swims on this large body of water that were probably just as good as the one i wanted but i had made my mind up as to where i wanted to go. Arriving in the car park there was only the one cart there so with a 'haste in my pace' i shot off to check if my swim was free. Fortunately it was so i went back to my van and proceeded to load the barrow with all the kit needed for a days piking as well as the bait boat, damn that things heavy with the batteries etc. By 7am i had 3 rods set up and fishing but unfortunately i,d not checked the batteries on the boat hand set, which were flat, so had to settle with casting. There was fish topping and jumping all over my swim at around 30 yds so i dropped 2 baits there and launched the other as far as i could manage. 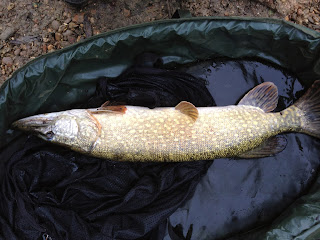 At 8am i had a run on the distance rod which after a cracking scrap resulted in this bruiser pike of 10lb 13oz. I didn,t take a proper picture as i didn,t wan to alert the guys getting their boats ready that i,d caught one, or else they would of been straight over. 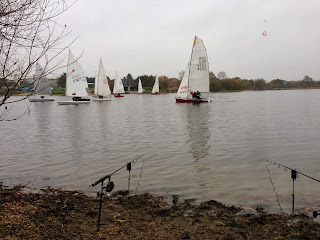 Around 10am the dreaded sail boats started to launch and did their usual and made a bee line straight for me. Why they have to come so close to the bank where they can easily see someone fishing is beyond me. One was so close his keel clipped my line. Bloody annoying it was and by midday i,d had enough and moved to another area of the lake. 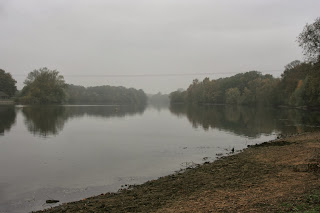 I spent the rest of the afternoon fishing this area but unfortunately i didn,t even get a nibble. I,d popped into a local garage and bought some batteries for the boat handset so spent some time mapping out the contours of the swim and it was very suprising, mostly uniform then i found an are where it dropped from 26ft to 37ft within a few feet. Obviously i had a bait here but it didn,t work, but i,ve noted the area for next time. 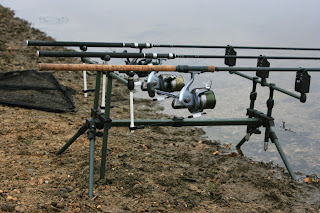 I did get to try out my midifyed road pod and i was very happy how it worked too. Some of the banks here are either hard as nails due to the gravel or are so soft that any bank sticks that you push in just fall over. This pod with my drop off adaptions solve both problems, although its now another peice of kit to lug up and down the banks.