Recently i have been drawn towards having a bash at catching some lovely Essex flounders like i used to many years ago. I actually havn,t caught, or fished for, flounder for a good 10 years now. In fact probably the last time i caught one would of been when i used to fish the platforms near Westcliff Leisure Center for anything that would take my bait. I used to love fishing tides that would be at their highest around 9pm, during the winter this was, and would use light gear and cast to the moored boats and end of the groins and would have great fun catching pouting, whiting, flounder, dabs, small bass and sometimes even rockling. My other half at the time thought i was mad as i would go out in all sorts of weather, i loved it that much.

Anyway due to reminiscing about my past fishing exploits i decided that i needed to scratch this itch and early one morning last week saw me and Oscar The Wonder Dog walking along the pathway at the bottom of the sea defences at a mark on Canvey Island, one i have never really fished to tell the truth but i,d been advised to give it a go by a few friends on one of the fishing forums, in hope of connecting with a couple of plump flounders. A nice are was found within casting distance of the main channel and after setting up my rod out flew a 2 hook flapper rig baited with frozen lugworm. 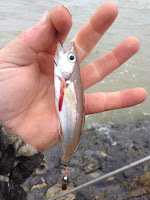 Everything was quite until around an hour before high tide when i started to get a few little rattles on my rod tip. After striking into thin air i eventually reeled in this tiny little pin whiting which i didn,t even realise was hanging onto my hook. A few more little rattles resulted in me again not hooking into anything, so i decided to leave the next rattle to materialise a little longer in the hope that the rattles were possibly being caused by flounder nipping and tugging at the end of the worm. 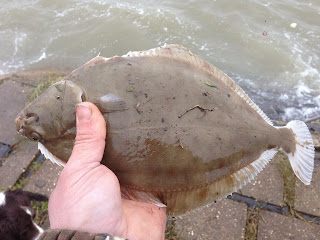 A few rattles stared after i re-freshed my bait but i sat on my hands. A few more rattles followed by a nice pull down on the rod tip had me jump up and position myself with the rod tucked under my arm and nice bit of tension on the tip. Again a few more little rattles were seen on the tip but more importantly felt through the rod, i was using braid mainline and my pike rods, then a nice thump followed by a good pull and instinctively i pulled into whatever was pulling at the other end. Excitedly i felt so weight at the other end and preceded to bring in something which was pulling back. As the fish got 10 foot or so from the bank it started to actually fight back which was great as its been years since i,ve actually had a sea fish fight back. In next to no time this gorgeous plump flounder surfaced and was soon on dry land. I was over the moon as my target had been achieved. Quickly unhooked, a few pictures taken with my phone and away she went back to her watery home. Bloody fantastic.....

Nothing much materialised after the flounder but it might have been because a seal popped its up and watched Oscar run around for a bit. But to be honest i wasn,t that bothered as i was made up with flounder i had caught, now i can,t wait to have another go for them. 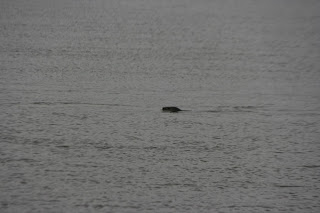 A couple of weeks back i took my dogs for their usual long weekend walk along Benfleet Creek as a change to our local haunt of South Fambridge. I guess i should of checked my tide app as when we got there it was at dead low water so there basically wasn,t any water for Harry to have a swim. It was a shame as he does love the water, and sometimes i have a right job to get him out of it when we have to go. Unfortunately Oscar doesn,t like to swim, he can swim but just chooses not too. He,s happy just running around splatting in the mud and searching through the scrub grass. 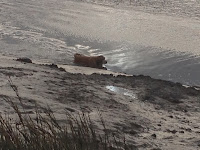 Anyway, as we were walking along the creek i was taking note of the gully left behind by the receded tide. In places it came within 10 yards of the bank where i was, and also in a couple of places the water was a foot or so deeper than the average. I know this as Harry was wading through the remaining water and i was keeping an eye on how far up his legs/belly the water was. 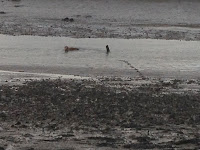 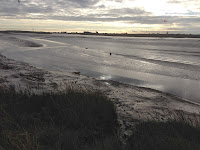 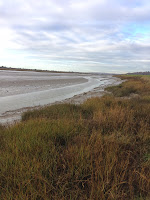 Seeing all this mud and the deep gully running through it made me think of years gone by when i used to do a bit of flounder fishing in this creek. I didn,t often fish the area i was walking, but fished opposite on the Canvey side around the speed boat area as well a from the wharfe in Old Leigh. The most productive area was from the wharfe in Leigh, i used to sit on the bench and just flick my light leads into the gully and let it gently roll with the tide until it came to a rest and more often than not a rattle on the rod tip would soon appear. I caught some cracking flounder
that way and still use the technique now where ever i might be sea fishing.
My biggest flounder came to this technique and also at Old Leigh after i had 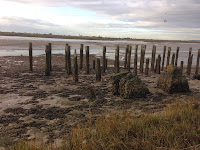 gone pike fishing during the afternoon but had found the lakes to be frozen so without a second thought i shot over to the wharfe and fished strips of mackeral to try and tempt a flattie. I ended up after a couple of hours fishing with 4 flounder over 1.5lb and the biggest over 2lb. Great fun as i only used to have 2lb tc carp rods which i used for my piking so when a flounder was hooked it fought really well on these light rods. 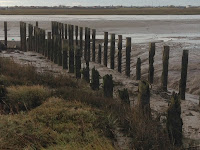 I took a picture of these old timbers as a friend of mine told me that these were the remains of the bridge legs that used to span the creek for the train to go over. I don,t know how many years ago this was, it was a lot though i,m sure. They are still as strong as ever and you wouldn,t be able to break them if you tried
Posted by BRYANS ANGLE at 21.12.13 No comments:

Last week i knicked the morning of work as i fancied spending a few hours after the perch at a small local pond which i,ve been told holds a few biggies within its shallow waters. Weather was perfect, overcast with a slight breeze, as i set up in the last swim to the left of this tiny water. One rod was set up with a ledgered lobworm cast to some reeds where i had seen a big perch lunge at my lure last year. While my other rod was to be floatfished to the right in front of some more reeds with the hope of some silvers that i could use as bait, as well as causing some activity in the hope that this might draw in a couple of perch. 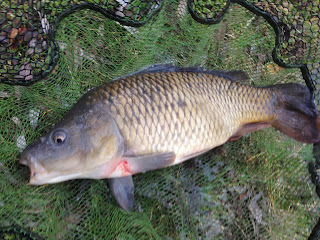 Unfortunately the perch didn,t materialise, but i did have an enjoyable mornings fishing catching some gorgeous roach to three quarters of a pound along with a couple of bream to 3lb and 5 carp to around 4lb or so. All the fish were caught on a single floatfished maggot on a size 18 hook to 1.8lb hooklink attached to 3lb mainline. 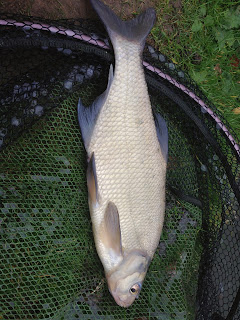 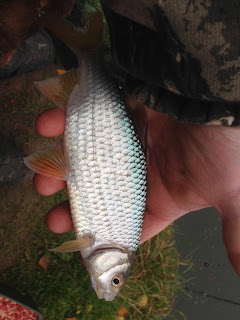 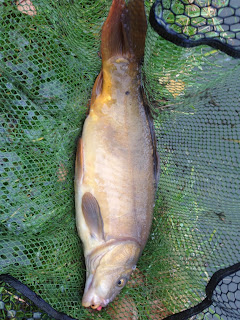 I managed an afternoon after the perch on a local venue 2 weeks ago as i was ' itchin to go a fishin'. The weather wasn,t the best for perch fishing as the sun was strong with only a slight breeze to ruffle the waters surface. First task was to catch a handful of silvers to use as bait, my favourite technique being free roaming a small roach beneath a 1 swan shot loafer incorporating a 9 inch wire trace with a small semi barbed treble hook attached at the end. This set up has accounted for a lot of good perch upto 3lb 14oz as well as pike to upper doubles. 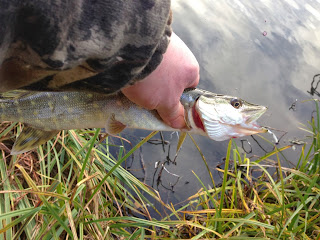 As per usual a couple of micro pike snaffled my livies and put up turbo charged fights on my light gear, but they soon paid a short visit to the bank. 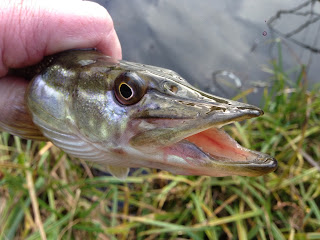 The speed of these small pike is quite amazing. I could see their every twist and turn through the clear water as i was wearing that most vital item of fishing kit, polarised glasses. Small they may of been but they still had some impressive chompers.... 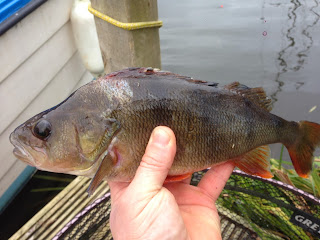 After a couple of moves i managed my first perch of 1-1.5lb. That was soon followed by a couple of perch around the half pound mark before i set off to fish an area 100 yards away.

I had another couple of small perch before the sun started to set and i left for home and my dinner. I did see a very good size perch chase some fry from beneath a boat which was a nice sight to see.


All in all a nice way to spend an afternoon even if i didn,t connect with one of the biggies that live in this stretch.
Posted by BRYANS ANGLE at 9.12.13 No comments: