Its been quite a while since i last posted as i have been exceptionally busy re-locating my warehouse closer to home and also building myself a new all singing all dancing office. This upheaval has cost me lots of fishing time, not to mention lots of money, but it does mean that my travelling time to and from the warehouse has been reduced  by 75% and also gives me a significantly smaller weekly diesel bill. All this means that i can now run my online FISHING TACKLE business more efficently, which also means i,ll have more time to go fishing. Wooohhooooo......

I did actually manage a few days fishing a couple of weeks ago as the other half had to go to Southampton on a training course for a few days and i tagged along to keep her company of an evening. Now obviously i would be free to spend the days doing whatever i fancied so after a little research and a few questions on certain Facebook pages i decided that i would have a little bash at fishing the Lower River Itchen for whatever may come along. A couple of location were written down, tackle was dragged out of storage, and local tackle shop addresses were found.

Well my first day after picking up some decidedly dodgy looking red maggots, more casters than maggots though, i drove the short distance from where we were staying to a stretch of the Itchen that had been recommended to me. It had been pissing down all night and was still drizzling heavy when i arrived at my destination and i was in 2 minds as to whether i should just turn around and go back to the hotel, but a quick scan of the river bank showed a few people braving the wet stuff, so i donned a jacket and took a walk. The river itself was narrow with overhanging trees and bushes on the far bank and looked lovely considering how close it was to civilization. The river was pushing through hard with quite a bit of colour which instantly put me of fishing as i thought it was not worth getting wet, but after speaking with a chap who fishes there regularly he informed me that it was in perfect condition and should fish really well. I took a walk along the banks and through a lovely park area before walking back again and having a chat with another angler who was trotting a float down the middle after whatever comes along. In the 10 minutes i stood chatting with him he caught 2 nice sea trout and a lovely grayling which were both first for me as i ahd never seen either in the flesh before. After a few tips from this chap i shot back to the van and collected my gear before taking the walk to an area i had found that i liked on my recce.

I fished a couple of areas without so much as a nibble, which i didn,t mind as i,ve not long trotted before and it gave me some time to practice. before setting up on a lovely s bend in the river. I liked the look of this spot as you could see where the near margin was shallow to half way across the river then sloped into some good deep water. It had to hold fish i thought. 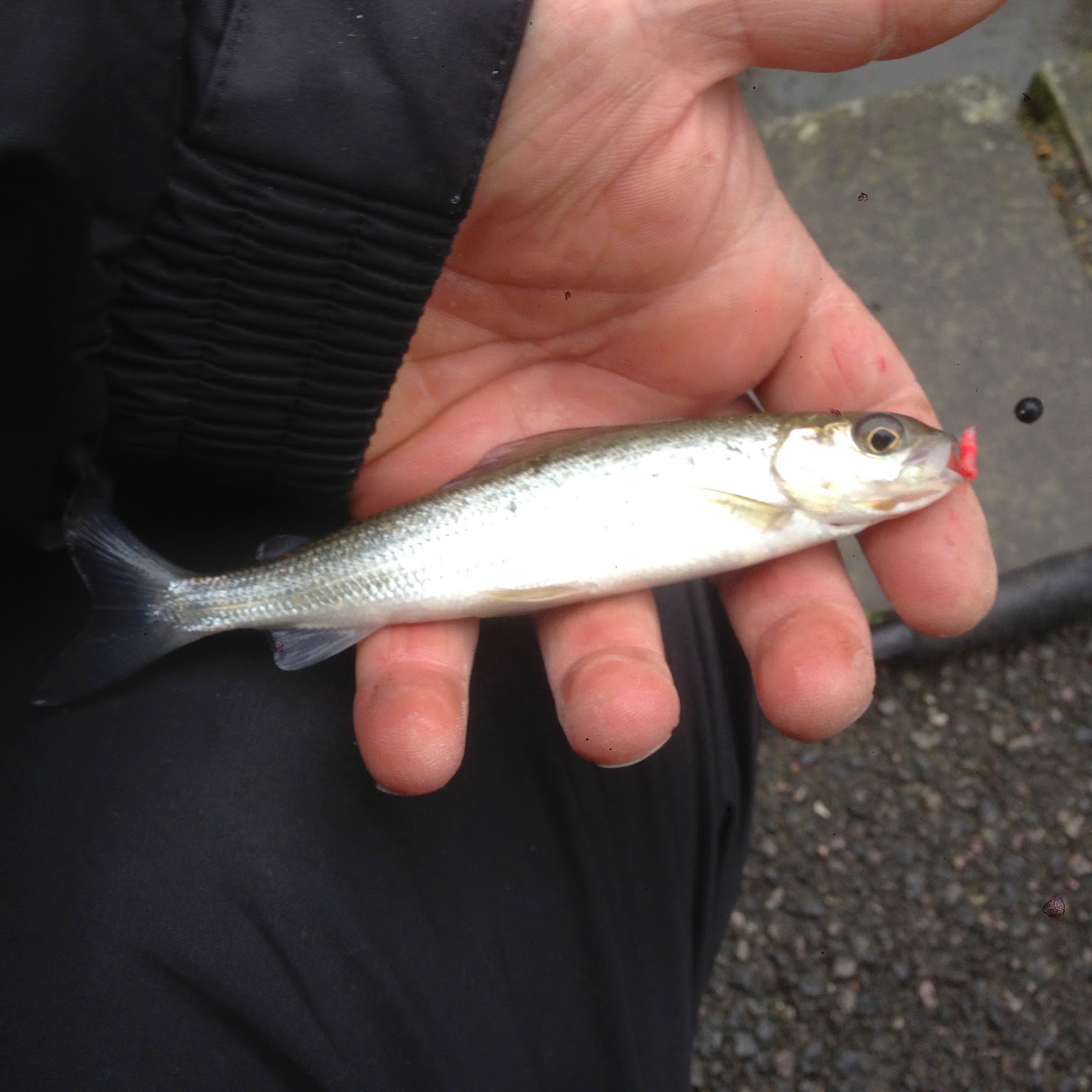 After a good half hour i was starting to lose my confidence in catching anything and as a gamble i shallowed up a little and cast to a slightly different part of the river where the flow showed a defined 'crease'. First trot down and i hooked this little blighter, which although small really made my day as it was a first for the river and a first for me long trotting. 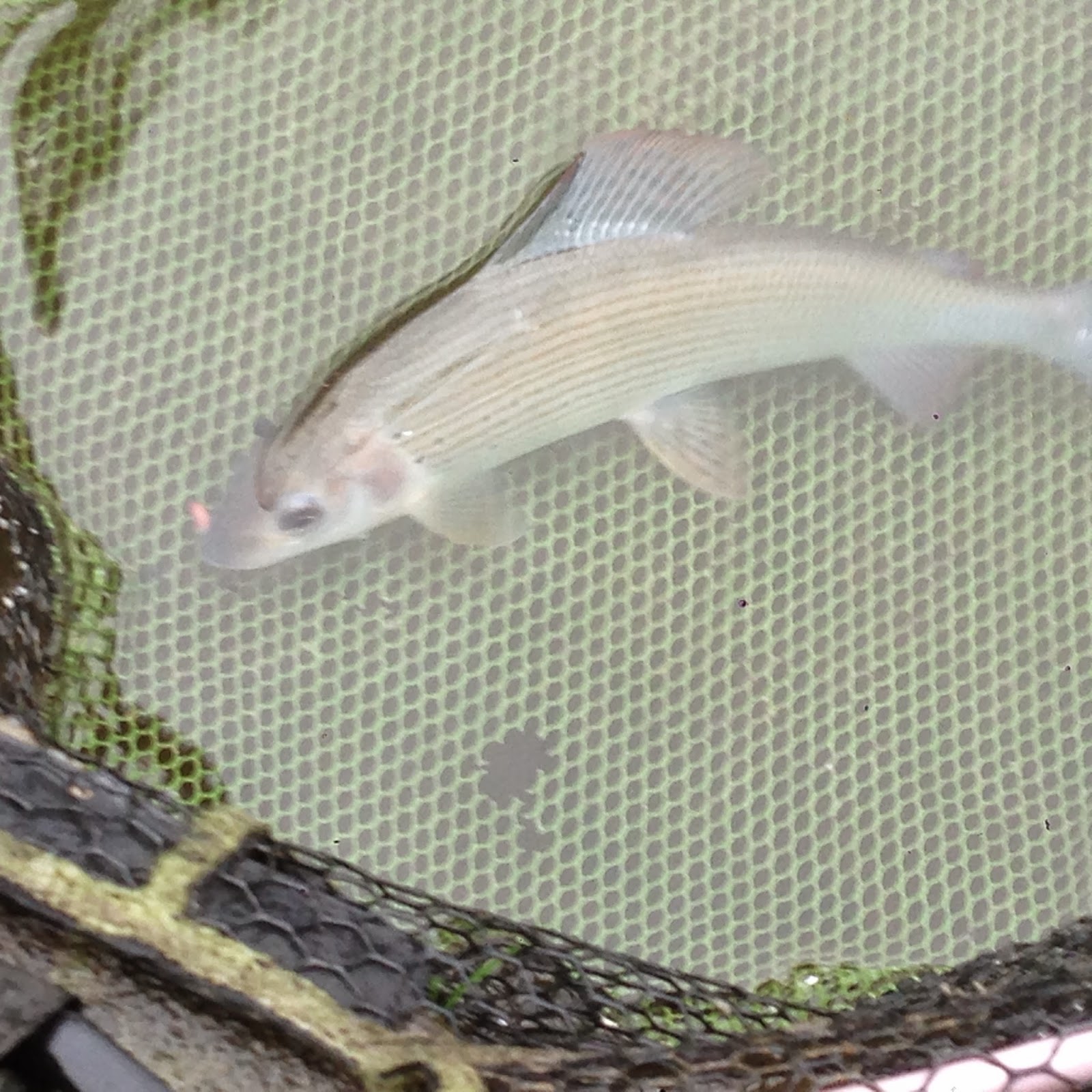 A couple more casts to the same area and i hooked and landed my first grayling, only a small one but i was over the moon with this capture. Unfortunately as i was a bit excited i slid it back without taking a picture, what a plonker i thought as i,ll probably not catch another  now and won,t have a photo to remind me. No need to worry as the next trot down this little cracker, of about three quarters of a pound i guess, took my double red maggot hookbait and gave me a right tussle trying to land it in the strong flow. I was so happy i had to text a couple fo mates to let them know. Even though it wasn,t the biggest it was perfectly formed and beautiful. I managed a couple more small grayling over the next hour but they both threw the hook near the net as they thrashed around, but i didn,t mind as i,d caught 2 and on a new river and new method. 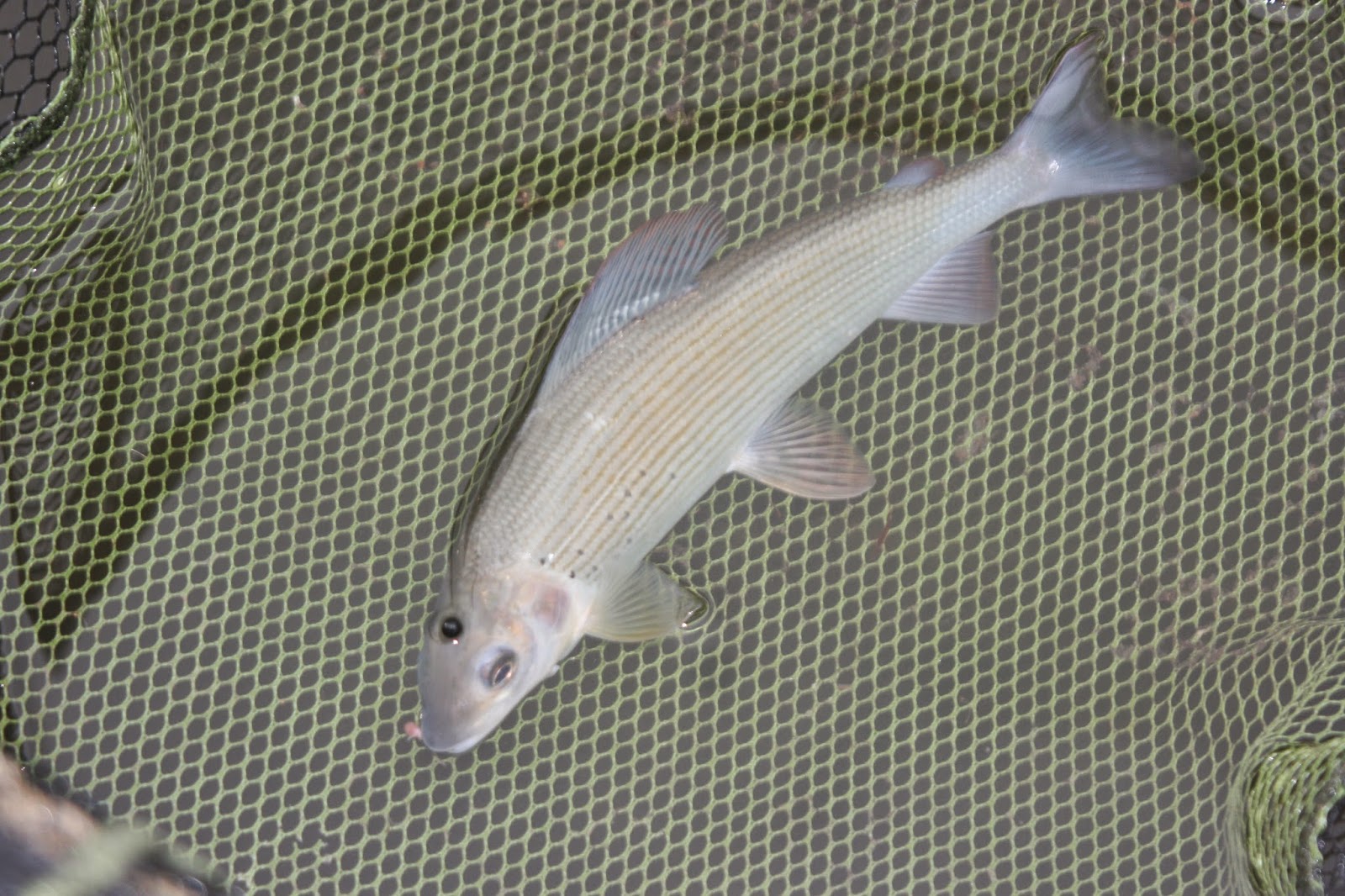 The next day i was back at the same stretch of river in the hope of more grayling, but this time i fished a different spot beneath a bridge. After a couple of hours i hadn,t even had a sniff on my double red maggots and i couldn,t seem to get the trot right and i was getting a little frustrated. A move 15ft further along the bank and i was now a lot happier with the way the float was running down and it was also travelling over the area i wanted to fish. After another half hour of chucking in a dozen maggots, cast after 5 seconds, trot for 30 yards, reel in and then repeat, i finally had a bite but missed it. Next trot down, and with my confidence buoyed by the previous trot, right in the spot of the earlier bite my float shot under and i hooked into what felt like a good fish. After a few minutes and a couple of hairy moments i landed another cracking grayling. 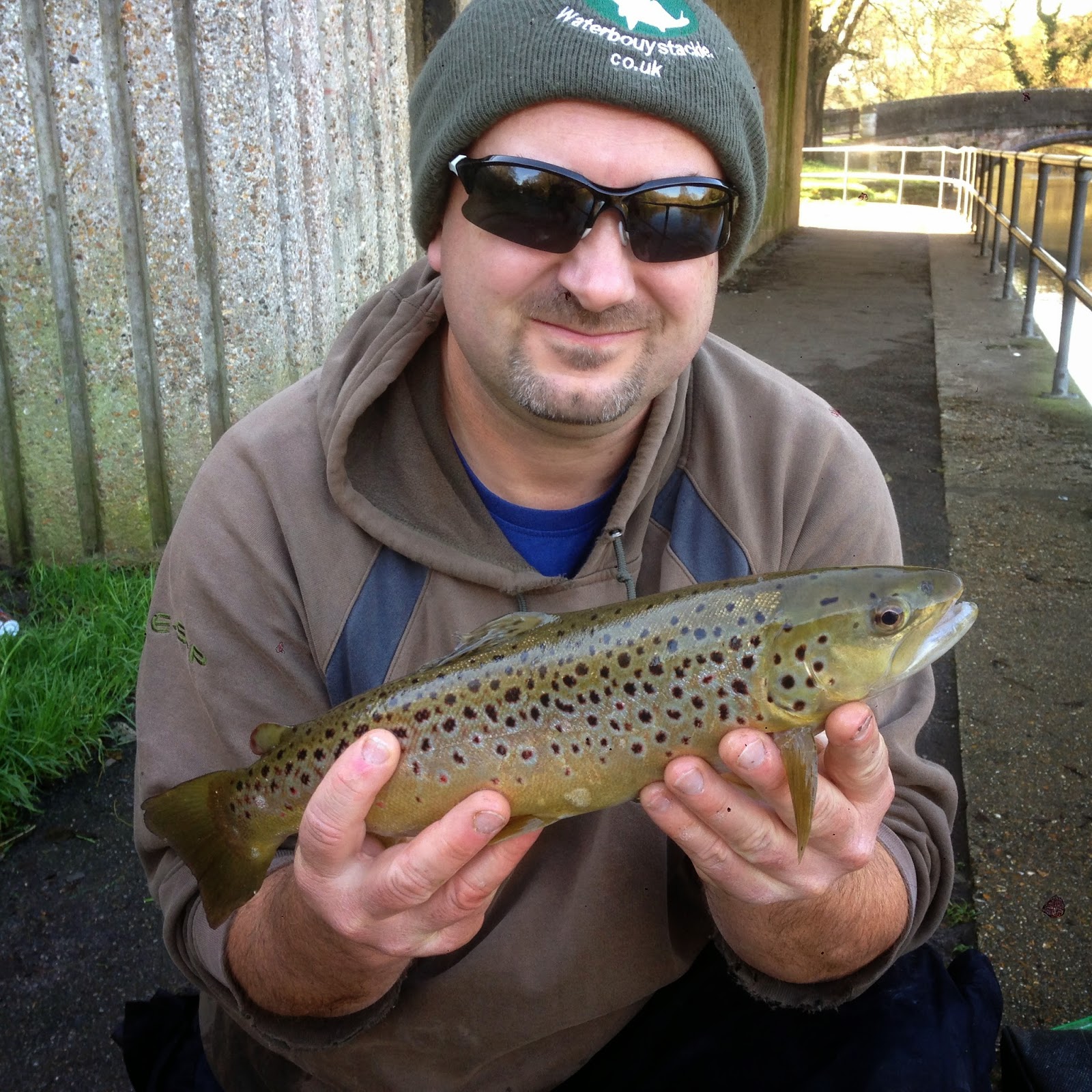 Another few casts and this gorgeous brown trout was eventually in the net after a real struggle trying to land it myself in the strong flow. Fortunately a fellow angler was passing by at the time and took this picture for me.This little turbo charged beastie seemed to take ages to land as it powered all over the river making full use of the strong flow. After this beauty was slipped back i was getting a dip on the float nearly every trot but couldn,t connect. Until i sent the float down again and just had a feeling something was going to take, and boy was i in for a surprise at what did take my bait. 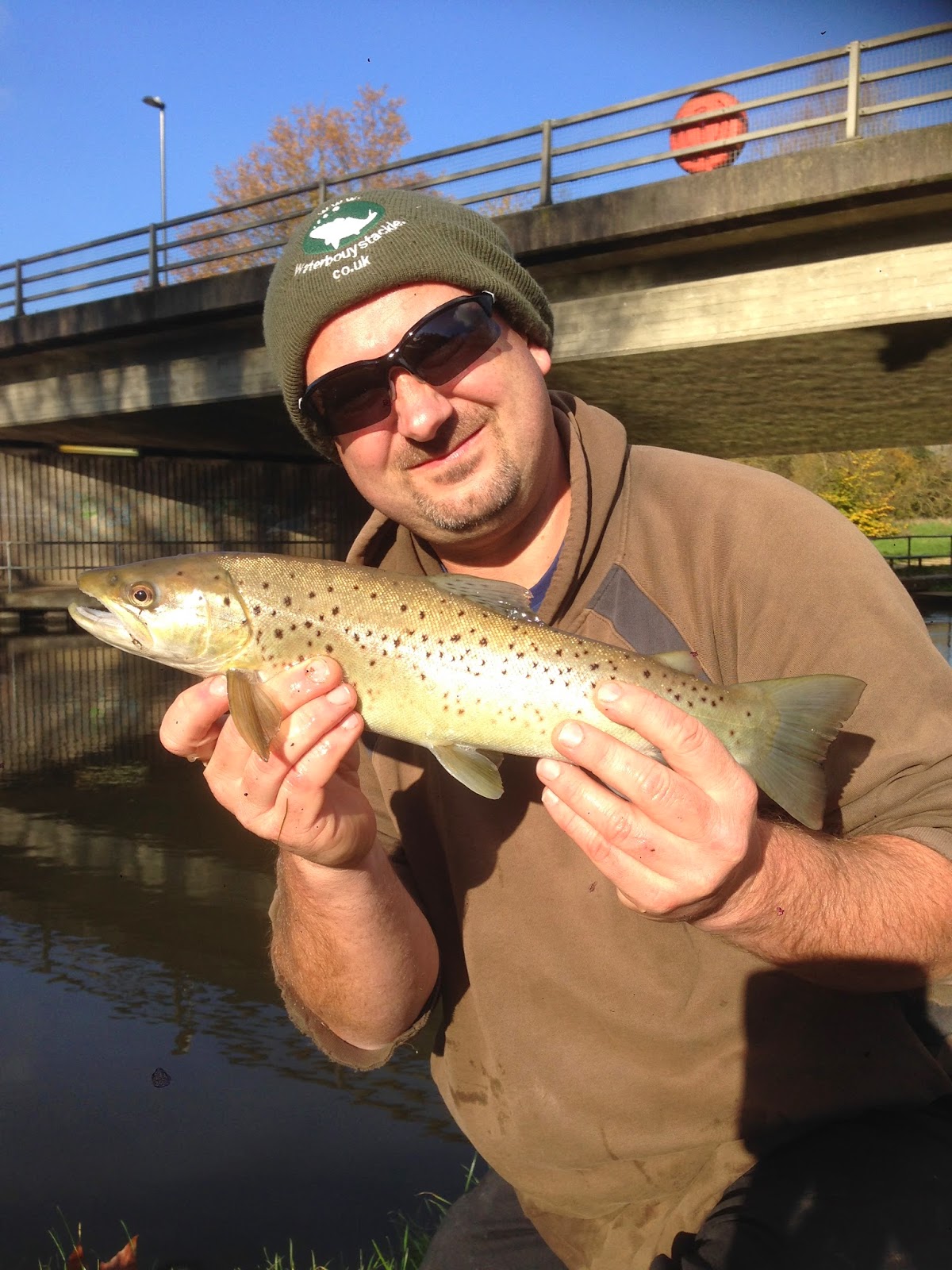 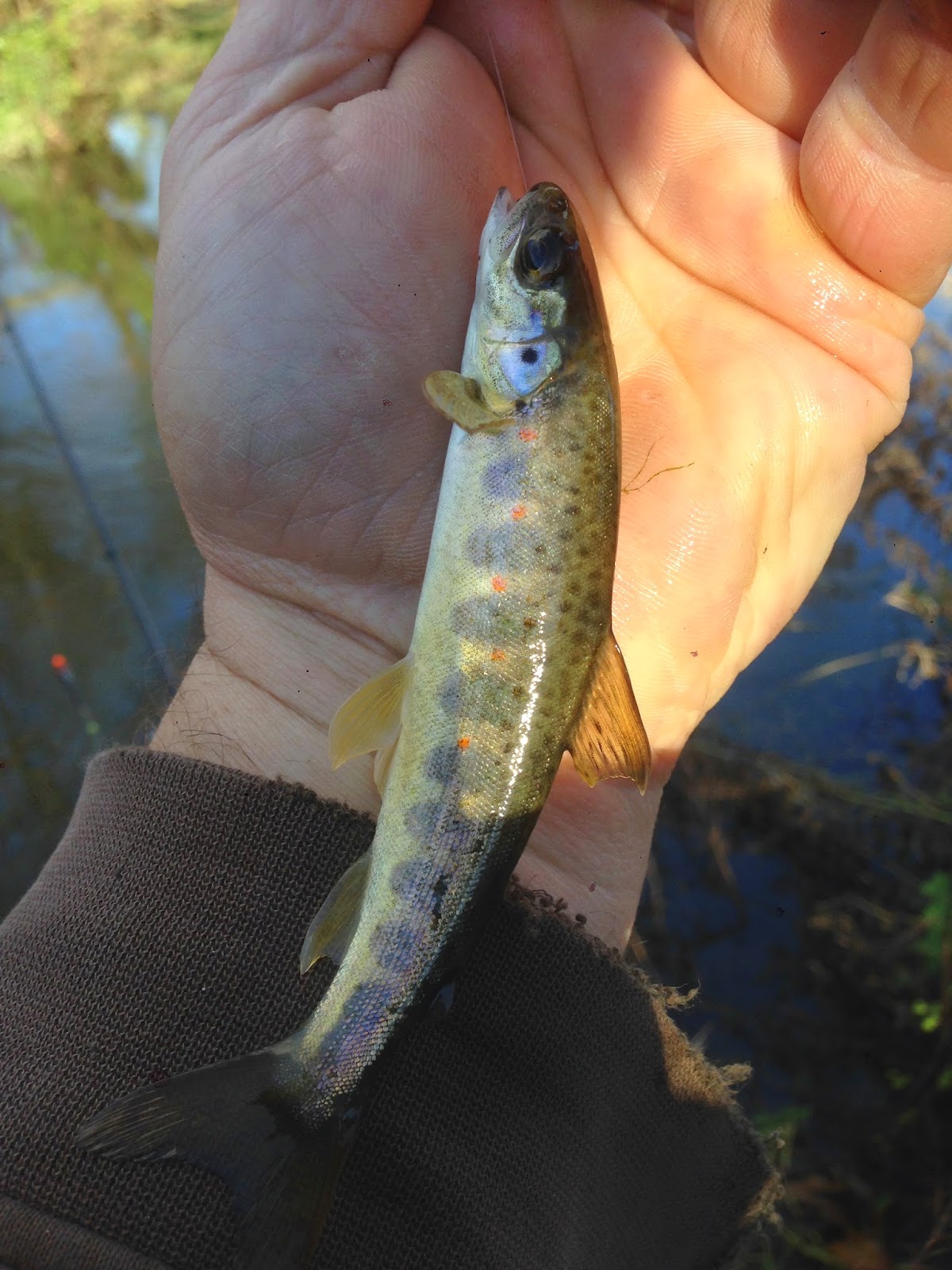 After an even harder fight than the brown trout i eventually landed my first sea trout, and what a beautiful fish it was too. Again another passer by did the honours with taking a picture for me, and they did a cracking job too. I was really chuffed with my fishing so far but what made it even better was the small salmon parr i caught a little while after. That small parr meant that i had caught 4 different game fish species in one day, on a river i had only fished the day before for the first time and using a technique i hadn,t used before. I was one very happy chappy for the following few days.....

I can,t wait to get back down there for another days fishing in the New Year as the other half has more work training to do........