Its been a couple months since my last post for which i apologize. Work and diy has got in the way again, a frequent occurrence for the past couple of years, but i do have a little something to tell all you fisher folks. I have been deliberating as where to fish this coming season as last season i joined a local water which i,d been a member of many years ago, a time i thoroughly enjoyed back then, but this time round i did not enjoy it due to the numerous Korda Klones fishing, and messing up, the place. It was obvious this was not the place to join again so i donned my thinking cap as to where to go this season. Maybe just stick to the local day tickets i thought firstly, then slapped myself hard for ever having such a stupid idea. What about joining BDAC or CAPS, local angling clubs with numerous waters on their books, but they didn,t really interest me one little bit. Then i remembered a very large water i fished a few years back which had practically everything i wanted out of a water. I,ve fished it plenty of times for the pike and done pretty well, it holds some good size tench, has big shoals of bream, the roach there are big and numerous, and it has some monster carp swimming in its depths. That was that then, i fired of an email to the fishery manager asking if there was any spare places on the syndicate and i waited with my fingers crossed for the answer i was looking for.

Thats what the email said when i opened it the following day, hows that for prompt. Whats more he even remembered who i was and my like of pike and tench, cant complain at that. Anyways a meeting was arranged for that sunday where i paid my dues and had a walk around this mahoosive spread of water to acquaint myself again. By christ she is a biggg water and didn,t look too appealing on a grey blowy day, but that aside i was looking forward to it.

A rough plan was hatched as to how i was going to tackle finding and catching the carp from this water and i was onto my next decision of which bait to use. After quite a bit of research and chatting with various bait buffs i opted to use a local bait manufacturer called ECLIPSE BAITS as i,d heard some good things about the baits they produced. 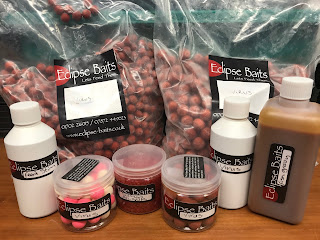 After a chat with Dave the owner i decided to give their Virus range a go as it stinks to high heaven and hopefully will have the pulling power i will need. Its a stinky fishy boilie and quite soft which i like and comes with various pop-ups, dips etc. Bait sorted the next stage was to get the rest of my kit ready for my first trip which was going to be in a couple of weeks, I couldn,t wait...