I had a couple of hours fishing a local estuary for thornback rays on saturday as i,ve been meaning to give it a go for the past few years and i,ve recently been hearing some good reports of late of a few of our spikey friends being caught from the shore just a few miles up the road from where i live. So as i had some squid in the freezer, always have, and also some nice frozen herrings left over from the pike season i decided to dust down the sea tackle Saturday afternoon and head to my chosen venue to fish the tide a couple hours either side of high water the same evening. Gear sorted out from the tackle room, reels re-spooled with my favourite 15lb Red Ice line, clipped down rigs and pennel hooklinks tied, bait put in the bag and everything including Oscar the springer were bundled into the back of the car and away i went to smell the salty air.

I fished an hour up and 2 down but only had one little rattle on my close in scratching rod. The bait was only lasting 15 minutes before it was getting stripped clean by the crabs. It was a beautiful evening though and i just enjoyed sitting by the water listening to the rigging of the moored boats chinking away as the breeze blew, only being interrupted by the quacking of low flying ducks and Oscar thundering up and down the pathway like a maniac, he,s a bit hypo even for a springer 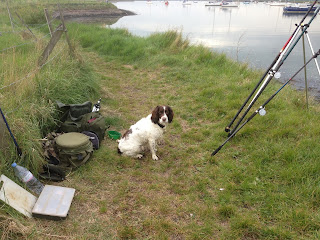 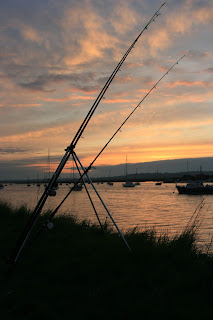 Oscar looks a little bored here but its because i told him to sit still while i took his picture. Little sod kept trying to eat the bait from my bucket whenever my back was turned. He enjoyed paddling around in the seaweed at the bottom of the seawall and trying to catch the low flying seagulls though. He certainly slept well that night after all the excercise he,d had. In fact so did i..

I took these two picture just before the sun set and have to say i,m rather pleased with the way they have turned out. 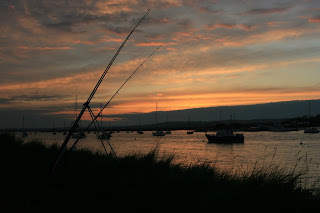 Over the past 10  years or so i guess i,ve tried and failed to catch a catfish in the UK. I,ve caught a few in France upto low 70lbs but have only ever managed the one of 26lb here and that was when i was targetting carp. I guess i havn,t actually fished for them that much and usually it would be a quick decision overnight session whenever i got a spare evening, not often i can asure you. Anyway the beginning of this week i decided i wanted to have a proper go for them and took a walk round a fishery 15 miles away and had a chat with the anglers there. They all confirmed what i knew in that there was quite a few catfish present upto 90lb. That was enough for me and this weds afternoon saw me hot footing it to the fishery in question kitted out with the heavy gear.

On arriving at the car park a couple of other anglers were just starting to unload their cars so as only fellow anglers can do i approached them and picked their brains about the water. Fortunately they were a couple of good guys who gave me a few pointers and areas to try. Right barrow overloaded with gear, god knows why i need to take so much, and off i trundled around the lake to what has to be the furthest i,ve pushed a barrow. I was knackered and sweating buckets when arrived at the area i,d been told about. I had a browse around and settled for a swim in the middle of a long arm of water which gave me plenty of scope.

An hour later i had 3 rods fishing with luncheon meat, large halibut pellet and large squid and octopus pellet cast to different areas of my swim. Two rods had a groundbait of brown crumb, halibut pellets, cat food, tuna and various oils mixed together and fed around them. The final rod just had a bag of halibut pellets attached to the hook with a chunk of luncheon meat on the hair and launched out to the left away from the baited areas.

Well nothing happened during the night other than a couple of dropped runs until 8am when i was starting to pack up i had a slow run on the luncheon meat rod. Rod picked up, clutch tightened and i leant into a train which just powered of down the lake making me loosen the clutch as it went. Want a fight this catfish put up for 5 minutes, tearing through a couple of weedbeds cutting the plants of and leaving them drifting on the breeze, churning up huge clouds of silt from the bottom as it ploughed along head down. Eventually i had it in the net and there lay my prize of 25lb 2oz of pure slimy muscle. 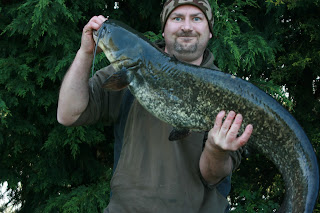 At last i had caught one by design, i was over the moon i can tell you. I,ll definately be going back to see if i can hook one of the bigguns. Excuse the psycho eyes but i was fighting to stop the fish from curling its tail, and it was a self take picture. 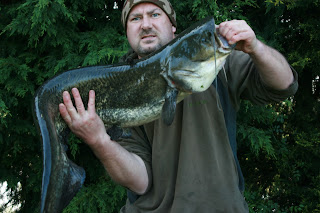 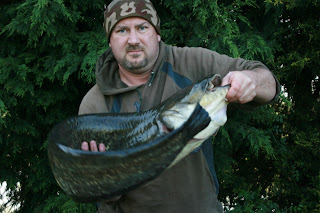 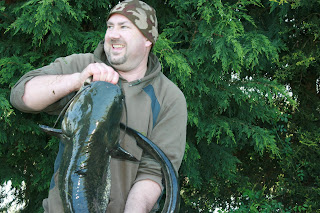 As you can see this fish really didn,t like its picture being taken. I was under the impression that catfish are generally well behaved on the bank, this one really beat me up. He did have the last laugh though as after i slipped him back i leant over to wash the unhooking mat and promptly slid down the wet bank into the lake on my ass right upto my chest. I just sat there and chuckled to myself. It was worth it...........
Posted by BRYANS ANGLE at 17.5.13 No comments:

Having moved house i decided to have a walk round a local lake i used to fish over 10 years ago which now happens to be at the end of my road. I had a nice slow walk around one evening and the place has hardly changed, nor has the bailiff who instantly recognised me even though i,m a couple of stone heavier and have face fur which he hasn,t seen. It was quite nice catching up with him he hadn,t changed a bit. Anyway as i slowly crept into a nice overgrown corner i spied a big paint brush tail waving at me from the nearside margin. On looking closer it was clear that there was a couple of good sized tench grubbing around the roots of some reeds. That was all the incentive i needed and the next day i was in the tackle room making up some rigs to have a go for these tench before they moved off. 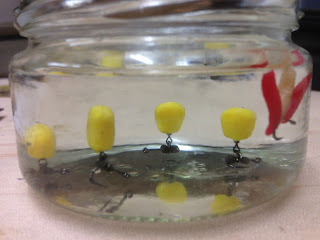 Due to the vegetation covering this little corner i decided to tie up some popped up artificial bait rigs. As you can see they looked the bees knees in my viewing class, ok its an empty posh pate jar. I got the rest of my gear ready  ET Sneeker rods, shimano baitrunners, 8lb Ultima flourocarbon mainline and Korda flourocarbon hooklinks as well as the usual paraphernalia, grtabbed some pellets and set of for a couple of hours after work. I used the Sneeker rods as although they are a bit heavy for tench really, they do have a nice softish action and would cope ok with any carp that might put in an appearance. Also seeing as though i would be fishing in a tight snaggy swim i didn,t want to risk teathering any fish if they got snagged in the reeds. 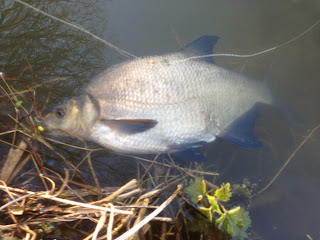 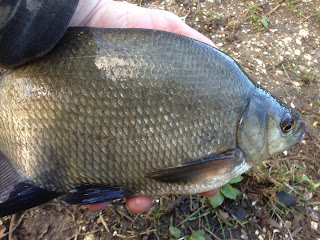 I had a cracking couple of hours fishing catching 3 bream to just over 4lb and a lovely tench of 4lb 12oz. And the Sneekers performed admirably giving a nice account of the fight without feeling as though they were outgunning the fish. One thing i will say though is that i won,t be using the method feeder again as the bream absolutely go crazy over it. My alarms were signalling constantly and i could see the rod tips twanging about as the bream were knocking the method ball about. I changed to small bags of pellets with the artificial corn pop ups as hook baits and still got a lot of knocks but they resulted in more hook ups, even though a few dropped off they were only small fish. I,m going to be spending a good few evenings on this water i reckon, it would be rude not too as its only a 2 min trip down the road in the car. Beats sitting in front of the tv.........

Another little video, this time of a small bream. 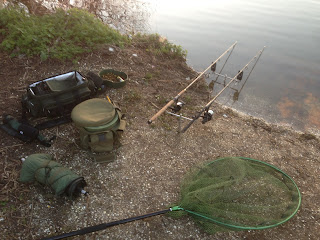 My short session tackle..
Posted by BRYANS ANGLE at 17.5.13 No comments:

Firstly i must apologise for not posting for a few months as i have been busy with the tackle business, WATERBOUYS TACKLE, and moving house. All has settled down now and hopefully back to normal.

I have managed a bit of fishing though, and actually managed to catch some fish as well, woohoo.... 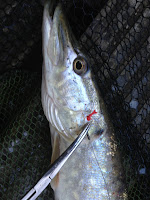 I had some great fun at the back end of the season catching small pike, on little float fished livebaits meant for perch, on a local river. No decent size perch though but i didn,t really mind as the pike always scrap well on my light Avon rod. 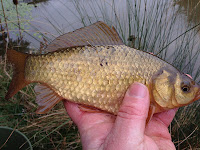 I thoroughly enjoyed catching some crucian carp from a small farm pond located on the same plot as Waterbouy Towers. I havn,t caught a crucian for more years than i care to remember. I used to fish nights catching them with my Dad when i was a teenager, using small pieces of breadflake fished a rod length out just over the nearside shelf. My Dad always beat me on size and quantity even though we,d practically have the floats a couple feet away from each other and fish the same bait and depth. 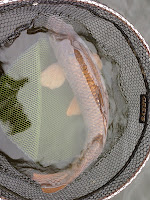 I caught this low double figure common carp whilst fishing lobworm for perch on a local club water one afternoon. I can asure you it went like a train on 5lb line and a light quivertip rod. Unfortunately i never did catch any perch from this water even though it has all the classic features you,d link to big perch haunts. There is big perch rumoured to be in there but i,m not sure where abouts, maybe i,ll give it another go this winter.


I,ve been having a little play with the video camera on my phone as well and quite looking forward to doing a bit more. Might even nick her ladyships video camera and do it properly sometime.