STILLWATER PERCH, OR LACK OFF

Midday i arrived at a local club stillwater to have a go for the big perch i,ve heard rumoured that live there. I,ve fished it a couple of times last year but as yet have not managed to bank any perch over a few ounces but I keep thinking that there must be some biggies in there as its teeming with stunted silverfish. Anyway I set up half down the right side bank as the other two swims that I was hoping to get in are taken, this doesn,t bother too much as last time I was here in the next swim, which I can easily cast to, I found a deeper hole in the lakes bed close in and had some good fun catching double figure carp on my perch gear. the weather was overcast but mild with quite a strong breeze, jumper weather really.

I mixed up a nice dark groundbait mix of 50/50 van den eynde super black and sensas red magic along with chopped worms, maggots, liquid worm and grub juice and feed an area close in along the bank and another  two rod lengths out where the at the bottom of the marginal shelf. I cast my floatfished lobworm to the farther spot but after a couple of hours not even a twitch on the float so I drop back into my marginal area and straight away start to catch some small perch. I was getting lots of dips and tugs on my float so I swapped over to my bit catching gear to see if I could winkle out some livies. Straight away on my maggot hookbait I started to catch some lovely roach between half pound to just over a pound, which was great but I really wanted some little uns. 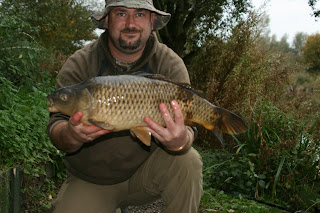 Then after 30 mins or so I hooked into something that just shot off across the lake. After 15 minutes I netted this ugly looking common carp which weighed in at just over 10lbs. After that fish the swim went dead and nothing else succumbed to any tactic that I tried.
Posted by BRYANS ANGLE at 29.11.11 No comments:

A few weeks ago I couldn,t contain myself anymore and had to point the truck Cambridgeshire way and fish the mighty Fenlands for their predatory inhabitants. I normally go for the weekend but unfortunately i could only do the one day so on Sunday 16th October I made my way North at stupid-o-clock to get to my chosen destination at first light.

I arrived at my chosen river before light and set about carrying my kit to my first swim, a well known big fish area once upon a time. I set up two rods on floats, one as a deadbait and the other as a free roaming livie rig, cast out the deadbait and them proceeded to winkle out a few nice silvers for the other. When I had enough of them I cast my float to the near margin to my left fishing 3ft deep over a bed of heavy weed. Over the next couple of hours I had 2 mid single figure pike and bumped of a good double on the lives. It was great fishing the lives as the water was really clear and I was fishing just over the top of the reeds and could see the pike stalking my bait. I,ve never witnessed that before. 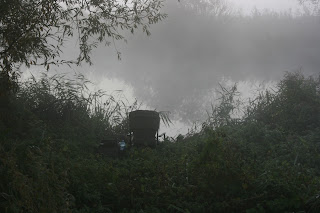 Around late morning I upped sticks and had a drive around my usual haunts to get a feel for the place again and to see if anything had changed. I took a look at a lovely area I found last season on The Little Ouse and couldn,t believe how clear it was, that put me of fishing there to be honest as I could see the bottom quite easily. After a couple of hours driving from location to location I settled down in a swim that has been really kind to me over the years throwing up 2 twenty pound pike as well as numerous big doubles as well as some cracking zander to my rods. 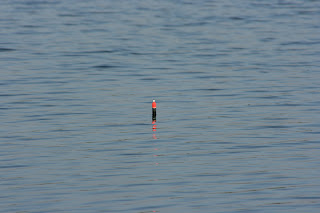 I set up one rod on ledgered deadbait cast to the far reeds, one rod on sunken float pasternoster lobbed just past the near marginal shelf and the third rod was on my favourite free roaming livebait. Well I had a couple of takes on the ledger rods but nothing held on, but the float rod managed to bag me 3 pike around the 6lb mark which scrapped really well on my new ET Sneeker rod. I also had a small perch on a orange chubby shad from a small carrier stream close by which was the first perch i,ve had from there.

It was a long way, and expensive on fuel, to go for a days fishing but I thoroughly enjoyed every minute of it. The few fish I had were an added bonus as I just enjoy being out in the wilderness.............
Posted by BRYANS ANGLE at 15.11.11 No comments:

Few weeks ago i took delivery of my new toy, a second hand viper icon bait boat. I bought this because i,m planning on fishing a large water this winter for pike and its hopefully going to help me fish some of the distant areas. Well as you can guess i was gagging to try it out, especially as i also bought a fish finder for it as well, so on a rainy sunday morning i was set up on a local gravel at first light with everything ready for her maiden voyage. 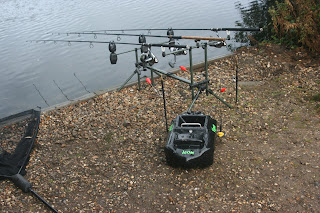 I took her for a trip around my swim to get a feel for the controls and also to see what the bottom was like. This really surprised me as the contour of this lake is a lot more uneven than i thought, with troughs and humps rising and falling by 2-3ft here and there. I located a nice channel about 60 yds out which was behind a weed bed which i dropped a bait on. Then a hole 20 yds out which you wouldn,t guess was there as it was in the middle of a weedbed, so a bait went there as well. Finally i sent a floatfished roach out to an area where i saw some grebes working out in the middle and let that drift around with the wind about 4ft of the bottom in 10ft of water. The traps were set in areas i wouldn,t really of fished. 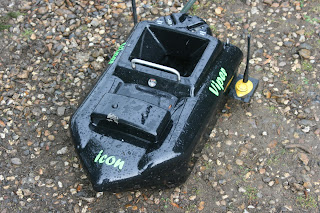 Well to cut to the chase i didn,t manage to bank any pike but i did get takes from all the spots i found, especially the float set, which i,ve done well on on this pit, which is great as far as i,m concerned as i probably wouldn,t of fished them if i hadn,t used the boat. I packed up about midday, as had family arrangements, a wet but very happy man. My bait boat performed admirably, i found some nice spots for the future, and i enjoyed myself using a new technique.

By the way i believe the reason i didn,t manage to land the takes i had was because of the heavy weed in the water. I felt the fish but it felt dull as though there was weed on the line. Thats my excuse and i,m sticking with it.........