Hi all, i havn,t been fishing much of late due to work commitments so havn,t had anything to report on really. I,ve spent my spare time, which there hasn,t been much off, either doing the dreaded diy or just sitting comatosed on the sofa watching the big flashing window on the wall.

I did actually manage to get a mornings fishing on bank holiday Monday at a local club water. The weather was due to be nice in the morning and wet and horrible in the afternoon, so i opted to get up early and beat the rest rest of the anglers and arrived on the bank at 4.30am. OOOOOhhhhhh that was hard to do..

I set up in a nice swim with a big bay in front of it and lillies also 5 yards out. My approach was a small method feeder cast to the far margins of the bay in hope of a passing tench and possibly a carp, and float fishing tight to the near lilly pads primarily for tench again but basically anything that came along. Within 15 mins my method loaded with dark groundbait, hemp, corn, micro pellets and dead maggots and wetted with hemp oil, liquid worm, csl liquid and my favourite for tench molasses, splashed down in the desired spot. Hookbait was 2 pieces of sweetcorn topped with a fake piece of maize, again a favourite bait for my tenching. Well in a nut shell i didn,t manage any tench but i did have a couple of bites and also landed a rather ugly but turbo charged 4lb common carp which gave me a right bashing until i managed to net it.

On the floatfishing side i used double maggot fished on the drop as this was the only method that actually managed to get a tug. I tried bread, sweetcorn and pellet fished on the bottm in hope of a tench but no joy. When i slipped on a couple of maggots they were intercepted on the way down by some cracking rudd ranging from 4-10oz i guess. Immaculate they were too, probably because most anglers who fish here go after the carp i guess so probably uncaught. If the bait managed to make its way to the bottom then i was rewarded with some beautiful roach, again between 4-10oz. 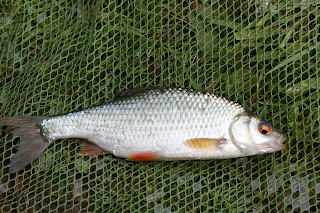 I ended the morning with what i reckon was around the 15lb mark of beautiful silver fish. I,d forgotten how much fun it was to catch good sized rudd and roach.

What i did notice was the lack of small bait robbing silverfish, i have a hunch that it could be due to the large population of eels in this pit. Last year when i was targetting the eels at night i had to bring the rods in around midnight so as i could get some sleep as the eel rods were screaming of all over the place. Also i noticed that some of the roach and rudd i caught  had what i,m sure were bite marks around their vent. There wasn,t actually any tooth penetration but there was plenty of scale damaged, similar to a perch attack but from underneath, i,m guessing from where the eel is surging upwards to grab its prey. There is definately some BIG eels in this water as i,ve seen pictures of 2 over 7lb and a few over 5lb, but so far i,ve only managed them to 3lb. I,m definately having another go for them this year if i get the chance..
Posted by BRYANS ANGLE at 12.6.11