This sunday just gone i was up before it was light and winging my way to the local River Chelmer for a wee spot of dangling. Unfortunately i got my timings wrong and actually arrived a good 30 minutes before the sun even starting to rise. So in darkness i loaded myself up with tackle and set of to the area that i fancied fishing for perch and maybe a pike or two. Carefully i set up in my chosen swim trying not to make too much noise as i knew there could be a predator nearby in the bankside reeds waiting for the sun to rise and highlight his prey.

Well i got my float rod set up ready to catch some livies and also my perch rod set up ready to fish said livies just as it started to get light. Looking up the river it was a bit foggy which looked great and just added to the serenity as i sat there sipping on my cup of rosie. 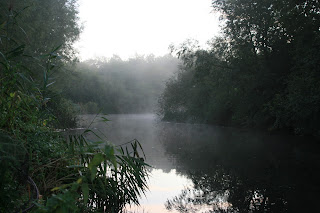 As soon as it was light enough to see my float tip i started to fish single maggot on a size 22 in hope of some nice mouth size silver fish. Well the theory was there but over the few hours i fished i only managed two small roach which i could use as livies. I was otherwise totally mobbed by miniscule bleak, the tiniest you,ve ever seen were grabbing my maggot and running around with it but only now and then did i manage to hook one. And when i say they were small i really do mean it. 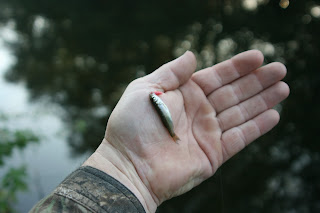 The two livies i did manage to catch went on to do me proud by catching me the two smallest pike i,ve ever seen. Perfect predators in minature they were, and i was very tempted to take them home and put them in a fish tank but thought better of it and returned them to grow to be my new pb,s in the years to come. 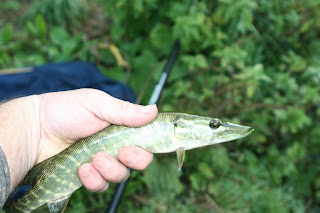 I also managed a couple of perch and a couple of chub to half pound i guess on my float tactics. All in all it was a beautiful couple of hours fishing, not as productive as i had hoped , but most enjoyable. Whats more i was back at home eating a cooked breakfast by 10am and diy,ing by 11am to keep the missus happy........
Posted by BRYANS ANGLE at 6.10.11