Many years ago I spent a week fishing a beautiful fjord in Norway on a trip arranged by a friend of mine Allan. The pike fishing was quite hard going both with bait and lures and over the coarse of the week I can only remember a few small doubles to be the largest caught. None the less a great time was had by all.

And whats the point of mentioning my Norway trip you may ask, other than me reminiscing, well on said trip I had great fun using a small firetiger Ace Flipper jerkbait. This little lure managed to attract pike from literally anywhere I cast it, only jack pike mind you but fish none the less. upon arriving home I tried this little lure on my usual waters and again they succeeded most everywhere. Unfortunately early one winters morning while luring on The Old West I got snagged on something which I couldn,t move from the river bed which resulted in the inevitable braid snap. My bestest favourite lure was gone forever. And to top it all on arriving home and scouring the net, tackleshops etc I could not find any to replace it. I was most upset and gave up the hunt after a few weeks. 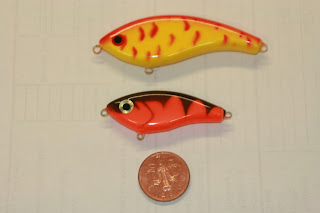 But a few days ago while I was trolling the pages of Ebay to see if there was any bargains to be had I stumbled upon a listing for the top flipper in the above picture. Oh yes, thought I, i,ll be having that thank you very much. This chappie also had other stuff for sale and on browsing them I found what I lost over 6 years ago. A small Ace Flipper in firetiger, or at least I think they call it firetiger, again i,ll have one of those says I.

The actual lure I lost was the same size as the top one which is about 85mm, but as you can see the firetiger is smaller at about 65mm. Thats great as far as i,m concerned as one of the reasons I originally bought the lure all those years ago was I thought it might work for a perch or two. And it did, so the smaller version is hopefully going to be even better. I have also bought another few of these lures so I have a good stock of them, they are also a really good price at only £2.50 each and a bit for postage, fantastic.