Well I,ve actually managed to have a bit of fishing lately as she who must be obeyed has been dragging me to  the weddings of various friends and I have been grumbling at how little time i,ve had to go fishing. In the end I think I actually pissed her off so much that she told me to shut the f*** up and go for the weekend . I didn,t need telling twice and I was off like a shot to my secret squirrel syndicate water.

When I arrived all the swims I fancied where occupied so I opted to fish the deeper water as there had been a few out from that area the previous week. After setting up camp in my chosen swim I found that there wasn,t actually much weed here, unlike the rest of the lake which is top to bottom with eel grass. Out went a couple of dozen spombs full of particle to a nice gravel area 10ft out from some reeds and two rods were dropped in the area. One on fake corn and the other on a snowman. The third rod was launched as far as I could towards the island on a chod rig. 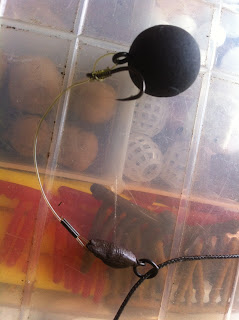 I,m not going to bore you with mindless details i,ll just come out with it. I BLANKED!!!!!

I had one run on the distance rod which resulted in me hooking something which thumped like a goodun then flat rodded me before straightening my hook. Other than that it was a nice pleasant relaxing weekend but no fish caught...

The best thing about the weekend was the dinner iIcooked saturday night, chicken cooked in a creamy pepper sauce with mushrooms. Now that was dining in style. 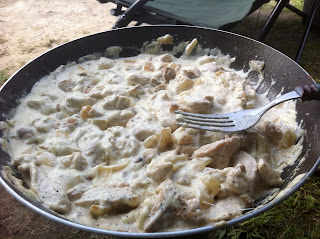 It was even better than the left over roast pork and roast potatoes that I had a couple of weeks previously on the bank. 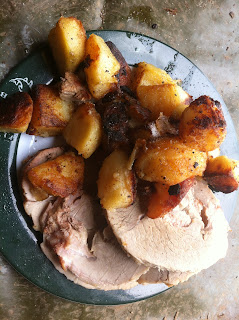 I have now decided that rather than just eating quick and easy food like sausages, bacon etc, I will endeavor to cook proper tasty grub. It might mean taking a little more cooking kit but i,m sure it will be worth it. I,ll keep you informed.
Posted by BRYANS ANGLE at 2.7.12