A spur of the moment decision saw me pulling up to my syndicate water just as it was getting light 2 weeks ago with a mind to catch a carp, well lets face it to try and catch a carp. I opted to fish an easily accessible swim because, to be honest, i was in a lazy frame of mind and didn't really fancy pushing my barrow full of kit very far. I have fished this swim once last October and unfortunately had lost a fish late one night due to a hook pull so know it has form. 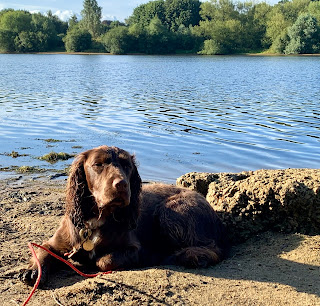 I,d brought Choccy along to keep me company and he was quite content chilling and soaking up the sun as i went about setting up my home for the night and making myself comfy. Once this was done out came the marker rod and i started to thrash the water to a foam as i searched for 3 likely areas to target the old mud suckers. I wasn't too bothered about the disturbance i caused as my marker was dragged through the swim countless times, or with the depth charge water eruptions as my big balls of boilie crumb and goundbait hit the spots, or even with the splashing and clouding up of the water as i waded around baiting and casting, as i wasn't expecting any action, if any, until later that evening going into the night. Once all the disturbance was over i sat back and promptly fell asleep for a few hours. 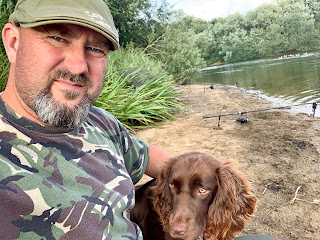 Nothing happened throughout the day, as i expected, but coming on 7 o'clock i decided to recast the rigs and rebait the areas ready for hopefully some night time action. I had my left rod cast across a bay to my left to the area where i lost a fish last year, my middle rod was only 20 yds out in front of the swim just past the weed line and my 3rd rod was cast to the base of a bridge leg which screamed fish. All rods done and it was time for a nice dinner of italian meat stuffed pasta in a creamy cheese sauce washed down with a nice latte followed by bed as i couldn't keep my eyes open. About midnight my middle rod let out a few bleeps followed by a slow run, which after tripping out of the bivvy, i eventually lifted into. A nice weight was felt on the end of the line which kited to my left followed by a couple of head nods and everything fell limp, i was gutted, i,d lost another fish. Upon reeling in and inspecting the broken hooklink it was pretty obvious that i had hooked a pike and it had bitten cleanly through the braid. Not so gutted now i tied on a new blowback rig using a virus bottom bait and trimmed down pastel yellow pop-up and recast to the same area. 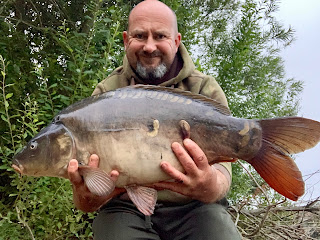 Just before first light my middle alarm burst into action waking me from a deep sleep and by the time i had reached the rod my spool was slowly ticking away as it gave line to whatever was on the other end of my line. Lifting into the fish it was pretty obvious it was a carp as it powered off away from me taking line of my tighten clutch and flat rodding me in the process. I loosened the clutch a little as i didn't want to bully it and pull the hook out of it's mouth. A few minutes passed before i saw the beastie roll in the weed and wading out to my knees a carefully slipped the net under my first carp from this huge water. I was elated at this capture and to be honest was a bit dazed as well so i sacked him up, made a coffee and set up the unhooking, camera and weighing gear. A quick weigh, a few photos, an admiring glance or ten and i slipped him back to his watery home. He weighed slightly over 17lb, not that his weight is of any importance as he was a little beauty and i,d managed to catch a carp from over 350 acres of water. I've been walking on cloud nine ever since.

Shortly after returning my prize and downing another latte i packed up my kit and made my way home a very happy man indeed. 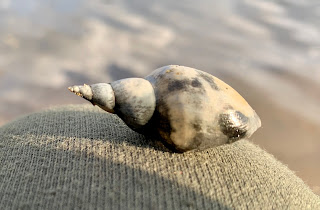 As a little side note, the margins of my swim were littered with dozens of empty snail shells and as you stood and watched the edges of the marginal weed you could see hundreds of snails of all sizes slowly moving around on the gravel and weed fronds. Perfect food for any hungry carp passing by and i reckon that the fishy, oily ground bait i was using around my hook baits would probably of  been covered in these snails making it even more attractive to them.