Last week i fancied a spot of sea fishing on my local River Crouch so one evening set about getting the gear ready for a little first light dangle at a local mark. I like to tie a few rigs at home so i don't have to fumble around by the water so a few 2 hook flappers, for the whiting and small fish, were made up as well as a couple of big hook pennels for anything larger swimming by. 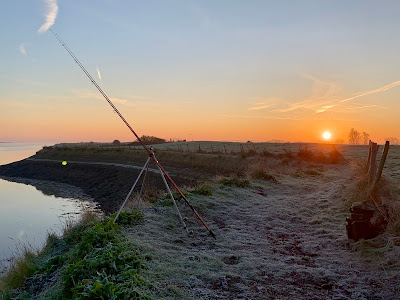 The temperature gauge in the van was reading 0 degrees as i drove the short distance to the river and the heavy frost crunched under foot as i walked to my chosen spot just as the sun was just rising over the horizon making getting out of bed early worthwhile. The tide was already 3 hours down from high water and i had only planned to stay for a couple of hours so the rigs i,d tied the previous evening were quickly attached and launched out at various distances. Bait was strips of mackeral and squid as well as some frozen black lug on the small fish rigs and a cocktail of large fillets of mackeral and squid for the big fish. 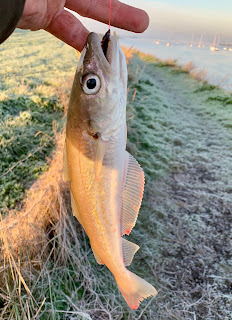 From the off the rods were rattling away and after missing a couple of bites i connected with a small whiting. A quick unhook and back out went the rig. I then proceeded to catch at least one, sometimes 2, whiting on every cast to the flapper rig with only the odd whiting to the bigger bait, but they were bigger whiting. 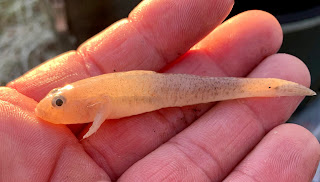 One of the larger whiting had this small 'goby' protruding from its throat so i carefully eased it out and thread it onto a hook and cast it back out, and i caught another whiting on it too. The bites started to slow down as the tide flow eased and after 2 hours of quite busy fishing i packed up and headed home for my breakfast and a nice cup of latte. I lost count of how many fish i caught but it had to be a couple of dozen with a dozen or so sizeable fish taken home to make into fishcakes for 'Her Ladyship'. 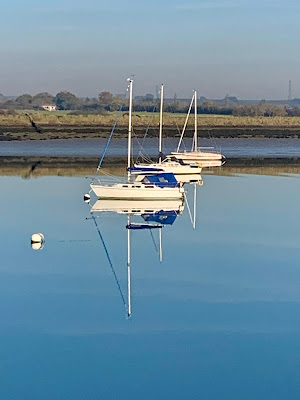 I was quite surprised that only whiting showed up in my catch, i would of expected a couple of pouting or maybe a basslet or two as well.

A beautiful couple of hours spent by the water catching a few fish, what more can a guy ask for.