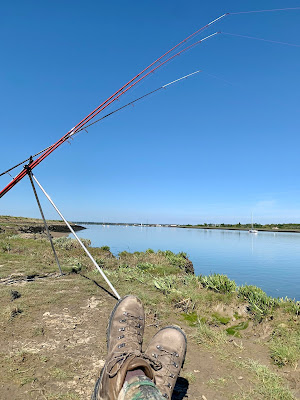 So due to the Covid virus lockdown, and prior to that  being too busy, i actually haven't bee fishing for over 4 months, and i,ve been gagging to get back out and wet a line. Fortunately this week good old Boris started a 5 stage lockdown lift and this week was stage 1 and allowed us back out fishing as well as other hobbies which can be carrie out whilst applying the social distancing rules. This meant that i could dust down the fishing gear and get myself out there fishing. I just had to decide what i wanted to fish for as i have a quite a few options locally. In the end i opted to go to the local saltwater river and try for a thornback ray before they moved out of the river for the rest of the year. Luckily enough i had prepped all the necessary gear, and stocked up on frozen bait,  before the lockdown was brought into force. So yesterday armed with 3 rods and a rucksack i walked the half mile to my chosen spot which was a marshy platform which jutted out into the river and is a popular mark for the thornies. Half  hour later i had 2 rods set up and fishing for the rays and an old carp rod set up as a scratching rod in hope of luring anything that might swim by.


Baits were whole squid, herring chunk or a cocktail of the both fished on pulley pennell rigs for the rays and just a basic 2 hook flapper baited with frozen black lugworm and strips of squid, herring and mackeral fished on the scratching rod hopefully a school bass or maybe even a flatfish. I,d only just got all the rods out when my rod fished to the righthand side registered a pull down followed by a slack line, text book ray bite, which i duly grabbed and wound in the slack line until i felt some resistance followed by a small knock, signalling there was life on the other end, which i then pulled into. A heavy weight was felt followed by a couple of knocks and something pulling back, fish on. Heart thumping i carefully played the fished to the  marsh edge, fortunately there was no dramas getting the fish to the shore, before being able to hand line it up the final couple of feet of marsh 'cliff' and place my prize at my feet. Result!!! I had caught what i had came for, a beautiful little male thornback ray of maybe 4lb. Neatly hooked in the side of the mouth the hook was easily removed before i took a few pictures and slipped him back to his watery home.

A quick rebait and out went that rod again in anticipation of further action to come. I,d love to say from that point on it was constant bite a chuck but unfortunately that wasn't to be. Every 15 minutes or so i,d reel each rod in to check if there was any bait left but most of the time the hooks were bare, stripped by the crabs. Its only to be expected on this river as the river bed is alive with crabs of all sizes not to mention all the micro fish species that must be living in its depths. I,d arrived shortly after high tide, and it was only a small tide too, so really didn't expect to be able to fish the marsh spot for more than a couple hours as there is a big shallow area in front of the marsh drop off which does dry out at low water. So just as i was thinking of packing up as the mud was showing in from i noticed a little judder on my lefthand rod followed by the tip pulling steadily downwards. Initially i thought some weed might of snagged my line as there was quite a lot of it floating with tide but i then noticed a couple of knocks on the tip and quickly picked the rod up ready to feel if there definitely was a fish attached to my line. After a few seconds i felt another 'knock' on the rod tip followed by a steady pull so i reeled tight and pulled into another fish. A similar fight to the previous fish, heavy weight felt with a few knocks, and after a couple of minutes i had another small male thornback beached on the mud to the left of the marsh area. Happy happy boy was i.....


After that fish i decided to pack up the kit and make my way back to the van as the water now pretty low and the sun was getting pretty hot. I,d enjoyed my few hours fishing and managed to catch 2 of my target species which is always a bonus when you set single species fishing. The one thing i did find strange was that i didn't even have a little knock on my scratching rod and that technique pretty much gets some action every time i use it in the river. Oh well i,m not going to complain though, two skate and a morning fishing in the sun in beautiful surroundings was plenty good enough for me.


The tides are getting later into the evening next week so I'm hatching a plan to fish one evening into the dark at a location on the river i found a couple of years ago. I fished it last year and had some good bass fishing on a bright and breezy day but i reckon that fishing there into the hours of darkness could result in a bigger bass or two being present.  Its a cracking spot with an outflow from a small lagoon which spills over some rocks into the river on one side and a lovely big slack water, on the dropping tide, area on the other as well as access to deeper water close in. It screams big bass to me so i,m planning on giving it a good try this year. The only downside to this mark is that its a 2 mile yomp to reach it, which isn't too bad if i don't have any kit with me but when laden down with all my fishing gear makes it a bit of a grueller.