A couple of weeks ago i decided to have a couple of hours after the bass that i,ve been hearing rumours about that have been getting caught on the River Blackwater near to where i live. I chose a nice evening tide giving me high water at 9.30pm, ordered 3 packs of ragworm and waited for the day to come round. As it luck would have it i nearly didn,t go as the other half booked me in to have my tattoo finished off and a cancellation had come in and i was next on the list. So thinking that my arm was going to be smarting like a mofo i opted to give the fishing a miss that evening. It turned out that the tattoo was finished quicker than i thought and it also didn,t hurt half as much as the rest did so i rushed to get my gear together shot off, arriving at my chosen mark for 7.45pm. 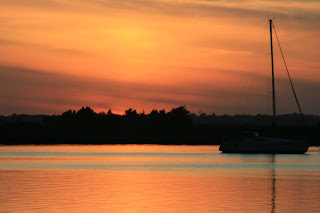 It was a gorgeous evening with barely any wind and what turned out to be a cracking sunset. As i was tackling up i could hear fish splashing around about 100yds or so out and about 300yds further up the bank. I didn,t move up to them as the water is quite shallow close in and where i was setting up had deeper water which i thought would be a better bet. The water was gin clear and you could see the bottom 6ft out and 3ft deep.

As the sun started to set i started to get lots of rattles on the rod tips indicating that there was something fishey around. At 8.45pm i hooked and landed a beautiful little bar of silver in the shape of a scale perfect bass of around half a pound. Watching it swim away as i released it was great, i,ve not fished in estuary waters this clear before and i could see it working its gill as it took a breather before slowly but steadily swimming of back to the deep. 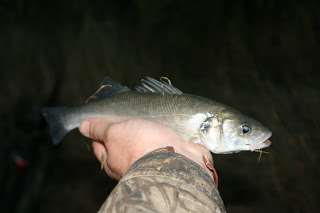 I fished through to low water around 11.30pm and managed to land another 5 bass to 1.5lb on my worm baits cast both close in and as far as i could lob them. It was a fantastic nights sport and i,m really glad that i made the effort to give it a go. Next time though i,m taking peeler crab with me as i reckon this might winkle out the better fish. I had good rattles and thumps on every cast but couldn,t connect with them as i reckon they were probably the smaller basslets. I did get a very odd bite which was very like the ray bites i used to get when i used to boat fish a lot. I did manage to get it moving but the hooklink broke in the end. Most interesting... 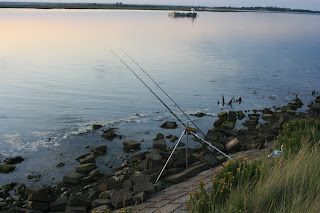