This saturday just gone i sneaked out of the office early to have a couple of hours perch fishing on a local river. I,ve been itching to return after my pike trip there a few weeks back when i mhad a couple of big perch try to take my livebaits meant for old esox.

Well i grabbed half a pint of red maggots and a pot of lobworms from the local tackle shop and set of to the river arriving around 2.30pm. I love this little stretch of river, its only about 50ft wide with barely a flow unless its been raining heavily, and has boats moored down both banks creating lots of hiding places for the ambushing perch. There was some big shoals of bleak dimpling the surface just off the boats which i took for a good sign so set about tackling up in their area. 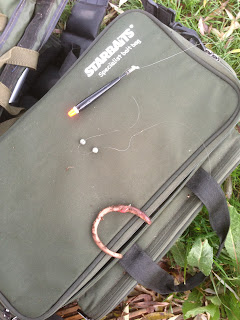 My set up for float fishing a lobworm is very simple. I like to use a chubber float as it carries a nice bit of weight as well as being able to hold up a small livebait if i do manage to catch one. This has a float stop either side of it to lock it in place, its only a few feet deep under the boats so i don,t bother with having the float sliding up and down the line. A couple of swan shots cock the float so it sits a little high in the water so i can see if theres any small fish playing with bait. Then i have a size 10 Kamasan animal hook tied to 4lb line. Lastly a nice fat lobworm which i hold on using a sliver of red plastic cut from a 30plus bait saver flag. Nice and simple but more importantly nice and effective. 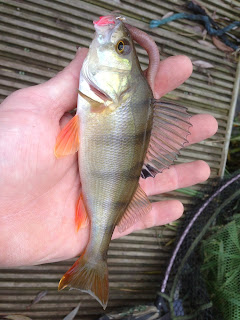 I fished on until dark and had a few perch of the size in the piccie and a couple of smaller samples, but unfortunately none of the monsters which i know lurk in this stretch of water. It was a lovely relaxing way to spend a couple of hours after a hard days work though...
Posted by BRYANS ANGLE at 18.11.12

Email ThisBlogThis!Share to TwitterShare to FacebookShare to Pinterest
Labels: 30plus, kamasan, lobworm, perch