Well the first session was a quick couple of hours fishing on a local syndicate lake. Its a water which hasn,t been fished properly for pike and is over 40 acres so theres plenty of scope there, but as mentioned no one has seen any signs of pike activity let alone seeing any mooching around. Well i did a few hours late one freezing cold afternoon moving from swim to swim around half of the lake float fishing various deadbaits but didn,t even get twitch. The water looks as though it could throw up some good pike as its big, got plenty of weed growth and bankside cover, has plenty of underwater features and is teeming with rudd. I had no luck this time but i,ll give a few more trys over the course of this winter. 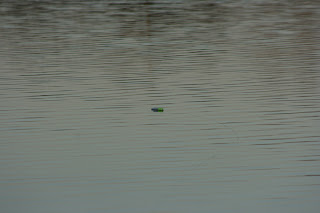 
The next trip was a dawn trip on a local river for a couple of hours, again after Esox. This was on part of the river which i have not fished before as i thought it was fished pretty heavily as it has easy access. How wrong was i, the first quarter mile or so has pretty worn banks where all and sundry have been fishing but after that the banks turn wild and it looks pretty much untouched, just what i was looking for. I fished along this stretch for a mile or so until i came to a lovely area where the back channel from a weir enters the main river and fished there for an hour or so. Unfortunately i didn,t manage to bank any pike as it was a day or so after the cold spell had finished so i reckon that had slowed the fish up, and there was also a hell of a flow running. I did get one take on the crease of the fast water but didn,t connect. I will definately be back as it screams fish.

My last trip was with Ryan to his syndicate, again after pike and this trip was actually successful for a change. I managed 5 pike with the biggest going 13.5lb, and Ryan managed 3 pike to 5lb. We started of chucking lures in some likely areas and i got a hit on the 5th cast but it came off. After that i had three different pike following my lure into the bank at different times which was fantastic in the clear water. I wish i,d taken a few pictures of them really but the excitement of actually seeing the fish took over. Unfortunately no pike came to the lures i think they were interested but still sluggish from the cold weather. The fish i did catch were covered in leeches where they had been resting up. It was a cracking day weather wise and the company was good as always and to top it off i actually caught some hard fighting pike. 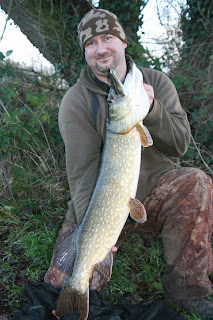 13.5lb and she was in pristine condition. 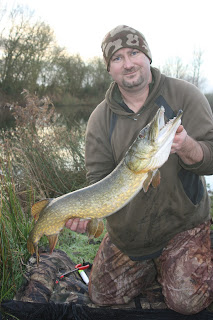 A hard scraping little fella.
Posted by BRYANS ANGLE at 19.12.12