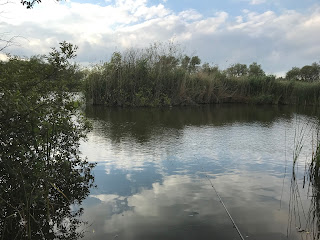 Last week i had some energy left after work and decided that i fancied a couple of hours fishing. The only problem was i couldn,t make up my mind whether to go to the local park lake and have a go for some surface carp action or pop to the local estuary and target the ever wary mullet or trot up the road to a local day ticket and just float fish for whatever came along. The later option was chosen. 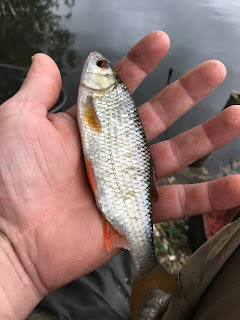 After quickly sorting some gear and grabbing a tin of sweetcorn i was set up in my chosen swim on a beautiful local water. I love this water but unfortunately it can get a bit noisy with the local scrotbags riding bikes along the paths behind you and generally making a nuisance of themselves. Today they were well behaved but unfortunately there was a small group of Europeans on the opposite bank who were chatting very loudly and constantly getting phonecalls. They were putting the fish they caught back in the lake so thats definately a good thing, so i can,t complain too much considering the general reputation they have. 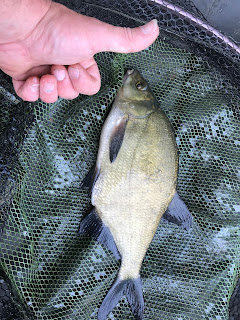 Anyways back to the fishing. I baited a nice looking spot next to a bush on my left in 5ft of water with sweetcorn and small pellets then set about tackling up my road. First chuck in and i had a nice bream of around a pound or so on my corn hookbait, actually scrapped well on the light gear even taking line at one point. Next chuck the float dipped and i struck into something a lot heavier, i reckon it was a small carp as there was no way i could stop it from powering away from me. Unfortunately my hooklink parted and away it went. After tying a new hooklink on and re-casting nothing happened for ten minutes then it was a bite a chuck. Rudd and roach were the main culprits with the odd bream thrown in for good measure all giving a good account of themselves and in tip top condition. I fished for a couple hours before hunger got the better of me and away home i went for my dinner.