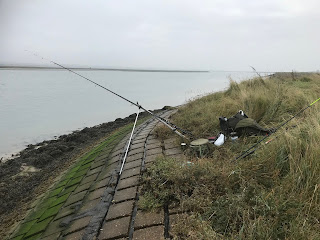 End of November i had a week of work to do some work around the house and as the weather was due to be mild, for this time of year anyway, i thought it would be a good idea to have a mornings fishing on my local River Crouch for the whiting that reports had said were there in numbers. And i thought it would also be good to take my pooches along for the session as they love it down there. After dropping the other half at the train station first thing i drove the 5 minutes it takes from my house to Fambridge with tackle and dogs in the back of the van ready for our little adventure. Loaded up with my gear and two nutcase dogs running amock in front of me i trudged the 2 miles, yes my chosen area was 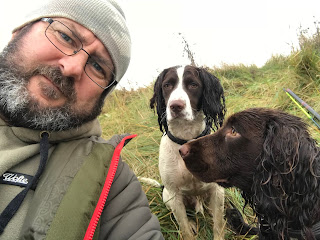 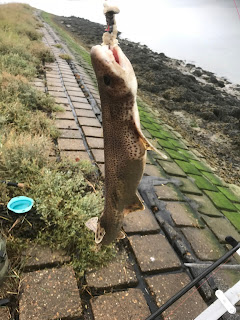 2 flipping miles from the van,  to a nice bend in the river which narrowed the river quite a bit and also had deep water at the bottom of the wall. i,d walked the dogs to this area a few weeks previously when the tide was out and it scream fish as the river narrows up considerably at this point as it bends slightly, and also theres a big shallow bay type area to the left which also looks good for a bite during the summer. Out with the rods and on with the kettle and it wash,t long before my right hand rod started to knock. Leaping up to the rod it was rattling away like a goodun by now and a switch strike and couple of steps backward had me connecting with something fish like thumping away at the end of the line. 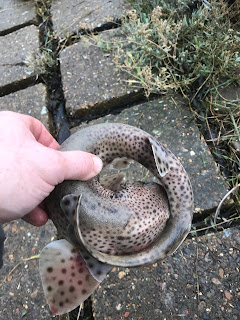 It had a bit of weight to it so my thoughts were either a good size whiting or possibly a sea unicorn, cod to those not in the know, but i wash,t expecting a writhing dogfish 'Doggie' thrashing away on the surface. I was really happy with this catch as although i,ve caught hundreds of dogfish of off boats when i used to boatfish a lot back when i was younger, i had only ever caught 1 doggie from the shore and that was further up the River Crouch at Wallasea Island. Rebait and a recast and the other rod was rattling away now as tightened down to the lead of the recast one. Same procedure, strike walk back a couple steps and reel down to feel for some weight, and i was into another fish. Low and behold in comes another dogfish, i could,t believe it. Over the next hour i had rattles on my rods regularly with a few more dogfish being landed. High water saw the bites stop for an hour or so, i,ve often found this anyway, before action resumed with more doggies chewing on my worm and squid baits. Action slowed so after another hour i packed up and made the long walk back to the van.

In total i had 9 dogfish, if i remember rightly, and had at least twice as many bites. I was really surprised that no other fish were landed, maybe the pack of dogfish that was in front of me had scared them off. All in all i had a great session, as did Paddy and Choccie, and also had a seal follow us as we were walking to the spot. It an amazing area along the River Crouch and i intend to explore more of it with rods pooches over the coming year........
Posted by BRYANS ANGLE at 7.1.19