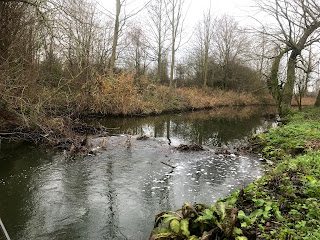 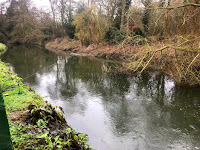 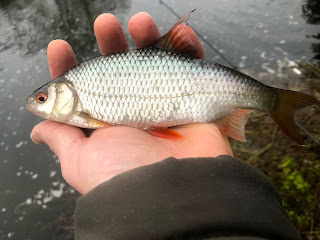 With Christmas out of the way and copious amounts of food consumed i needed to get out in the fresh air and stretch my legs so of down the local tackle shop i went and came out with a couple pints of maggots and a box of lobworms. A good few years ago i had a little explorative walk along a small river 15 or so miles away from me, as i had heard a couple of chub had been caught, and thought it would be worth a try at some point but had never really got round to it. Well i had an itch to roam a river and seeing as the River Chelmer is such a shadow of its former self a new venue was needed, and seeing as i didn,t have the time to venture upto Peterborough and fish the River Nene this tiny little water would be my chosen venue. 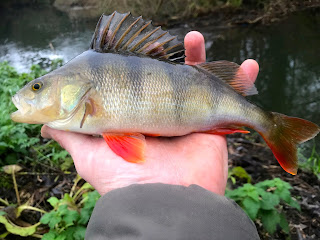 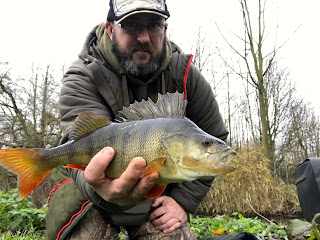 I arrived on the banks at first light after a short walk and set up a chubber float to fish a tiny little weir pool, of off the main river, which fed a tiny stream which ran through a nearby golf coarse. First trot down and the float sinks away and i,m into a nice roach, happy days. Countless cast produced countless roach and small perch to my float fished maggots, i was a happy bunny but it was time to move on and try my luck for something a bit bigger. Big perch and hopefully a chub were firmly in my mind.

A short walk along the river and i came across a nice looking fallen tree which screamed perch so i set up a link ledger and settled in above the fallen tree, slid a nice fat lobworm on the hook and flicked it out to the opposite bank close to some reeds. Just as the rig was about to land in the water a small silver fish flicked out of the water a couple feet away from my bait, a good omen i thought. I,d only just tightened down and set a slight bend in my rod tip when it rattled away and i struck into a fish. Only a small perch but i was happy that my swim choice had been good, after all i,m really not a river angler more of a stillwater kind of guy. On went another lobworm, out went the cast and on went the kettle. With a latte in hand i was happy, looking around at the local wildlife and revelling in how quiet it was as the low hanging mist stayed for most of the day. As i was daydreaming the rod tip pulled and after spilling my cuppa down my leg i struck into a bigger perch of around half a pound. This little tyke put up quite a scrap before being netted so i opted to fish the down stream side of the tree to rest the area i had already fished. First cast against some reeds just out of the main flow and i had a very quick heavy pull down which resulted in me getting snagged up. It was shame as i had felt a couple of heavy thumps as i picked the rod up. A quick re-tackle and dropped another juicy lobworm in against some over hanging branches a little further downstream. After a couple of minutes the rod tip pulled down and i was attached to something pretty powerful and very angry. After a spirited fight in the stronger current up popped a cracking perch of around 2lb with dorsal bristling in defiance, i was now a really happy bunny. My aim had been to see if there was any decent perch in this tiny river and my hunch had paid off. I could of packed up there and then but i wanted to try my luck see if i could tempt a chub as well. 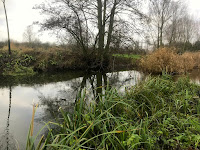 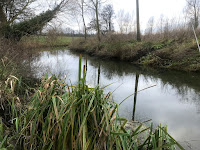 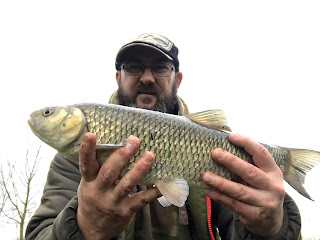 After a couple of pictures i packed up my tackle and walked another half mile or so up river to what looked like a chubby looking area where the current run across to the opposite side of the river leaving a nice long near bank slack which ran along some nice reeds, perfect thought i. In goes another juicy lobworm and straight away i started to get little plucks on the rod tip. Small fish thought i, but every now and then there was a bigger pulldown which had me striking at mid air. This kept going on for 15 minutes before i had an odd little quiver on the tip followed by a couple small pull downs which i stuck at and was rewarded with a heavy thump as whatever i was connected to did its best to snag me in the nearby reeds. Initially i thought i,d hooked into a good sized perch as i didn,t really think i,d actually catch a chub. Imagine my surprise after a minute or so of give and take when a big pair of white lips appeared beneath my rod tip followed by the body of a good 3 lb chub. After another short tussle i slid the net under my prize and released a sigh of relief. I couldn't weigh the chub as the battery was flat in my scales, schoolboy error i hadn,t checked it when sorting out my kit, but my guesstimate was 3-3.5lb. A beautiful looking fish it was too and after a couple of pictures i slid her back into her watery home. I was now walking on air. I fished another few areas with just a few plucks on the rod tip but caught nothing else, not that i cared.

Overall my hunch about this little river, you could jump from one bank to another in some areas, containing some decent perch worked out and actually catching a chub, a good one at that, really put the icing on the cake. I will return to see what else i might be able to winkle out from this tiny waterway but to be honest i,m not actually that bothered as i,m more than chuffed with what i have already caught.
Posted by BRYANS ANGLE at 12.1.19