So lately i havn,t had a lot of spare time to go fishing due to work and the ongoing attempts to complete the extension i,ve built on my house, this has meant that i havn,t been to my syndicate for a few months so the limited fishing i have done has been very local and only for a couple of hours at a time. Now i,m not complaining too much about fishing short sessions locally as there is some not too bad waters nearby, and i have caught ok, but its meant i,ve had to scale my tackle down considerably to allow me to be more mobile and chase fish down rather than wait for them to come to me. This has been good fun as i used to be very mobile when i first started fishing and its quite nice to do so again. 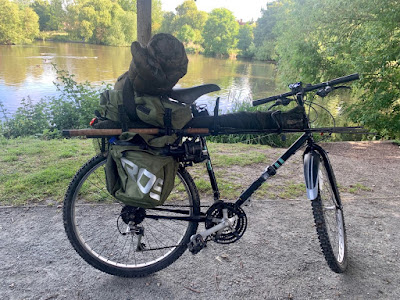 With two waters being within 1 mile away, another around 3 miles, and miles and miles of  the River Roach and the River Crouch starting within 2 miles away i thought it would be a good idea to kit out the old mountain bike to use as my mode of transport for fishing these venues. I purchased a set of panniers for the back and also some luggage straps to hold the rods and set about converting a knackered old bike into a prime fishing vehicle. The bike needed a bloody good service first as it hasn,t been ridden for nearly 10 years, so once that was done on went the panniers, front and rear lights, mudguards, new pump and my now scaled down carp kit. I was ready for the off the following weekend to the local park lake. 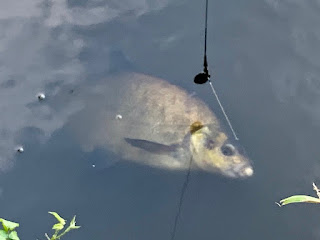 A little after first light saw me gently cycling around the water before pulling up to my chosen swim and damn near falling off the bloody bike as i swung my leg over the back and got caught up on the rolled up unhooking mat. Fortunately there was no-one around to see this minor mishap as i chuckled to myself whilst setting up my rods. I could see a few carp moving 20 yards out in front, hence me choosing this swim, so out went a ronnie rigged Eclipse Virus pop-up coupled with a small pva bag off crumbed virus boilies in hope of attracting a carp down in the water to have a munch. Once that rod was sorted i started to catapult out some mixers as this water is always good for a bit of surface action. After 15 mins or so i had a couple of carp regularly feeding on the mixers that the masses of ducks weren,t nicking when my alarm sounded and the clutch started to tick. Leaning into the fish i thought i,d have a small carp attached as it wasn,t really doing much when all of a sudden up popped a bream of around 4lb with my bait hanging out of the side of its mouth. Not my chosen quarry but at least i had caught, unhooked, returned and back out went the rig. 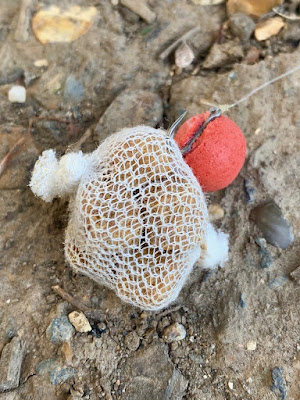 I was having a lot of trouble with the parks ducks getting to my mixers before the carp, and even going for my bait, so i had to put the old thinking cap on to try and stop the little thieves. The end result was a virus pop-up super glued to a Fox floater hook and then attaching a pva mesh bag with 6 mixers inside to the hook and casting this to any rising carp. This resulted in the ducks not really noticing that there was any freebies floating around, also i was catapulting some mixers of to my left to help deter the beasts from my hookbait. This worked well with a few rises to my bait but no hookups until i had a couple of bleeps on my alarm which i glanced over too before turning back to see my floater rod nearly disappearing over the reeds it was resting against. Grabbing the rod and leaning into the fish just made mr carp very angry. 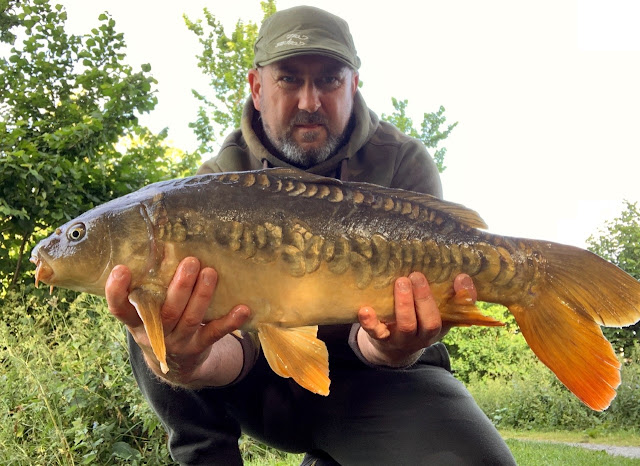 After a cracking fight on my 9ft Sonik stalker rod i finally landed my prize, a lovely mirror carp of around 12lb. Unhooked, a quick piccie and he was slid back into his watery home. This disturbance basically killed the swim so after another 30 mins of firing out mixers and very little showing i decided to pack up and head home for some breakfast.

A nice little result for a couple of hours dangling.....