Around May time thornback ray start to show up in catches from the shore and boat, in my local River Crouch, as they migrate into the shallower water to spawn i believe. This gives us the chance to catch a few for a couple of months before they drift away to wherever they go to. For the past few years i seem to of  been too busy to fish for them locally and on the the odd occasion that i have had the time to wet a line i havn,t been able to connect with one. Well i thought i,d have another try a couple of weeks back as the weather was due to be nice and i just fancied having a dangle in saltwater. Weighed down with all my kit i stumbled the mile  or so along the sea wall to my chosen marsh area that i thought might produce the goods. After nearly falling 'arse over tit' over a bramble and then having to 'hop' over a small adder as it crossed my path i finally dumped my gear down at my chosen spot and sat on my bucket a huffing, puffing sweaty old man. 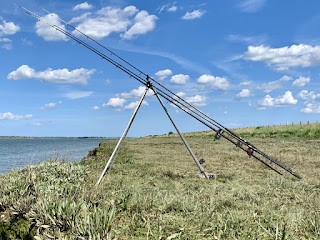 After a few minutes i,d gotten my breathe back and set about getting my rods tackled up and fishing. When the tide isn,t pushing through too hard here i like to fish with 3 rods to give myself a better chance of catching something. I set 1 rod as a close in rolling rig with 2 hooks baited with cocktails of worm, squid and herring, and drop this out no more than 10-20 yards so it can fish at the bottom of the rocks and quite often catches some nice bass when they are in the river. The other 2 rods were baited with herring  and squid on pennell rigs and cast from 75-100 yards out in hope of a thornback or even a decent size bass.

The sun was strong and there was a slight breeze which was lovely to sit in but like most fishing situations not great conditions. After 3 hours of tide up and another hour of tide down i hadn,t even had a rattle on the rod tips, most disappointed was I. Sharon had come down with the dogs for a walk and had just walk further along the bank when my distance rod baited with a nice big herring fillet registered a nice tap followed by a steady pull down. I grabbed the rod and lent into whatever was on the end of the line, half expecting it to be a big clump of weed, and whatever was on the other end pulled back.

After a few minutes of  giving and taking line, i played it like a pussy as i was sure it was a ray and i didn,t want to lose it, up popped a nice little skate at the bottom of the marsh drop-off. I hand lined it up the clay and lay it on the marsh before unhooking the lovely prehistoric looking creature. I,ve not caught many thornback rays but always admire the beautiful patterns across their back and the evil looking thorns along the length of their tail. Fortunately Sharon had returned from her walk and took some nice pictures before i slipped the wee beauty back to its watery home. Before anyone asks, yes you can eat them, sold as skate wing in the chippy,  but i don,t like the taste of fish and would much rather return them to grow on and breed to produce more fish to catch at a later date. 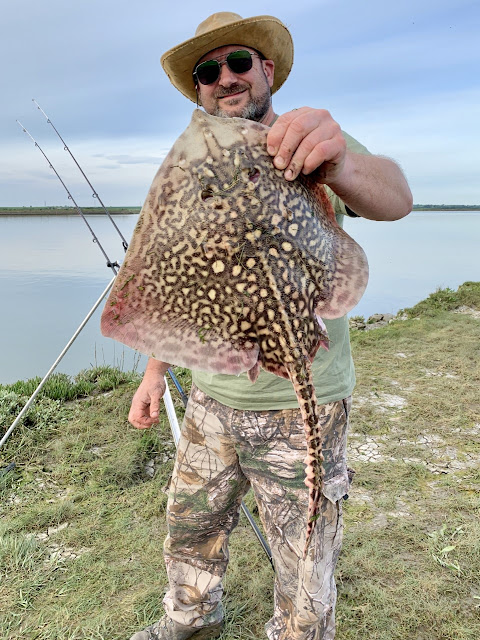 I fished on for an hour or so after the capture and possibly had another bite that didn,t materialise into anything before packing and going home for dinner.