Ryan and myself spent a couple hours at first light this morning fishing for the perch again on the River Blackwater. It was breezy, overcast and had a slight drizzle in the air, my ideal conditions for perch fishing.
We started off in our favourite banker swim where Ryan had 3 perch around the 2lb mark with the biggest going 2lb 2oz on his lobworms.
I bagged a lovely fighting fit but fat pike of 10lb 2oz in the next swim on my little livie. That pike put up a great fight on my perch gear and was a real pleasure to catch. it was also in immaculate condition and only lightly hooked in the scissors. I actually believe that this might be my biggest pike so far this winter. 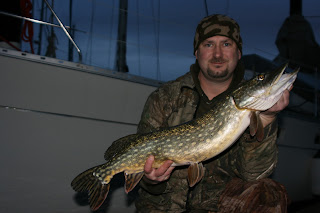 We moved swims to another banker and Ryan had 2 small perch and another larger one of roughly 1lb 12oz. I just sat there and watched the smaller perch harassing my livebait until a much bigger perch shape ghosted out from under some weed and proceeded to swim around my bait before sauntering of in disgust. It was good to see.
We swim hoped along the bank where Ryan had another micro perch and i had a small jack and bumped of a larger one before we packed up and went home.
Not a bad couple of hours considering we were homeward bound by 10am.
Posted by BRYANS ANGLE at 13.2.11