A couple of days ago i was sitting at my desk in the office trying my best to catch up on my ever increasing  paperwork but my head wasn,t in it. All i could think of was sitting in the sun by some water and attempting to catch some fish. I tried in vain to dismiss these thoughts and carry on number crunching but to no avail. Eventually, as always, the uncontrollable desire to wet a line over came me and i downed pen, turned off the computer and toddled of to my tackle room to grab some kit.

The problem now was what i actually should fish for and where. Within a 10 mile radius of where i live i have 6 club waters, 1 syndicate water, numerous miles of day ticket river and god knows how many miles of the Crouch and Blackwater estuaries to fish. Decision decisions!!!!! In the end i opted to take the light lure gear to my syndicate water and have a bash as last time i was there i spent an evening watching good size perch smashing through shoals of fry underneath the tips of my carp rods. It had to be worth a go.............. 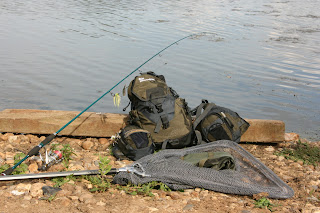 Well in a nut shell after a couple of hours lure tossing i hadn,t even received a tug. What made it even tougher going was the weed coverage of the lake, its covered in the stuff. Literally every cast resulted in a strand of weed hanging of the hooks. In the end i gave up and just had a nice leisurely stroll around the lake. What i saw in a shallow bay area of the lake made me stop in my tracks. Everywhere you looked big rudd were topping and rolling over the weed. Not just a few here and there but lots of them all over the area. For half an hour i watched numerous small shoals of them drift around .

That was all i could take so i shot of back to get some float gear via the local tackle shop to pick up some maggots. Around an hour later i was back at the lake setting my gear up in a swim just of off the weedy shallow area, the theory being that a constant rain of maggots on the water would draw the rudd out of the weed into slightly clearer water. I needn,t of worried as soon as my first pouch of maggots hit the water the constant boils on the surface showed that the rudd were already there. Out went my weighted waggler and within seconds my float shot away. After a cracking scrap on 3lb mainline with 1lb 8oz hooklink and size 18 hook a gorgeous rudd of just under a pound lay in my landing net. 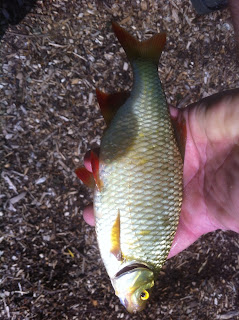 And thats how the next couple of continued. I,d fire out a dozen maggots then cast my single maggot hookbait over the top of them then as my unweighted bait dropped through the water a bar of gold would snaffle it. I ended my short evening session with over 30lb of pristine rudd with half a dozen going over the 1lb mark and the rest being over half pound in weight. There was definately bigger rudd showing but i couldn,t seem to get through the smaller ones to get to them. Not that i,m complaining. 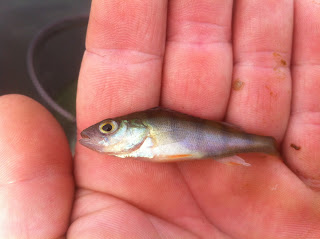 The smallest perch i,ve ever caught. I,ve seen some big perch hunting in this lake so i,m looking forward to when the cooler weather arrives so i can target them. 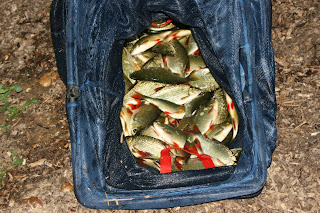 I don,t normally use a keepnet as i prefer to return fish straight away but i wanted to see how many rudd i,d catch on this occasion. Over 30lb of gorgeous golden rudd in pristine condition.
Posted by BRYANS ANGLE at 29.8.12