Last weekend i took my other half Sharon and our two dogs to a secret mark for the day to have a picnic and  see if i could bag a thornback ray. The weather wasn,t particularly good being very overcast with a strong wind blowing and a bit chilly. Sharon didn,t mind and neither did the dogs so of we set. After a nice offroad drive along the bottom of the sea wall we were at my chosen destination and carting the gear over to the otherside of the sea wall to fish on top of an old pill box. Sharon took her camera and the dogs for a walk as i proceeded to set up my tackle on top of this comfortable fishing platform. After one slip cast resulting in a big birdsnest i had my two rods cast out, one with a 2 hook flapper baited with ragworm for the bass and the other with a big herring fillet for the thornies.

Just as Sharon got back from her walk i had a knock on my herring rod followed by a big slack line. Quickly winding in the slack i felt another thump and walked backwards pulling into the fish. I could feel a heavy weight thump again on the other end and i have to say i got a bit excited. Sharon was taking the mickey out of me as i started to talk to the fish, asking is it what i,ve been looking for and dont come and other mumbo jumbo that us anglers say as we,re playing a good fish. Fortunately Sharon took some lovely action shots as i played the fish in. There it was in the weed at my feet, my very first shore caught thornback ray, only the second i,ve ever caught, the first being from a boat out Hayling Island many moons ago. Although the fish was wrapped up in my trace, the hook was well and truly in its mouth. 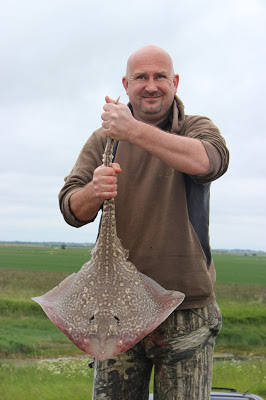 Here is my prize at 7lb 13oz, not the biggest fish but not only my first shore caught skate but also the heaviest shore caught fish i,ve landed. Was i a happy boy, you bet i was.

Sharon also got some cracking pictures of the RNLI performing a rescue on a boat with engine failure just up the shore from us. It was good to watch the boys in action, they were quick and efficient in securing the boat then transferring the people on board to their rib and taking them to port, then roping the boat to one of their ribs and towing it back to port as well. Excellent work lads, job well done.