I ventured onto the rivers a day after the new season had begin as the weather was beautiful and i couldn,t be bothered doing any work. By 3pm i had walked the mile and half to the small weir pool that i fancied having a fish in. I,d stopped of in a couple of chubby looking swims on the way and had spotted a couple of small chublets drifting about but seeing as the water was really clear and the sun bright i decided on not giving them a go. The weirpool on the other hand looked great, slightly coloured with plenty of turbulence and a lovely slack area in front of my swim.

I set up my quivertip rod and cast a maggot feeder out just into the flow with a 2 maggot baited hook attached. Straight away i was into fish, mainly small chub with some roach to half pound a few nice dace, i havn,t caught any dace for years, and a few perch to around the half pound mark. 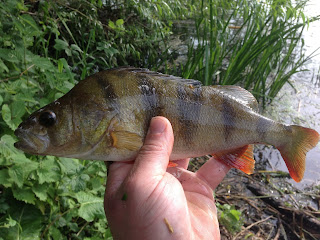 All the fish i caught were in immaculate condition, well fed and hard fighting. I did somehow manage to lose a much bigger perch at the net, i think i was bullying it a little too hard too be honest 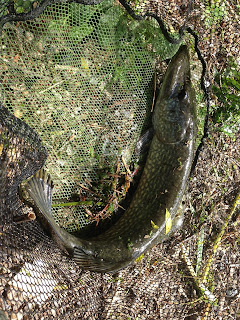 When i was bringing in a small perch all of a sudden there was an explosion of water and a nice pike of around 5lb grabbed it. After 5 minutes i somehow managed to land the opportunistic pike, if you look at the pikes back in the picture you will see the perch it had grabbed, fortunately he was none the worse for wear and swamm of strongly.

After fishing for a few hours i had caught a really nice mixed bag and as the sun was starting to set i decided to catch half a dozen small silvers and set of in pursuit of some nice perch. I fished a few swims until dark and managed to avoid the perch, but i did catch 4 pike to 8lb which i was more than happy with. The pike scrap really well on my light perch gear. Unfortunately i seem to have lost the pictures of the bigger pike which was a stunning looking fish.