Yes its true i have actually had a few short fishing sessions over the past few months, not many mind you..

I,ve had a dabble for perch on a local river which resulted in a few tiddlers, a couple of lost Jack pike and a nice sargeant of around a pound and a half. That was a 2 hour sessions after work on a bright sunny day, so i was pleasantly surprised when i actually had a bit of action. I started of catching a few small livebait which proved more difficult than you,d think as all the silvers i was catching were too big for perch, so i fished closer to the river bed and managed few nice size gudgeon.

I had a days fishing with a friend on his syndicate water which was enjoyable even though neither of us caught any carp. In between the torrential downpours we could see some cracking size carp showing over our baits but not one fell for our traps. 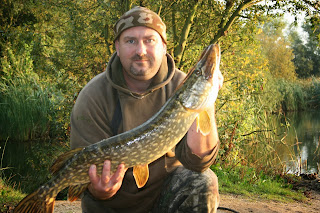 
I,ve may not have done much actual fishing but i have been doing a lot of research into local waters for perch and pike for this coming winter, as well as locating some slipways on the broads as i,m hoping to take my boat up there soon. I,ve also been researching the local sea fishing as i fancy doing a bit more this winter. I found some lovely looking spots where i,m hoping to have a go for the flounder in February, and some nice marks where whiting and codling will be on the cards too.