Over the years i,ve walked across and fished alongside countless amounts of locks on numerous rivers and canals, but i,ve never really given much thought as to what they actually look like once empty. A couple of days ago i took a walk along a local river and found that one of the lock gates had been removed and the lock itself had been drained and obviously is having some work undertaken.
I took these pictures with my phone just to show how deep the lock actually is. I wish i,d taken a picture of the removed lock gate but didn,t think of it at the time. 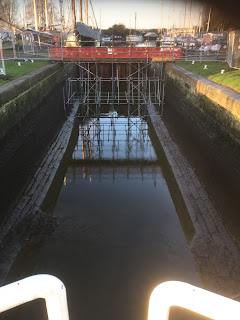 The gate fits where the scaffolding is now, and i,m standing on the middle gate. 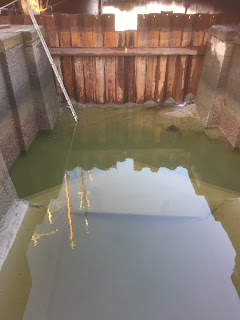 Standing on the scaffolding looking inland. Its amazing that all that is holding back the river is these steel sheets thumped into the river bed and that one steel rsj. There must be one hell of a lot of pressure pushing against that sheeting. I wonder if you get danger pay for going down that ladder and working at bottom. 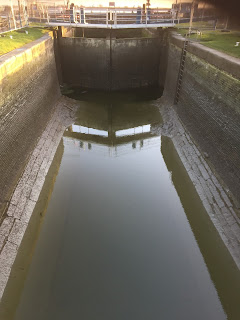 Standing on the scaffolding looking seaward. You can see the middle gate and just behind it you can see the outer gate. I didn,t realize that the bottom of locks was lined using bricks, i thought the sides would be and the bottom would just be mud. The pictures don,t really do the size of the lock any justice, its massive. I wonder how much rubbish they might of removed from the bottom??
INTERESTING STUFF..........
Posted by BRYANS ANGLE at 4.1.17