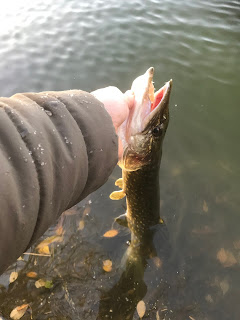 So since my last post not a lot has happened on the fishing front unfortunately. I have managed a few early morning 'before breakfast' trips in search of pike to a local and have blanked twice and managed a couple small jacks on a third trip. Its strange as the conditions seemed bang for all of these trips but the pike have had other ideas. Ive fished this water on and off for over 15 years and have caught on nearly every trip, even if it was just a small jack, but since trying back there over the past couple years i have been struggling. The only thing that i can think of that is different is that i used to fish late afternoons to last light instead of the first light sessions i do now. I reckon i,ll switch back to the afternoons and see if that will help me catch more than i have been. I know of a good few areas which i have pike in the past which i have been fishing again so maybe switching to the afternoons is the answer. I,ll keep you informed on how i get on. 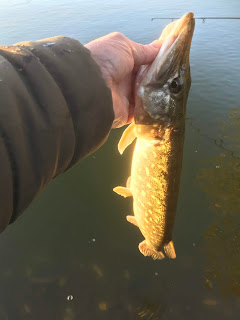 Although i,ve struggled catching pike on my local the couple i have had, and the odd aborted take, have come to my good old favourite technique of drifting a deadbait long the wind lines and into likely looking areas. The way i do this is to set the float at roughly half to three quarters of the waters depth and put on as light a lead as you can get away with to cock your chosen float with your chosen deadbait. I then hook my bait so it hangs roughly horizontally, slightly head down i favour, in the water so it looks a little like a slow moving injured fish. I personally like using coarse deads, pierced to release more juices, for this to 'match the hatch' so to speak, but i,ve had good success with smelt as well. Its not the best casting technique but plenty good enough for 30 yards or so. When the wind is putting a good chop on the water is best as it jerks the bait up and down as the float rides the waves. Its my go to method nowadays. 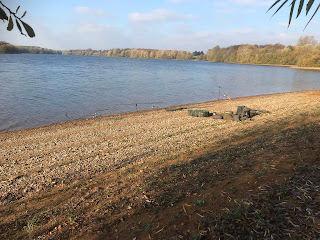 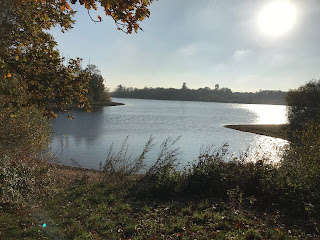 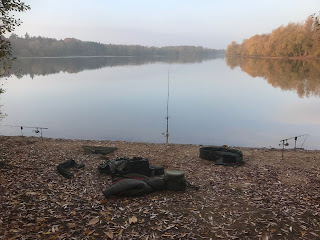 Staying on the pike fishing theme, i had a day chasing Esox on the big water mid November, my first pike trip there and what bagrueller it turned out to be. I arrived before first light, as i like to do, in my chosen section of this behemoth of a water and took the long walk to the first area to try. This was at the entrance to a bay area where a small point jutted out into the water so i could cast into the entrance to the bay to my right and out into open water in front and to the left of me. As the sun was coming up the open water was alive with silver fish dimpling and splashing as well as some bigger fish 'rolling', possibly bream or big roach, and my expectations were high as the pike had to be close by to all this activity. After a little marker float work i found out it was a gentle slop from margin to deeper water with a little drop of 15 yards or so out. Soon as i could i had a ledgered deadbait cast as far as possible towards the fish activity, which was slowly moving further away from me, another rod  with same technique was flicked to the right along the slight drop and the third rod was set up as a drifter as the wind was blowing over my shoulder away from me, perfect. Well i fished hard here until midday using everything in my arsenal to catch a fish but to no avail, i did have a little run on my rod cast 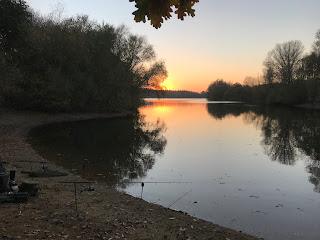 to the right but there was no teeth marks in the bait and there was a lot of grebes around so maybe one of them had grabbed it. I moved further along the bank, i say further but should say a lot further as it was over a mile trudge with all my kit, and fish the mouth of another bay for a few hours but again had no joy. The wind was stronger here and was great for drifter fishing but no pike wanted to play ball. An hour or so before sun set i made the long walk back to fish in the bay nearest to the van for the final light. And boy was it a long walk. As the sun was slowly going down and the bay started to get pretty dark as it is surrounded by trees one of my alarms burst in to life making me jump and spill my coffee. Unfortunately whatever had picked up my bait had also dropped it without the hooks taking hold. Bait checked and re-cast to the same area and just as i was clipping up the drop off my other alarm sounded. being on top of the rods this time i watched as a slow trickle of line run through the rings before i picked up the rod and struck into mid air, Bollix. Well i fished until it was too dark to see before walking back to the van and setting of for home.

It was a cracking trip on such an amazing water but the conditions were against me as it was very bright and sunny which has never bode well for me. As with all trips though i learnt a little more about the water and hopefully i,ll be back there soon chasing the toothy critters. One thing is for sure even if i don't catch anything fishing here it should keep me fit doing so as i,d walk just under 6 miles in search of fish while i was there........