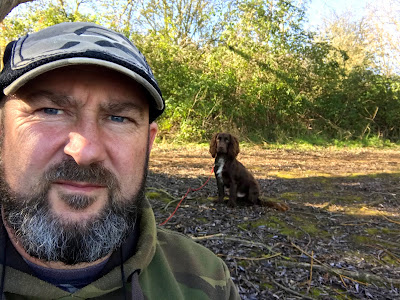 So any of you who have read my Blogs before will know that i have 2 spaniels, Paddy a Sprocker and Choccie who is a Working Cocker. Well i,ve always wanted a furry fishing buddy so have decided that i will have a go at teaching Choccie the ropes at being a 'carp dog'. He has the right temperament for it as he is very obedient, doesn,t roam too far and can quite happily keep himself entertained. i,ve taken him, along with Paddy, on a couple of sea fishing excursions on the local tidal river and both have behaved well so thought it was time to take it to the next level. 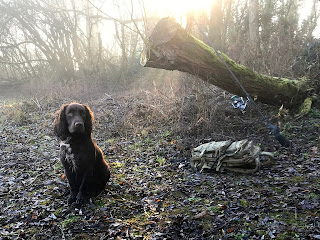 Instead of just throwing him in at the deep end i thought it best to ease him into fishing so i took him along for a mornings walk around my syndicate as i marker float around a few areas to get an idea of whats under the water. Well i have to say i am really impressed with him as he settled in nicely as i spent time casting around various areas, i did originally think he might be jumping up at anything i was trying to cast but he wasn,t bothered really and just looked on with a 'what ARE you doing Daddy' look on his face. Obviously his favourite part of the morning was walking between fishing areas but he was quite content with snuffling around and chewing sticks while i thrashed the water to a foam. I,m really happy with how he handled the day and will be taking him with me soon for my first carp session of the year. 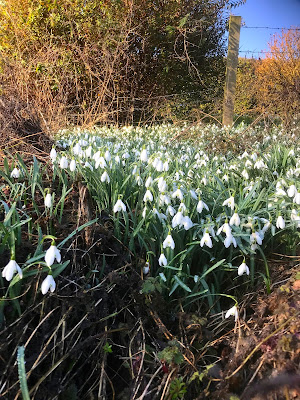