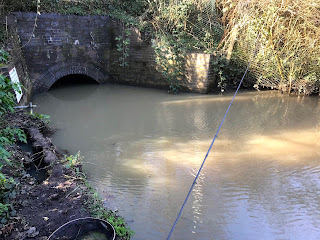 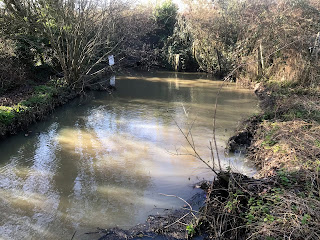 So just up the road from where i live is a small public park with a nice lake of a few acres which is run as a day ticket water. I,ve fished there a few times for the carp as it is relatively easy fishing and you can always manage to winkle out a fish or two in a couple of hours dangling. Alongside this lake is a small stream, the River Roach, which is only shallow and  an be jumped across quite easily, but at the far end of the lake the is an inlet from this stream to keep water flowing into it and to do this a small weir has been built. above this weir is a small pool of no more than 50ft long and 20ft wide which also flows out of a small tunnel beneath the railway track above. 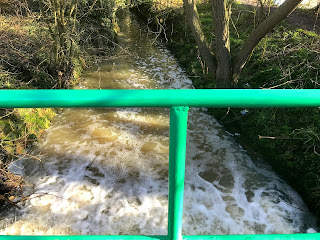 I,d heard rumours that there was a small head of silver fish in this pool and thought that i would have a little explore one morning, so armed with a little ground bait, a pint of maggots and my feeder rod i made my way along the path from the road, then along the lake itself and finally over a small railing to an area that i could set up and fish comfortably. The water was pushing through quite fast as it exited the tunnel and all manner of debris was floating by so i opted for a small swim feeder approach stuffed with a little grounbait and maggots with a size 18 hook loaded with 2 maggots. First chuck to just in front of the tunnel resulted in a couple of knocks on the tip followed by a good pull down, which i missed. A couple more of the same gave me confidence that there was indeed some fishy life in this small pool. 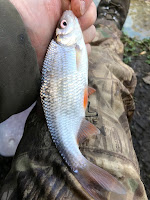 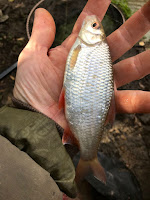 I concentrated more and when the next rattle happened i struck and was met with a good little bit of resistance which turned out to be a lovely pristine roach. A few more tidily roach followed being another half decent roach ended up in my hand. I was pleasantly surprised with the results for the first half hours fishing as i was getting a rattle on the tip almost every cast and the roach that i did catch were in a beautiful, bright silver condition. 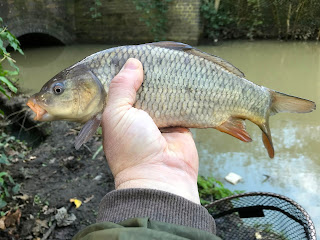 I decided to flip the feeder along my bank tight to the wall of the bridge to see if there was anything lurking there and found it was a bit deeper also. After a couple of minutes i had a rattle and set the hooks into something that just powered around the small pool, i began to think it was a really big roach when up popped a small carp of 1.5lb or so, who,d of thought there would be a carp in this tiny river but being next to a lake stuffed with the things i guess its possible. After the disturbance created by this little brute the bites went quiet for a while and i was contemplating going home for a bite to eat but thought i,d have a cast to the opposite side of the tunnel first. 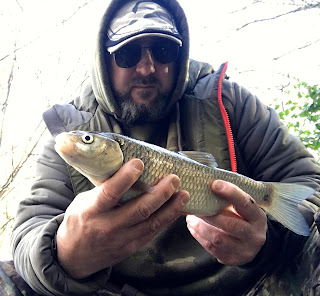 The feeder had hardly settled when the tip wrapped over and i was attached to another powerful fish running around the pool. I presumed i was playing another small carp but i could,t believe it when eventually a big pair of white lips appeared just in from of my landing net, it was a chub and a half decent one at that. On the bank and it weighed around the 1.5-2lb mark as it was a proper little fatty and, as with the roach, it was in mint condition. After a quick photo and a final admiring look i slipped him back into the pool before packing up my gear and heading back to the van.


So from a tiny little stream/river that no-one but the ducks pay attention to that runs alongside a park lake a stones throw from a town centre i managed to catch a couple dozen beautiful silvery roach, a chunky little common carp and a pristine gorgeous looking chub and its only half a mile from my front door. What more can i ask, i will return...
Posted by BRYANS ANGLE at 30.3.19