So as i was still convalescing i decided to take the dogs out for a mornings fishing for dabs and whiting at a local mark i know. I didn,t realign have high hopes of catching anything as the sun was shining and there had been a good bit of rain for the previous couple of days. Also i,d opted to fish low water, which i,ve not done here before, and the local reports were that next to nothing was being caught locally. Sod it, thought i, i,m going anyway. 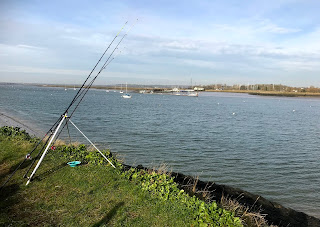 Well the sun was definitely bright and there was also quite a breeze blowing, bit nippy too to be honest but i, and the pooches, were dressed for the occasion. I set up three rods and cast them at different distances and areas with different rigs and bait on each. On rod had a whole squid with a fillet of mackerel whipped to it thumped as far as i could cast in hope of an early season ray or maybe a bass. The second rod had a 2 hook flapper set up and bait with lugworm and fish strip and was cast around 50 yards out. And the final rod was a flowing trace and light lead set up baited with lugworm and tipped with either squid or mackerel and was flipped out 20 yards so it could roll around just past the rocks and hopefully pick up anything that was swimming close in. 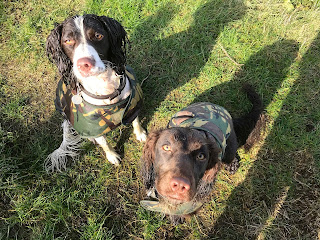 Well in a nutshell i blanked big time, i don't even recall seeing a knock on any of the 3 rod tips. I was quite disappointed to be honest as i was hoping to at least catch a tiddler but the fish weren,t playing ball. Its a very hit and miss venue to fish as you,ll blank as much as catch for some reason. It does throw up some really big fish at times but i think its just a case of being in the right place at the right time, most frustrating. I,ll still fish it though as its a beautiful place. 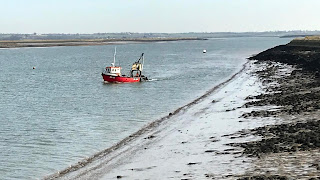 I did have this trawler dredging for shellfish constantly, while i was there, a few hundreds yards away from me so maybe there was too much disturbance for any fish to come near. There must of been some good shellfish off that point as this boat was proper going to town in this area.....
Posted by BRYANS ANGLE at 1.3.19