The sun was just rising as i made my first cast, if you can call it that as i was only fishing 3ft out from the concrete edging, into the dark waters in hope of a spiky finned perch. Before my float had even settled i got a whistle from Ryan to signal that he had a good fish on. Once netted it was placed on the unhooking mat for us to view, a cracking perch of roughly 2.5lb. As Ryan unhooked it i noticed my float had disappeared so i grabbed my rod and struck as i caught a glance of my float shooting from left to right below the surface. For a second i thought i was in contact with a big perch but it soon became apparent that the unseen fish was actually a turbo charged pike. After a good tussle for a couple of minutes the 6lb culprit was netted, unhooked and returned. And thats how the fishing carried on for a couple of hours. Ryan would have a nice perch on his worm baits and i would have a jack pike on my little livies. Strange but i get the feeling that the big perch might be shying away from my livebait, i,m wondering if maybe they are seeing my wire hooklink as i,m having to use thicker wire now as i,ve run out of my thin gauge.
At the end of our 2 hour early morning trip i had managed 4 small pike and twice as many pike hits as they were charging around the river everywhere. Ryan managed a couple of good size perch and a few smaller samples. 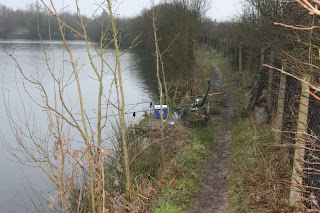 After the mornings perching i decided to spend the rest of the day after pike on a local clubwater that apparently holds some big fish, not that i,ve seen any. I plotted up in a swim which has always thrown up a few fish for me in the past. It has a very deep hole to the left of the swim and steeply shelving margins where i,ve seen small pike patrolling up and down before. I decided to sit it out here all day as the weather seemed ideal, overcast with a nice breeze, and i wanted to give every part of the swim a good go..
Well i tried all sorts of methods to try and tempt a pike but to no avail. I tried standard ledger tactics, popped up baits, half baits and whole baits both sea and freshwater. I tried float drifted sea and freshwater baits. I even tried wobbling. But unfortunately i didn,t even get a nibble.
Oh well better luck next time i hope!!!!!
Posted by BRYANS ANGLE at 9.3.11